Richard "Magic Dick" Salwitz (born May 13, 1945 in New London, Connecticut) was the harmonica player for The J. Geils Band. In addition to the harmonica, Salwitz plays the trumpet (the first instrument he learned) and saxophone. He attended Worcester Polytechnic Institute in Worcester, Massachusetts, where he met John "J" Geils and Danny Klein and became a founding member of The J. Geils Band in 1968.

In The J. Geils Band

Salwitz's harmonica playing became a major and distinctive element in the J. Geils Band's sound during their hard-rocking 1970s heyday. Critics have described his performance of "Whammer Jammer" on the J. Geils Band's live album Full House as proof of his remarkable harmonica skill.[1][2] To this day, aspiring harmonica players the world over attempt to emulate that musically challenging performance which several harmonicists have cited as the inspiration that started their interest in the instrument.[3]

Magic Dick's work on the six-minute jam "Detroit Breakdown" is a highlight of the J. Geils Band 1974 album Nightmares...and Other Tales from the Vinyl Jungle.[4]

On the track "You're the Only One" on the band's 1977 album Monkey Island, Magic Dick is found "impersonating Stevie Wonder at his most romantic" by one reviewer.[5]

After the J. Geils Band parted ways in 1985, Salwitz spent time working on a harmonica design of his own, which he labelled the "Magic Harmonica", a co-invention with Pierre Beauregard. 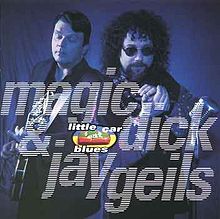 In 1992, Salwitz re-united with his old friend and band mate J. Geils and formed the band Bluestime. Bluestime featured Steve Ramsey on drums, Jerry Miller on guitar, and Roy McCloud on bass. McCloud was later replaced by Michael "Mudcat" Ward, who played with the band for several years before leaving to pursue other interests. Ward was subsequently replaced by bassist John Turner. The band was a fusion of Chicago blues and classic jazz.

The band released two records on the Rounder Records label:

Bluestime toured heavily up to at least 2002, as both a solo act and as part of B.B. King's Bluesfest. It is believed[who?] the band is currently on hiatus.

Magic Dick recently contributed his harmonica playing and some vocals as part of a live recording called "Command Performance" by the Legendary Rhythm & Blues Revue featuring The Tommy Castro Band, Deanna Bogart, Ronnie Baker Brooks, and others. He toured as part of the Legendary Rhythm & Blues Revue on different Blues Cruises, and again on land-based shows during 2007-2008.[6]