Highfield Church is a parish church in the Highfield district of Southampton, England. It is an Anglican Church in the Diocese of Winchester. 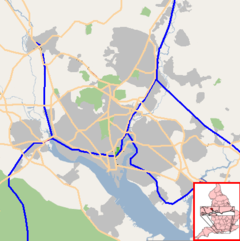 The foundation stone for Highfield Church was laid on 12 September 1846 and it was consecrated on 17 September 1847, by the Right Reverend Charles Sumner, the Bishop of Winchester. The first Minister was the Reverend Philip Raulin Robin. The legal name of the church is Christ Church, Portswood but it became commonly known as Highfield Church in 1883. 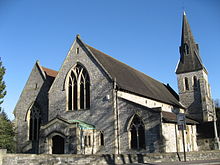 During the First World War (1914-1918) quite a number of the men from the parish went to the battlefields. Within the parish boundaries about 100 acres (0.40 km2) of land were being developed for housing so a western extension was built to accommodate the extra congregation. A First World War memorial was erected near the south door in 1921.

During the Second World War (1939-1945) Southampton was bombed heavily and there were direct hits on the parish and much loss of life. Throughout this period the clergy and members of the church kept watch on the church with a stirrup pump, buckets and shovels. The windows were given a coating of a rubber solution to lessen the danger of splintering glass.

The neighbouring church of St Barnabas was destroyed in 1940 and the two churches were temporarily merged until the rebuilding of the church at St Barnabas in 1957.

In 1941 there was an air raid where incendiary bombs fell near to the church. There was no serious structural damage to the church but windows in both the east and west ends of the church were shattered and the caretaker's quarters were destroyed. Despite the roof requiring 7000 new tiles, the morning matins went ahead. The church replaced those eastern windows that were destroyed in the blitz and these were the church's memorial to those who died in the Second World War.

The church celebrated its centenary in September 1947 with services by two previous vicars.

The church's building had grade II listed building status by 1969.[1]

The church originally had a nave, a small chancel with clerestory windows, a south aisle, and a tower with a broached oak shingled spire, which contained one bell. The architect was Joshua Brandon, who died before the building was completed and is buried in the churchyard. The walls of the church are of Purbeck Stone with mouldings of Caen Stone and the painted glass windows were created by Nixon and Ward.

The church has been built onto and altered many times since it was first built.