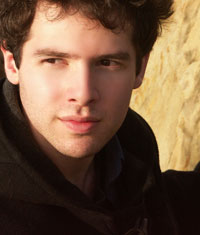 Raskin gave his first talk on user interface at age 10 at the local San Francisco chapter of [ [http://www.baychi.org/calendar/19940913/ Tuesday, September 13, 1994: Monthly Program (BayCHI) ] ] . By 20, he was speaking internationally [ [http://europython-develop.zope.nl/conferences/epc2004/info/talks/applications/jacob02 EuroPython Society - The Failure of Applications ] ] . He holds bachelor degrees in math and physics from the . He attended briefly as a Ph.D. student in Physics, continuing the Dark Matter research he had participated in at both the and .Fact|date=September 2008 The University of Chicago was the only school Raskin ever completed, having left middle school, high school, and graduate school.Fact|date=September 2008 He is also an accomplished international soloist.Fact|date=September 2008

In November 2007, Raskin and introduced , a music meta-search tool showcasing innovative interface characteristics. In the week after launch, Songza was used to play over 1 million songs and has grown in popularity since then to become one of the major contendersFact|date=September 2008 in the online music space.

In 2008, Aza and other Humanized employees were part of a hire-out by the Mozilla Corporation [ [http://humanized.com/weblog/2008/01/16/joining-mozilla/ Humanized > Weblog: Joining Mozilla ] ] , where he has been defining the direction for Firefox Mobile [ [http://www.techcrunch.com/2008/06/11/zoom-pan-throw-a-peek-at-what-firefox-mobile-could-be/ Zoom, Pan, Throw: A Peek At What Firefox Mobile Could Be ] ] . On August 26, 2008, Raskin launched the Ubiquity project at Mozilla [http://labs.mozilla.com/2008/08/introducing-ubiquity/] , which on the same day was positively reviewed in a blog posting by [http://scobleizer.com/2008/08/26/mozilla_ubiquity/] .

Raskin is also the creator of , a port of the to Javascript. [http://azarask.in/projects/algorithm-ink/]

* [http://www.alistapart.com/articles/neveruseawarning Never Use A Warning When You Mean Undo]
* [http://ajaxian.com/archives/death-of-the-desktop-by-aza-raskin Death of the Desktop]
* [http://www.humanized.com/weblog/2006/06/30/collaboration_made_simple_with_bracket_notation/ Collaboration Made Simple with Bracket Notation]
* [http://mags.acm.org/interactions/20080102/?pg=20&pm=2 The Linguistic Command Line]
* Contributor to "Phishing and Counter-Measures: Understanding the Increasing Problem of Electronic Identity Theft", ISBN 0-471-78245-9