St Enoch station was a mainline railway station in the city of Glasgow, Scotland between 1876 and 1966. It was demolished in 1977. 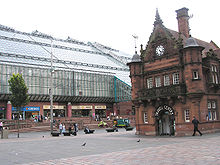 The glass St. Enoch Centre on the site of the old St Enoch mainline station in 2005, with the former St Enoch Subway station (now converted into a café) on the right

In 1883 it was taken over by the Glasgow and South Western Railway (G&SWR) and it became their head quarters.[2] Services ran to most parts of the G&SWR system, including Ayr, Dumfries, Carlisle, Kilmarnock and Stranraer. In partnership with the Midland Railway, through services also ran to England, using the Settle and Carlisle Railway from Carlisle to Leeds, Sheffield, Derby and London St Pancras.

It was the site of a rail crash in 1903 in which 16 passengers were killed and 64 injured when a train overran the buffers. In the 1923 grouping it was taken over and then operated by the London Midland and Scottish Railway. After the nationalisation of the United Kingdom rail network, the station was run by British Railways.

Model of station at the Glasgow Museum of Transport 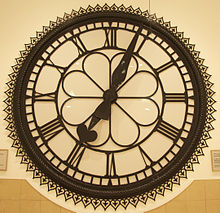 The former St. Enoch Station Clock at the Antonine Centre in Cumbernauld.

It was a large station with 12 platforms and two impressive semi-cylindrical glass/iron roofed train sheds. The station was closed on 27 June 1966[1] as part of the rationalisation of the railway system undertaken by Dr Richard Beeching; upon closure its 250 trains and 23,000 passengers a day were diverted to Central.[3] The roofs of the structure were demolished, despite protests, in 1977.[4] The clock that was suspended from the roof of the station was saved from destruction and is now on display in Cumbernauld Town Centre.[5]

The St Enoch Hotel which fronted the station was also demolished in 1977.[4]

The site of the station is now occupied by another glass structure, the St Enoch Centre, a large shopping centre. The remains of the station and hotel were used to help in fill the Queen's Dock, today the home of the Scottish Exhibition and Conference Centre (SECC).[4]

The red sandstone ticket hall which stands in St Enoch Square immediately west of the shopping centre is not part of the former rail station, but is the former ticket hall for the adjacent St Enoch subway station on the Glasgow Subway.

Though the mainline station is gone, parts of the arcaded approach embankments (now containing shops and restaurants) can be seen to the east of the shopping centre's car park on Osborne Street.[6] Although these currently go nowhere, they once connected with the Glasgow City Union Railway and the City Union Bridge of 1899 which still spans the River Clyde.

St Enoch station replaced a previous station close by called Glasgow Dunlop Street, which was opened by the City of Glasgow Union Railway on 12 December 1870[1] and closed by the Glasgow and South Western Railway the same day St Enoch opened.[1]