The first villainous version appears in the final panel of The Avengers #69 (Oct. 1969), the first chapter of a three-issue storyline by writer Roy Thomas and penciller Sal Buscema. The story arc introduced the supervillain team the Squadron Sinister, whose four members were loosely based on heroes in DC Comics' Justice League of America, with Doctor Spectrum based on Green Lantern.[1]

The Squadron Sinister are created by the cosmic entity the Grandmaster to battle the champions of the time-traveling Kang - the superhero team the Avengers. Doctor Spectrum battles the Avenger Iron Man, and is defeated when the hero deduces that the villain's Power Prism (a sentient entity called Krimonn) is vulnerable to ultra-violet light. The Avengers eventually defeat the Squadron and they in turn are abandoned by the Grandmaster.[2] Doctor Spectrum reappears in the title Iron Man and after a series of battles is defeated when Iron Man crushes the Power Prism. A powerless Obatu is arrested and deported back to his native Africa.[3]

Unknown to Iron Man, the Power Prism reforms and is found by a sanitation worker, who eventually brings it to evangelist Billy Roberts, who after learning of the Prism's abilities becomes the second Doctor Spectrum.[4]

The Squadron reappear in the title Defenders, reunited by the alien Nebulon (although the team are unaware of the fact that this a new Doctor Spectrum). The villains receive greater power in exchange for the planet Earth, and create a giant laser cannon in the Arctic to melt the polar ice caps, thereby covering the entirety of the Earth's surface in water. The superhero team the Defenders prevent the scheme and defeat the Squadron (and Nebulon), with Doctor Strange defeating Doctor Spectrum.[5] After this defeat Doctor Spectrum and his two remaining team mates are teleported off world by Nebulon, returning with an energy-draining weapon. The Squadron Sinister plan to threaten the Earth again but are defeated once again by the Defenders and the Avenger Yellowjacket.[6]

The Power Prism is kept by Yellowjacket, who decides to modify the gem and present it to his wife Janet Van Dyne (also the Avenger known as the Wasp). The Power Prism seizes control of the character and transforms her into a mind-controlled female Doctor Spectrum, who battles several Avengers but is then defeated by the Vision's use of the Prism's ultraviolet weakness (Spectrum's own arrogance meant that s/he assumed that Iron Man had kept that information to himself rather than sharing it with others and thus 'giving up an advantage'). The Power Prism bonds to the Wasp in an attempt to save itself, but is eventually removed by Billy Roberts after he is located by the Avengers. Roberts becomes Doctor Spectrum once more, although on this occasion the Power Prism is in control and seeks to bond with the most powerful Avenger, the Thunder God Thor. The Power Prism succeeds in taking Thor as a host, infecting Mjolnir to use as a focal point to control him and defeat the other Avengers, but fails to take into account that to wield Mjolnir, Thor must be "worthy". No longer worthy to wield the hammer due to him being tainted by the gem, Thor drops Mjolnir and reverts back to his mortal alter-ego Donald Blake during a fight with Iron Man, which results in the Power Prism losing control and becoming inert, apparently forever.[7]

Roy Thomas and penciller John Buscema created an alternate-universe team of heroes called the Squadron Supreme, who debut in The Avengers #85 (Feb. 1971). After an initial skirmish with four Avengers, the teams unite to stop a common threat.[9] The characters (including Doctor Spectrum) were identical in name and appearance to the Squadron Sinister, which caused confusion in Marvel's production department, as the covers of The Avengers #85 and #141 (Nov. 1975) "cover-blurbed" appearances by the Squadron Sinister, when in fact it was the Squadron Supreme that appeared in both issues.

The heroic Doctor Spectrum and the Squadron Supreme have another series of skirmishes with the Avengers engineered by the group the Serpent Cartel, but eventually team together and prevent the use of the artifact the Serpent Crown.[10] The character and his team mates briefly feature in the title Thor, when the evil version of Hyperion attacks the Earth-712 version and then Thunder God Thor.[11] The Squadron are mind-controlled by the entities the Over-Mind and Null the Living Darkness, but are freed by the Defenders and aid the heroes in defeating the villains.[12]

The character features with the Squadron Supreme in a self-titled 12-issue miniseries (Sept. 1985 - Aug. 1986) by writer Mark Gruenwald.[13] Gruenwald revealed each member's origin, with Joseph Ledger being a former astronaut who saves a Skrull in space. The grateful Skrull, called the Skrullian Skymaster, rewards Ledger with the Power Prism. The series also explains why there are the Squadrons Sinister and Supreme are similar: the Grandmaster creates the Squadron Sinister modelled on the already-existing Squadron Supreme of the Earth-712 universe.[14] Gruenwald, Ryan, and inker Al Williamson created a graphic-novel sequel[15] which maroons the team in the mainstream Marvel universe. Doctor Spectrum and team mates encounter the hero Quasar, and relocate to the government facility Project Pegasus. After another encounter with the Overmind and a visit to the laboratory world of the Stranger;[16] attempts (with the Squadron) to return to their universe [17] and with fellow members Hyperion and the Whizzer battle the entity Deathurge.[18]

The entire Squadron Supreme appear in a two-part story with the Avengers that finally returns them to their home universe, where they disband for a time.[19] Doctor Spectrtum rejoins his teammates to aid the interdimensional team the Exiles.[20] 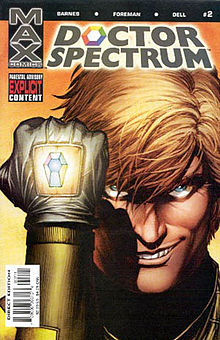 The mature-audience Marvel MAX imprint showcases the adventures of the Earth-31916 version of the Squadron Supreme. The title Supreme Power relates how Joseph Ledger, a soldier in the United States Army, accidentally bonds with a crystal found in the vessel that brings Hyperion to Earth.[21] The story continues in the limited series Doctor Spectrum, written by Sara Barnes and art by John Dell and Travel Foreman, with the experience placing Ledger in a coma, and after reliving his life in his mind for the benefit of the apparently sentient crystal, the character awakens and adopts the codename of Doctor Spectrum.[22] Operating in a military-style uniform as opposed to a prismatic costume, Doctor Spectrum encounters and battles Hyperion, forming a truce with him to hunt down a super-powered serial killer. Doctor Spectrum also begins a tentative romance with fellow superhuman Amphibian[23] Both eventually join the US-backed Squadron Supreme in the 2006 title of the same name.[24]

All versions of Doctor Spectrum derive their abilities from an alien gem called the Power Prism. The original prism, used by the Kenji Obatu and Billy Roberts versions of Doctor Spectrum, is a sentient being called Krimonn. Krimmon relates his origin in the title Iron Man, explaining how it had previously been a Skrull, who after failing to usurp the Skrull Emperor was transformed into a living prism as punishment.[25] When the Grandmaster requires champions to battle the Avengers, he retrieves the prism and grants Krimonn several energy-based powers that can be used in conjunction with a host. Kenji Obatu is the first to coin the term "Power Prism", and discovers that although trapped in prism form, Krimonn remains aggressive and asserts his will via telepathy. Krimonn's mind is "muted" by Nebulon when the Power Prism is given to Billy Roberts, although Krimonn reasserts itelf during the quest to find and bond with the character Thor. When the plan fails and the gem is shattered, Krimonn's consciousness apparently dissipated forever.

Krimonn could bestow on a host the ability to project and manipulate energy; create energy constructs of various shapes and sizes; flight; protection from the rigors of space and in the case of the original Doctor Spectrum, Kenji Obatu, the ability to become intangible. The Power Prism has one weakness: being vulnerable to ultra-violet light.

The Earth-712 Doctor Spectrum gains his power from tiny fragments of the Skrullian Power Prism, given to him by the Skrullian Skymaster, which have bonded to his skin and imbedded within his body. When the Power Prism exploded, his skin, hair, and costume were bleached chalk-white. The Earth-712 Power Prism is identical to the Earth-616 version in terms of strengths and weaknesses.

The Earth-31916 Power Prism is a sentient power source removed from the spacecraft that brings Hyperion to Earth.