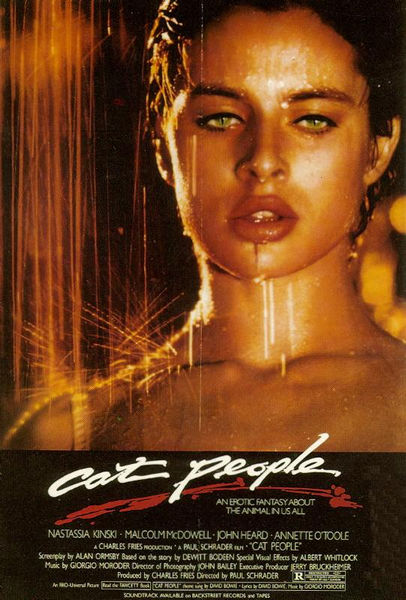 "Cat People" is a 1982 directed by and starring , , and John Heard. The film co-stars , , and features small parts for and . served as , was the , whose script was loosely based on the story by , the screenwriter for the acclaimed 1942 original.

composed the film's score, including the theme song which features lyrics and vocals by .

Irena Gallier (Natassia Kinski), a waifish young woman, meets her older brother Paul (), a minister, in New Orleans. It is the first time they have met since their animal trainer-parents died, and Irena was sent to a series of foster homes. Paul's Creole housekeeper Female (pronounced "feh-MAH-leh") () helps Irena settle into her brother's home, but Paul himself disappears. Cut to a fleabag motel where a blasé prostitute finds an angry black panther instead of a client. After mauling the hooker, the cat is captured by the police... and by a team of zoologists: Oliver Yates (John Heard), Alice Perrin (), and Joe Creigh ().

The next day Irena finds herself in the zoo where these scientists work. Drawn to the newly-captured panther, she befriends Oliver and takes a job in the gift shop nearby. Shortly afterward, the panther's violence turns deadly and it escapes. Soon, Paul turns up. He tells of his family's heritage. When a werecat has sex with a human, the werecat transforms into a panther, only by killing a human can the werecat regain human form. Only sex with a sibling prevents the transformation. The werecats are ancestrally incestuous. On the run from her dangerous brother, Irena takes refuge in a sexually-frustrated romance with Oliver... afraid of what might happen if she consummates their passion. Her brother is killed whilst in panther form. Irena is trapped. If she takes a human lover, she will have to kill to regain human form. Eventually, Irena makes love with Oliver, she transforms into a panther and flees, sparing Oliver's life. She escapes, but is later trapped on a bridge by police. Shortly after Oliver arrives at the scene, Irena sees him and jumps off the bridge and escapes. Oliver realizes where she is headed and confronts Irena at a secluded lake house, she having regained human form by killing the house's caretaker. Irena tells Oliver she didn't kill him because she loves him. Oliver realizes he can't be without her - he ties Irena's arms and legs to the posts of the bed and proceeds to make love to her, knowing what she will become...

We then see Oliver at the zoo working. He and Alice are romantically involved now. He walks to a cage that contains a black panther. Oliver casually handfeeds the panther and it's obvious the panther is Irena (in the original 1942 film, Irena commits suicide by unlocking the panther cage).

*Natassia Kinski as Irena Gallier
* as Paul Gallier
*John Heard as Oliver Yates
* as Alice Perrin
* as Female
* as Joe Creigh
* as Bill Searle
* as Det. Brandt
* as Ruthie
* as Bronte Judson

*The theme song "Cat People (Putting Out Fire)" was performed by , who wrote the lyrics to music composed by . The song was released as a single in 1982, and in 1983, Bowie included a re-recorded version of the song on his album "Let's Dance". Bowie performed the song live regularly during his 1983 "Serious Moonlight" tour.