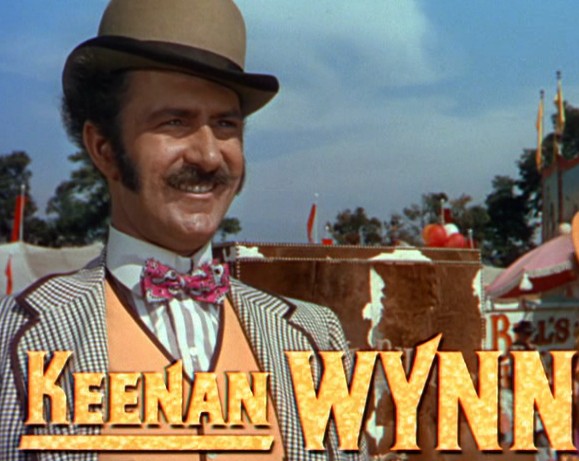 Keenan Wynn (, – , ) was an American and member of a well-known show-business family. His bristling mustache and expressive face were his stock in trade as an actor.

He was born in as Francis Xavier Aloysius James Jeremiah Keenan Wynn, the son of , and his wife, the former Hilda Keenan, but took his from his maternal grandfather, , one of the first Broadway actors to star in Hollywood.

Keenan Wynn became an actor with Ed Wynn's encouragement, and the two appeared together in the original television production of 's "" as well as a subsequent TV drama detailing the problems they'd experienced while working on that show called "". The Wynns, Serling and much of the cast and crew played themselves in that. Keenan was also in another of Rod Serling's episode of "" "A World of His Own".

Keenan Wynn appeared in hundreds of movies and shows between 1934 and 1986. Early notable Wynn performances can be seen in "", "The Clock", "", "", "" [cite news |work=Christian Science Monitor |title=Keenan Wynn, Evelyn Keyes In 'The Thrill of Brazil' |date= |page=4 |quote=For those who like South American rhythms, enjoy vigorous Brazilian dancing, and the singing of Tito Guizar, "The Thrill of Brazil," a Columbia musical starring Keenan Wynn and Evelyn Keyes, at the State and Orpheum, is a fiesta.] , and "Annie Get Your Gun". He had a featured role in "Kiss Me, Kate" and "". A brief but memorable Wynn performance came as U.S. Army Colonel "Bat" Guano in "". He appeared as villainous Alonzo P. Hawk in the "" movies, "" and "", in which his father and eldest son appeared as well. Wynn took a dramatic turn as Yost in "Point Blank" with . He played Hezakiah in the 1965 movie, "". He was the voice of the Winter Warlock in the holiday classic "Santa Claus Is Comin' to Town" and was in several Disney films, including "" (curiously, as Alonzo "A". Hawk, although the character is virtually identical to the "Flubber" versions), "", and "". He had an uncredited role in "". He also appeared in "", "Finian's Rainbow", "", "", 's "Piranha", 's "Nashville", ' "Orca", 's "" and "", and the cult favorite '. He was a regular on "Dallas" from 1979-1980, playing the part of "Digger Barnes". Both "" and ' would later be featured on the American movie-mocking television series "." He guest-starred as a quarrelsome aging actor on an episode of "". In the 2nd season (1975) of the NBC series Movin'On (Claude Akins-Frank Converse) Wynn starred as a stow-a-way in a semi-trailer hauling an elephant. Wynn co-ctarred with David Janssen in the 1972 made for TV movie Hijack! about two truck drivers hired to haul a secret cargo across the country.

Wynn was initially cast to play [ [http://www.supermanii.com/facts.php Supermanii.Com - Christopher Reeve ] ] ( and 's boss at the ) in 1978's "" in April 1977. However, by June 1977 (as production moved to in England), Wynn collapsed from extreme exhaustion after being rushed to the hospital. Wynn was ultimately replaced by .

In later years, Wynn took time to support various philanthropic groups. He was an active member of the Westwood Sertoma , in West , for many years until his death from at the age of 70. He is buried in Glendale's Forest Lawn Memorial Park.

Wynn was married to Eve Lynn Abbott (1914-2004) until their divorce in 1947, whereupon Abbott married actor . One son, actor and writer Ned Wynn (born Edmond Keenan Wynn) wrote the autobiographical memoir "We Will Always Live In Beverly Hills". His other son, Tracy Keenan Wynn, is a screenwriter whose credits include "The Longest Yard" and "".

He was uncle by marriage to the and his daughter Hilda is recently divorced from actor/singer/songwriter Paul Williams.