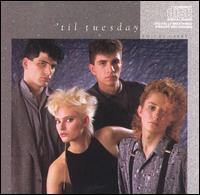 'Til Tuesday's debut single was the album's title track, which went to No. 8 on the Billboard singles chart and remains the band's best-known song. The title song was originally sung to a woman, but due to record company pressure for less controversial lyrics it was changed to be sung to a man. [ [http://www.stereosociety.com/voicescarry.html Producer Mike Thorne comments on Voices Carry] ] The "Voices Carry" video won the and was played heavily on . It depicts an oppressive boyfriend trying to convert to his upper-class lifestyle; she finally lashes out at him during a concert at , standing up from her seat in the audience and belting the lyrics ("He said, shut up! He said, shut up! Oh God, can't you keep it down?...") as she removes her cap to reveal her signature spiky, rat-tailed hair.

Except for one short establishing shot of the exterior of New York City's Carnegie Hall, the video was shot completely on-location in Boston, MA. The Strand Theater in Dorchester's Upham's Corner doubled for the interior of Carnegie Hall during the video's final crane shot.

The album's second and third singles were "Love in a Vacuum" and "Looking Over My Shoulder"; the latter peaked at No. 61 on the .

all songs: lyrics by , music by 'Til Tuesday

The popular Canadian teen drama , which is known for naming each episode after an 80s hit song or album, named a two part episode after this album.

*County singer has covered the song.