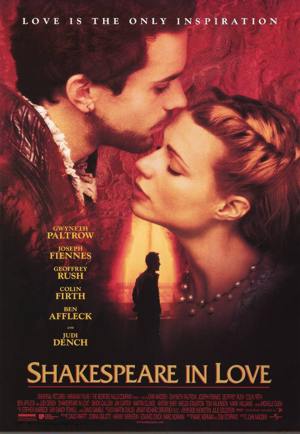 "Shakespeare in Love" is a 1998 / . The film was directed by John Madden and co-written by playwright , whose first major success was with the -influenced play "".

The film is largely fictional, although several of the characters are based on real people. In addition, many of the characters, lines, and plot devices are references to Shakespeare's plays.

The film makes no pretense at historical accuracy. The basis of "Romeo and Juliet", for example, was a poem and not one of Shakespeare's romances.

The film features many comic s: a ; a mug marked "A present from Stratford-on-Avon"; Shakespeare leaping into a ferry and saying "Follow that boat!"; remarking "Have a care with my name or you will wear it out"; and Shakespeare anticipating the phrase "!"

The characters of , , Ned Alleyn, Will Kempe, , Augustine Philips, John Hemmings (spelled in real life as "John Heminge"), George Bryan, (played in an uncredited cameo by ), and did exist, but their actions in the film are fictitious.

There were neither plantations nor English colonies in America in the 1590s. Moreover, Wessex and Viola would not have gone to Virginia; instead, Wessex would have had a surrogate run his plantations.

The film centres around the forbidden love of () and a noble woman, Viola de Lesseps ().

As the film begins, Shakepeare's patron Philip Henslowe () finds himself in debt to Hugh Fennyman (). Henslowe offers Fennyman a partnership in the upcoming production of Shakespeare's newest , "Romeo and Ethel, The Pirate's Daughter" promising that it will be a hit. This play will later be renamed "" and be reworked into a (but with some comical undertones with a few characters, like the Nurse).

Will Shakespeare is suffering from and has not completed the play, but begins auditions for Romeo. A boy named Thomas Kent is cast in the role after impressing Shakespeare with his performance and his love of Shakespeare's previous work. Unbeknownst to Shakespeare and the rest of the theater company, Kent is young noblewoman Viola de Lesseps. Viola de Lesseps's dream is to act, but as women were barred from the stage, she must disguise herself as a young man in order to fulfill her dream.

After Shakespeare discovers his star's true identity, he and Viola begin a passionate secret affair. There are strong parallels between the pair's romance and the romance in "Romeo and Juliet", including the ballroom scene from act 2 and the scene immediately following it. The element of forbidden love forms the basis of Shakespeare's inspiration, and many of their conversations later show up as some of the most famous quotes in the play.

Inspired by Viola, Shakespeare begins writing feverishly. His work in progress also benefits from the off-hand advice of playwright and friendly rival (). Yet Shakespeare and de Lesseps know that their romance is doomed. Shakespeare is married, albeit long separated from his wife, and Viola is a noblewoman whose parents would never permit her to marry a commoner such as Shakespeare. In fact, Viola's father has privately arranged a betrothal for her to Lord Wessex ().

Viola is called to the court of (), and Shakespeare dons a woman's disguise to accompany her. At court, Shakespeare manages to goad Wessex into betting the grand sum of fifty pounds that a play cannot capture the nature of true . If "Romeo and Juliet" is a success, Shakespeare as playwright will win the money. The Queen, who enjoys Shakespeare's plays, agrees to be a witness to the wager. The true purpose of the meeting is revealed when Wessex announces his intent to marry Viola.

The Lord of Revels, an official of the Queen, learns that there is a woman in the theater company at the Rose playhouse. He orders the theater closed for this violation of morality and the law. Left without a stage or lead actor, it seems that "Romeo and Juliet" must close before it even opened. Shakespeare is offered one last chance by the owner of a competing theater, the Curtain, who offers his own theater to Shakespeare. Shakespeare will take the role of Romeo himself, with a boy actor playing Juliet.

Viola learns that the play will be performed on the very day of her wedding. After the ceremony, Viola's loyal nurse () helps her slip away to the theater. In one final twist, mere moments before the play begins, the boy playing Juliet starts experiencing the voice change of puberty. Viola takes the stage to replace him and plays Juliet to Shakespeare's Romeo. Their passionate portrayal of two lovers inspires the entire audience.

The Lord of Revels arrives at the theater with Wessex, who has deduced his new bride's whereabouts. The Lord invokes the name of the Queen to arrest all there for indecency. Suddenly, Elizabeth I's voice rings out from the back of the theater: "Have a care with my name - you will wear it out!" The Queen had decided to attend the play, and says that she will handle this matter herself. Although she recognizes Viola in her guise as Thomas Kent, the Queen does not unmask Viola, instead declaring that the role of Juliet is being performed by the boy Thomas Kent.

However, even a Queen is powerless to break an official of the Church. Queen Elizabeth orders "Thomas Kent" to fetch Viola so that she may sail to America. She also states that "Romeo and Juliet" has accurately portrayed true love and Wessex is forced to pay Shakespeare the fifty pounds. This is enough to allow Shakespeare become a shareholder in a new theater. The Queen then commissions Shakespeare to write something "a little more cheerful next time." Viola and Shakespeare part, never to meet again. She must accompany Wessex to a colonial settlement in Virginia. Shakespeare immortalizes her by making the main character of his new play, , a strong young woman named Viola who also disguises herself as a boy.

* was the first choice to play . A cast reshuffle saw win the part.

*Several years before the film was finally made, was cast alongside , but both dropped out a few weeks before filming. The project then went into turnaround at , where it remained until resuscitated it.

*, , , and were all considered for the part eventually played by .

* was not considered for his role until Paltrow put him forward, supplying an audition tape to the producers that they had prepared together.

The main source for much of the action in the film is "", which the events in the film ultimately inspire Will to write. Will and Viola play out the famous balcony and bedroom scenes; like Juliet, Viola has a witty nurse, and is separated from Will by a gulf of duty (although not the family enmity of the play—the "two households" of "Romeo and Juliet" are supposedly inspired by the two rival playhouses). In addition, the two lovers are equally 'star-crossed' — they are not ultimately destined to be together (since Viola is of promised to marry and Shakespeare himself is already married). There is also a Rosaline, with whom Will is in love at the beginning of the film.

Many other plot devices used in the film are common in various Shakespearean comedies and in the works of the other playwrights of the Elizabethan era: the Queen disguised as a commoner, the disguises, mistaken identities, the swordfight, the suspicion of adultery (or, at least, cheating), the appearance of a '', and the ''. The film also features numerous sequences in which Shakespeare and the other characters utter words that will later appear in his plays:
*On the street, Shakespeare hears a preaching against the two London stages: "The Rose smells thusly rank, by any name! I say, a plague on both their houses!" Two references in one, both to "Romeo and Juliet"; first, "A rose by any other name would smell as sweet" (Act II, scene ii, lines 1 and 2); second, "a plague on both their houses" (Act III, scene i, line 94).
*Backstage of a performance of "", Shakespeare sees in full make-up, silently contemplating a skull (a reference to "").
*Shakespeare utters the lines "Doubt thou the stars are fire, / Doubt that the sun doth move" (from "Hamlet") to Philip Henslowe.
*As Shakespeare's writer's block is introduced, he is seen crumpling balls of paper and throwing them around his room. They land near props which represent scenes in his several plays: a skull ("Hamlet"), and an open chest ("").
* , as well as being Paltrow's name in the film, is the lead character in who dresses as a man after the death of her brother.
*At the end of the film, Shakespeare imagines a shipwreck overtaking Viola on her way to America, inspiring the second scene of his next play, "".
*Shakespeare writes a sonnet to Viola which begins: "Shall I compare thee to a summer's day?" (from ).

appears in the film as the master playwright whom the characters within the film consider the greatest English dramatist of that time — this is accurate, yet also humorous, since everyone in the film's audience knows what will eventually happen to Shakespeare. Marlowe gives Shakespeare a plot for his next play, "Romeo and Ethel the Pirate's Daughter" ("Romeo is Italian...always in and out of love...until he meets...Ethel. The daughter of his enemy! His best friend is killed in a duel by Ethel's brother or something. His name is .") Marlowe's "Doctor Faustus" is quoted : "Was this the face that launched a thousand ships/ And burned the topless towers of Ilium?"

The child who plays with mice is a reference to the leading figure in the Jacobean generation of playwrights. His plays ("", "") are known for their blood and gore, which is why he says that he enjoys "", and why he says of "Romeo and Juliet" when asked by The Queen "I liked it when she stabbed herself."

When the clown Will Kempe says to Shakespeare that he would like to play in a drama, he is told that "they would laugh at Seneca if you played it," a reference to the Roman tragedian renowned for his somber and bloody plotlines which were a major influence on the development of English tragedy.

Will is shown signing a paper repeatedly, with many relatively illegible signatures visible. This is a reference to the fact that several versions of Shakespeare's signature exist, and in each one he spelled his name differently.

The writers of "Shakespeare in Love" were sued in 1999 by , author of the book "The Quality of Mercy". Ms. Kellerman claimed that the story was lifted from her book, a detective novel in which Shakespeare and a cross-dressing Jewish woman attempt to solve a murder. derided the claim of similarity as " [an] absurd...publicity stunt". [cite news|url=http://news.bbc.co.uk/1/hi/entertainment/the_oscars_1999/301620.stm|title=Novelist sues Shakespeare makers|date=|publisher=BBC News|accessdate=2008-06-30] [cite news|url=http://www.cnn.com/SHOWBIZ/Movies/9903/23/shakespeare.lawsuit/|title=Writer sues makers of 'Shakespeare in Love'|date=|publisher=CNN|accessdate=2008-06-30] After the film's release, certain publications, including "", noted strong similarities between the film and the 1941 "", by and , which also features Shakespeare falling in love and finding inspiration for his later plays. In a foreword to a subsequent edition of "No Bed for Bacon" (which traded on the association by declaring itself "A Story of Shakespeare and Lady Viola in Love") , "Private Eye" insider and former writing partner of Brahms', confirmed that he had lent a copy of the novel to Stoppard after he joined the writing team, but that the basic plot of the film had been independently developed by Marc Norman, who was unaware of the earlier work.

"Shakespeare in Love" has since been used as material in the VCE (Victorian Certificate of Education) in .