Come as You Are (Nirvana song)

Come as You Are (Nirvana song)

"Come as You Are" is a song by the American grunge band Nirvana, written by frontman Kurt Cobain and released as the second single from the band's second studio album Nevermind in 1992. It was the band's second American Top 40 hit, reaching number thirty-two on the Billboard Hot 100. The music video for "Come as You Are" was directed by Kevin Kerslake, who drew inspiration for it from the cover artwork of Nevermind. In 2004, Rolling Stone named it at #445 on its "The 500 Greatest Songs of All Time" list and placed it at #452 in the 2010 reissue.[1]

"Come as You Are" was one of the few songs Nirvana recorded onto the rehearsal tape the group sent to producer Butch Vig prior to the recording of Nevermind in 1991.[2] The group recorded the song with Vig during album sessions at Sound City Studios in Van Nuys, California, in early 1991. Cobain recorded his guitar solo in two takes, as well as three takes of vocals, of which the first was used.[3] Vig then asked Cobain to double track his vocals throughout the entire song. During the harmony overdub session, Cobain accidentally sang the phrase "And I don't have a gun" too early, appearing the fourth time he sings the word "memoria" after the guitar solo. He decided to keep the mistake in the final recording. Vig sampled Cobain singing "memoria" from the middle of the song and placed it in the background of the song near the end twice.[4]

The song begins with Cobain playing an unaccompanied guitar riff for eight seconds. Cobain used an Electro-Harmonix Small Clone guitar chorus pedal to give his instrument a "watery" tone during the verses and pre-choruses. He is joined by the rest of the band for the first verse, which is moody and subdued. Once the band reaches the chorus, the song reaches full volume. The shift in dynamics is a technique Nirvana used on many of its songs. The song features one of Cobain's longest guitar solos. "Kurt really did not play a lot of solos", Vig said. "This one is more of a melodic part based on the vocal melody. It's not trying to show off pyrotechnics. It complements the melody of the song."[3]

Cobain described the lyrics of "Come as You Are" as contradictory, and said the song was about "people and what they're expected to act like".[3] Pointing to the line "Take your time, hurry up, choice is yours, don't be late", essayist Catherine J. Creswell writes that in Cobain's lyrics, "[p]hrases clump into strings of empty clichés whose own ostensible meaning is forced into contradictions or simple rhyme sound".[5] In light of Cobain's 1994 suicide by self-inflicted gunshot-wound, Allmusic's Mark Deming suggests that "[h]earing Kurt Cobain sing 'And I swear that I don't have a gun' gives 'Come as You Are' a sting it was never meant to have when [Nevermind] was first released in 1991." Deming reasons that the "don't have a gun" lyric is "[Cobain's] attempt to reassure listeners that . . . his target is the world at large rather than the individuals in it, and that there was still room in this damaged world for everyone".[6]

Wary of the similarity between the main riff of "Come as You Are" and English post-punk band Killing Joke's 1984 single "Eighties", Nirvana and its management were unsure about releasing the song as the second single from Nevermind. Danny Goldberg, head of Nirvana's management Gold Mountain, later revealed that "[w]e couldn't decide between 'Come as You Are' and 'In Bloom.' Kurt was nervous about 'Come as You Are' because it was too similar to a Killing Joke song . . . but we all thought it was still the better song to go with. And, he was right, Killing Joke later did complain about it."[7] Nirvana biographer Everett True writes that "Come as You Are" was eventually chosen for release as a single because "Goldberg favoured the more obviously commercial song".[8]

It was anticipated that the first single from Nevermind, "Smells Like Teen Spirit", would be a "base-building alternative cut", while "Come as You Are" would be able to cross over into other radio formats. However, "Smells Like Teen Spirit" became a surprise hit and boosted the band's popularity, whereas "Come as You Are" served to maintain it.[9] After its release as a single in March 1992, "Come as You Are" peaked at number 32 on the Billboard Hot 100; it was the band's second and last American Top 40 hit.[10] The single stayed on the chart for 18 weeks.[11] The song also reached number three on the Billboard Mainstream and Modern Rock Tracks charts.[10] The single also broke the UK top 10, peaking at the ninth spot.[12] This song ranked #82 in Blender's "The 500 Greatest Songs Since You Were Born",[13] and 452nd on Rolling Stone's "500 Greatest Songs of All Time".[13][1]

Although members of Killing Joke claimed the main guitar riff of "Come as You Are" plagiarized the riff of "Eighties", the band reportedly did not file a copyright infringement lawsuit, which Rolling Stone magazine attributes to "personal and financial reasons".[7] However, conflicting reports state that Killing Joke did file a lawsuit but that it was either thrown out of court,[14] or that it was dropped following Cobain's death.[15] Geordie Walker, Killing Joke's guitar player, said that the band was "very pissed off about that, but it's obvious to everyone. We had two separate musicologists' reports saying it was. Our publisher sent their publisher a letter saying it was and they went 'Boo, never heard of ya!', but the hysterical thing about Nirvana saying they'd never heard of us was that they'd already sent us a Christmas card!"[16]

The music video was directed by Kevin Kerslake, who later directed the videos for "Lithium", "In Bloom", and "Sliver". After the unsatisfactory experience filming the "Smells Like Teen Spirit" video with Samuel Bayer, Cobain selected Kerslake due to his impressionistic style. Cobain was unable to formulate any ideas beyond homaging the Nevermind album cover and including "a lot of purples and reds", so he let Kerslake conceptualize the clip.[17] The band shot outdoor footage in a park in Hollywood Hills a few days prior to the main video shoot. Kerslake projected this footage in the background of many shots in the main part of the video.[18]

The video features the band in a dark room, where the appearance of falling water in front of the band distorts and blurs the band members' faces (an idea suggested by Cobain).[17] Throughout the video, clips such as cells multiplying at an incredible rate, to a living organism in its embryotic stages are shown. The video clip also features Kurt Cobain swinging away on a chandelier throughout the room, and water begins to flow into the room. In addition, the video shows parts involving a dog wearing a cone collar. Images of a baby swimming underwater (a reference to the cover of Nevermind) and a gun floating appear. Towards the end, a clip of the band appears, with Cobain in the front, lying on the ground and kissing the camera. 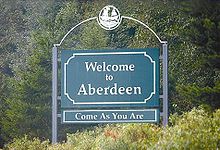 Tribute to Kurt Cobain in Aberdeen

In 2005, a sign was put up in Aberdeen, Washington, Cobain's hometown, that reads "Welcome to Aberdeen: Come As You Are" as a tribute to Cobain. The sign was paid for and created by the Kurt Cobain Memorial Committee, a non-profit organization created in May 2004 to honor Cobain. Founded by author Jeff Burlingame and Aberdeen City Councilman Paul Fritts, the Committee also plans to create a Kurt Cobain Memorial Park and a youth center in Aberdeen.[19]