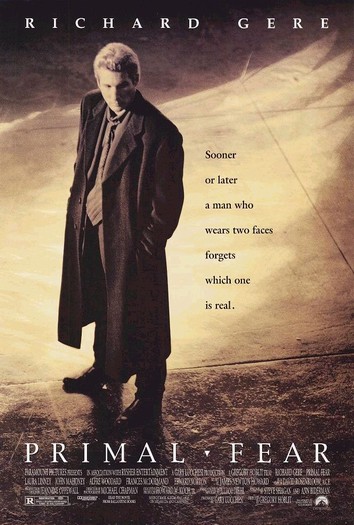 "Primal Fear" is a 1996 motion picture which tells a story of a defense attorney () who defends an altar boy () charged with the of a Catholic archbishop. The movie is an of 's novel. Norton was nominated for an for his career-launching role.

Martin Vail (Gere) is a famous defense attorney in who jumps at the chance to represent Aaron Stampler (Norton), a young altar boy accused of murdering the city's archbishop. Stampler admits to having been with the archbishop at the time of the murder, but claims that an unknown third person committed the crime while he (Stampler) had "lost time" (blacked out). At first interested primarily in the publicity that the case will bring, Vail comes to believe that his client is truly innocent.

Vail discovers that powerful civic leaders, including the , have lost millions in real estate investments due to a decision by the Archbishop not to develop certain church lands. The archbishop received numerous death threats as a result. He also learns that the archbishop had been sexually abusing altar boys, including Stampler. Introducing this evidence, while it would make Stampler more sympathetic to the jury, would also give him a motive for murder, something the prosecution otherwise lacked.

The trial does not proceed well for the defense, as there is considerable evidence against Stampler and public opinion holds him almost certainly guilty. When Vail confronts his client and accuses him of having lied, Aaron breaks down and seemingly transforms into a new persona who calls himself "Roy." Roy, unlike the meek Aaron, is a violent psychopath. He confesses to the murder of the archbishop and throws Vail against the wall, injuring him. After the incident is over, Aaron has no recollection of it. The psychiatrist examining Aaron believes he suffers from . However, as they are already in the middle of the trial, they cannot change the plea to "not guilty by reason of insanity."

Vail sets up a confrontation at the trial. After being harshly questioned by the prosecutor, Aaron turns into Roy and charges at her, threatening to snap her neck if anyone comes near him. Aaron is subdued by the court marshals and is rushed back to his cell. In light of Aaron's apparent insanity, which is now clear to the court, the judge dismisses the jury and remands Aaron to a mental hospital where he will remain under close evaluation, but will probably be released eventually.

In the final scene of the film, Vail visits Aaron to tell him this news. Aaron recalls nothing of what happened in the courtroom, having again "lost time." After hearing the news that it will be possible that he will be freed, Aaron hugs him with extreme gratitude. However, as Vail is leaving, Aaron asks him to "tell Ms. Venable (the prosecutor) I hope her neck is okay", which is not something that Aaron should have been able to remember if he had "lost time."

When Vail points this out, Stampler seems hesitant, but then admits that he was pretending to be insane all along. "So there never was a Roy" says Vail. to which Aaron answers that "There never was an Aaron, Counselor," claiming that Aaron was his pretense personality, and that he had really been Roy all the time.

Stampler further claims to have murdered the archbishop, and even his girlfriend Linda who was also abused. Stunned and disillusioned, Vail walks out of the courtroom, with Roy taunting him from the cell.

* as Martin Vail
* as Janet Venable
* as and Roy
* as John Shaughnessy
* as Dr. Molly Arrington