In general, organic sediments buried in depths of 1,000 m to 6,000 m (at temperatures of 60 °C to 150 °C) generate oil, while sediments buried deeper and at higher temperatures generate natural gas. The deeper the source, the "drier" the gas (that is, the smaller the proportion of condensates in the gas). Because both oil and natural gas are lighter than water, they tend to rise from their sources until they either seep to the surface or are trapped by a non-permeable layer of rock. They can be extracted from the trap by drilling. 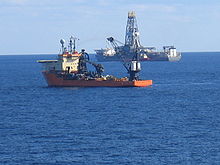 The drillship Discoverer Enterprise is shown in the background, at work during exploratory phase of a new offshore field. The Offshore Support Vessel Toisa Perseus is shown in the foreground, illustrating part of the complex logistics of offshore oil and gas exploration and production.

Like oil, natural gas is often found underwater in offshore gas fields such as the North Sea, Corrib Gas Field off Ireland, and the Scotian Shelf near Sable Island. The technology utilized to extract and transport offshore natural gas is different from land-based fields in that a few, very large rigs are usually used, due to the cost and logistical difficulties in working over water. Rising gas prices have encouraged drillers to revisit fields that, until now, were not considered economically viable. For example, McMoran Exploration has passed a drilling depth of over 32,000 feet (9754 m) (the deepest test well in the history of gas production) at the Blackbeard site in the Gulf of Mexico.[1] Exxon Mobil's drill rig had reached 30,000 feet by 2006 without finding gas; Exxon Mobil abandoned the site.