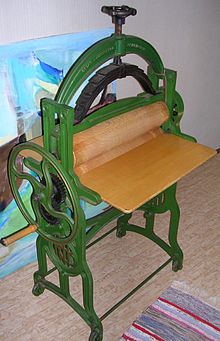 A mangle (as it is called in the United Kingdom) or wringer (as it is called in the United States) is a mechanical laundry aid consisting of two rollers in a sturdy frame, connected by cogs and, in its home version, powered by a hand crank or electrically. While the appliance was originally used to wring water from wet laundry, today mangles are used to press or flatten sheets, tablecloths, kitchen towels, or clothing and other laundry. 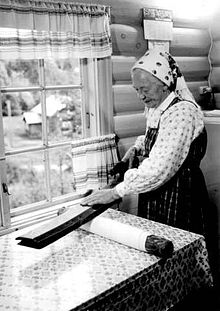 With the right hand on the handle and the left hand on the mangle, the user presses on the roll while it is pushed back and forth. Photo: Norwegian Folk Museum 1962

The Oxford English Dictionary dates the first use of the word in English from 1598, quoting John Florio who, in his 1698 dictionary, A World of Words, described "a kind of press to press buckram, fustian, or dyed linen cloth, to make it have a luster or gloss." The word comes from the Dutch mangel, from mangelen "to mangle", which in turn derives from the medieval Latin mango or manga which ultimately comes the Greek manganon, meaning "axis" or "engine".[1] Some northern European countries used a table version for centuries, the device consisting of a wood cylinder around which the damp cloth was wrapped, and a curved length of wood, the mangle, which was used to roll and flatten the cloth.

In the second half of the 19th century, steam was harnessed to laundry purposes and commercial laundries used steam-powered mangles or ironers. Gradually, the electric washing machine's spin cycle rendered this use of a mangle obsolete, and with it the need to wring out water from clothes mechanically. Box mangles were large and primarily intended for pressing laundry smooth; they were used by wealthy households, large commercial laundries, and self-employed "mangle women". Middle-class households and independent washerwomen used upright mangles for wringing water out of laundry, and in the later 19th century they were more widely used than early washing machines. The rollers were typically made of wood, or sometimes rubber.

The Steel Roll Mangle Co. of 108 Franklin St, Chicago Il. offered a gas heated home mangle for pressing linens in 1902. In the 1930s electric mangles were developed and are still a feature of many laundry rooms. They consist of a rotating padded drum which revolves against a heating element which can be stationary, or can also be a rotating drum. Laundry is fed into the turning mangle and emerges flat and pressed on the other side. This process takes much less time than ironing with the usual iron and ironing board.

There were many electric rotary ironers on the American market including Solent, Thor, Ironrite & Apex. By the 1940's the list had grown to include Bendix, GE, Kenmore & Maytag.[2] By the 1950's home ironers or mangles as they came to be called were becoming popular time savers for the homemaker. 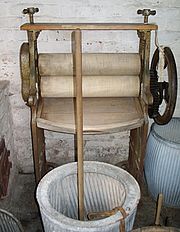 Mangle on display at the Apprentice House at the Quarry Bank Mill in the UK.

When home washing machines were first invented, they were just for washing: a tub on legs or wheels. A hand-cranked mangle appeared on top after 1843 when John E. Turnbull of Saint John, New Brunswick patented a "Clothes Washer With Wringer Rolls."[3] The first geared wringer mangle in the UK is thought to date to about 1850, when one was invented by Robert Tasker of Lancashire.[4] It was a smaller, upright version of the box mangle. 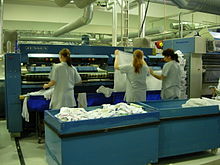 Small domestic pressing mangles may be more common in some countries than in others. They are typically not sold in North American home appliance stores or departments. One exception is the Miele Rotary Iron which is still marketed. Always an expensive consumer item, the product today sells for $2,000 or more.[5] in contrast to their use in homes, mangles have become an essential feature of commercial or large-scale laundries. They are typically used to press flat items such as sheets or tablecloths, and also are far quicker for removing most of the water than a clothes dryer. Skilled operators can also press shirts and pants on a mangle.

With some modification, they make an inexpensive alternative to an etching/relief printing press.

In the 1995 movie The Mangler, based on a fantastical short horror story by author Stephen King, a large industrial mangle (that is possessed by a demon) claims many victims' lives to satisfy its blood lust.