Steed Malbranque (born 6 January 1980 in Mouscron) is a Belgian-born French footballer who last played for Saint-Étienne. Malbranque had previously played professionally for Lyon in his native France before moving to England where he had spells with Fulham, Tottenham Hotspur and Sunderland.

He was a trainee at Lyon youth academy between the years of 1995–97 during which time he won the Under-15 championship twice, the Under-17 Cup and the reserve team championship. He also captained the French Under-18 side.

He made his professional debut for the club in a 1–1 draw against Montpellier on 21 February 1998 aged 18. He went on to play a total of 96 games for the club which included 12 appearances and 2 goals in the Champions League and 7 appearances in the UEFA Cup.

Malbranque was an unused substitute in the final as Lyon won the 2001 French Coupe de la Ligue.[2]

During his time at the club there was a chance to join Arsenal after impressing in a Champions League tie at Highbury and the following tie, a 3–0 victory over Bayern Munich at Stade de Gerland but he rejected the move as he felt he wasn't ready to play in the Premiership.[3] 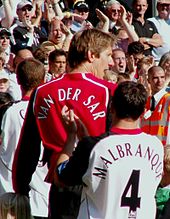 He eventually made his move to the Premier League in 2001 joining Fulham for a fee believed to be £4.5million making his debut in a 3–2 defeat at Old Trafford against Manchester United and went on to score 10 goals in his first season.

He became a firm favourite during his 5 years at the club playing a total of 211 games and scoring 44 goals including 6 appearances and 3 goals in Fulham's short-lived UEFA Cup campaign during the 2002–03 season. He was the top scorer during the 2002–03 season with 13 goals that helped save Fulham from relegation and was offered the chance to play for Belgium towards the end of the campaign, having not represented the full France side, however he turned it down with the hope that he would eventually break into the full French squad.[citation needed] He scored in Fulham's 3–1 win over Manchester United at Old Trafford in October 2003.[4]

On 13 May 2006, after extensive contract talks with the club failed, Malbranque was placed on the transfer list at Fulham after he declared his intentions to leave at the end of his contract. There was rumoured interest from Reading, Middlesbrough, West Ham United, Manchester City, Everton and Newcastle United but he opted to sign for Tottenham Hotspur on the deadline day of the transfer window (31 August) for a fee believed to be £2million despite an injury that would keep him out for approximately 10 weeks.

Malbranque made his debut for Tottenham almost ten weeks after signing for the club on 8 November at White Hart Lane playing 63 minutes in a League Cup 3–1 victory over Port Vale. He had been unable to play earlier than that after a non-essential groin operation.

He scored his first goal for Spurs in an emphatic 5–1 victory over Charlton Athletic at White Hart Lane on 9 December. Malbranque became a fan favourite at Tottenham because of his hard work ethic. Malbranque finished the 2007–08 season in the top 5 in the Premier League for tackles made and tackles per minute, which demonstrates his work ethic and tackling ability.[5]

He scored Tottenham's 150th goal in European competition with his goal in the second leg of the UEFA Cup last 16 vs Sporting Braga on 14 March 2007 at White Hart Lane. On the 12 April 2007, during the 2nd Leg of the UEFA Cup Quarter-Final against the then-defending champions Sevilla FC, Malbranque famously scored an anomalous own goal. A Sevilla corner was met with a header from Christian Poulsen. The ball appeared to be going wide of the goal until Malbranque took a wild lash at the ball to clear it and keep it in play. The ball was sliced backwards into Spurs' own net. The match ended in a 2–2 draw, but Sevilla went through to the next round on 4–3 aggregate.

He started for Spurs as they won the 2008 Football League Cup Final against Chelsea. 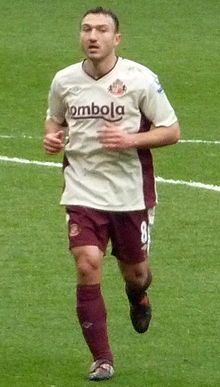 Malbranque playing for Sunderland in 2011

Malbranque followed teammates Pascal Chimbonda and Teemu Tainio to Sunderland. Malbranque signed a four-year contract on 30 July 2008.[6] He went on to score his first goal for the club with the first goal in Sunderland's 4–1 victory over Hull City at the KC Stadium.[7] Steed enjoyed his best form in a Sunderland shirt during the 2009–10 season, proving fruitful on the left wing as opposed to the right. He scored his second Sunderland goal in their FA Cup 3rd Round victory over non-league Barrow. His run of form helped Sunderland climb the table after a torrid streak of results mid-season.

Malbranque remained at Sunderland for the 2010-11 season, moving into a more central role to accommodate loan-signing Danny Welbeck. He featured in Sunderland's early seven match unbeaten run, which included games against Manchester City F.C., Arsenal, Liverpool and Manchester United. Malbranque missed a penalty in Sunderland's 2-0 victory against Stoke City. On 1 February 2011, he made his 100th appearance for Sunderland playing against Chelsea at the Stadium of Light.

Malbranque became a fans favourite during his time with Sunderland but in the 2011 Summer Transfer Window it was revealed that he was in advanced talks with French team AS St-Etienne with a view to joining them. His manager at Sunderland, Steve Bruce, stated he was surplus to requirements, and it was also revealed his transfer would loosen up funds for new summer signings as well as cut their wage bill.

On 3 August 2011 it was announced Malbranque had signed with French side AS Saint-Étienne on a two-year contract,[8] thus ending a 10 year stay in English football. A month after joining, rumours circulated that Malbranque had asked to be released from his contract due his son being ill with cancer. Malbranque eventually released a statement issued by London-based solicitors Thomas Cooper denying this :

"Steed has read with concern the recent stories currently circulating about him and his family, He would like to reassure all of his friends in England and throughout world football that these stories are wholly without foundation. Steed does not have a son and his immediate family are all in good health. Steed does not know the origin of these stories but would like to stress that they are without merit. He trusts that they will now cease immediately."

The following day, Saint-Étienne announced they and Malbranque had agreed to a mutual termination of his contract.[9]

Although born in Belgium, he was called up to the French Under 21's and was part of the squad of Les Bleus that lost to Czech U21 in the final of the 2002 UEFA European Under-21 Football Championship.

Malbranque was called into the senior France squad in February 2004 but did not make any appearances.