The Tour of Britain is a cycle race, conducted over several stages, in which participants race from place to place across parts of Great Britain.

The event dates back to the first British stage races held just after the Second World War, since when various events have been described as the Tour of Britain, including the Milk Race, the Kellogg's Tour of Britain and the PruTour. The current version of the Tour of Britain is part of the UCI Europe Tour. In 2009, the Prostate Cancer Charity became the official charity partner of the Tour.[1]

The Tour of Britain, known for many years as the Milk Race, has its origins in a dispute between cyclists during the Second World War. The British administrative body, the National Cyclists' Union (NCU), had feared since the 19th century that massed racing on the roads would endanger all racing, including early-morning time trials and, originally, the very place of cyclists on the road.[2]

A race organised from Llangollen to Wolverhampton on 7 June 1942, in defiance of the NCU, led to its organisers and riders being banned. They formed a new body, the British League of Racing Cyclists (BLRC), which wanted not only massed racing but a British version of the Tour de France.[3]

The first stage, or multi-day, race in Britain was the Southern Grand Prix in Kent in August 1944.[4] It was won by Les Plume of Manchester; the first stage was won by Percy Stallard, the organiser of the Llangollen-Wolverhampton race in 1942.

The experience encouraged the BLRC to run a bigger race, the Victory Cycling Marathon, to celebrate the end of the war in 1945. It ran from Brighton to Glasgow in five stages and was won by Robert Batot of France, with Frenchmen in six places in the top 10, winners of the mountains competition and best team.

Chas Messenger, a BLRC official and historian, said: "No one had ever put on a stage race in this country, other than the Southern Grand Prix, and even fewer people had even seen one. So raw were they that Jimmy Kain (the organiser) even wrote to the Auto-Cycle Union – the body for motorcycle racing – and the flags used by them were taken as a guide to what was needed.[4] Kain recalled the precarious budget: "£44 entry fees and £130 of my own money and £16 when I went round with the hat after the Bradford stage."[5]

"It was reported that 20,000 watched the start but I've seen a picture which would indicate it was probably three or four times that number. What outsiders didn't see though was just what a ramshackle affair it all was, with riders finishing stages often miles longer than billed then having to find a bed for the night – with the poorer riders ending up spending the night huddled in barns, haylofts or even under the hedgerows."[6]

The BLRC was not recognised by the world governing body, the Union Cycliste Internationale and so it recruited its French riders from another rebel organisation, the communist Fédération Sportive et Gymnastique du Travail, using French café-owners in Soho, London, as their link.

The Victory Cycling Marathon was run on what little money the BLRC could raise. Riders stayed in cheap boarding houses and officials used their own cars. In 1947, the News of the World gave £500 to the race, by then called Brighton-Glasgow. Within a year it pulled out again, concerned by the internal arguments that had bedevilled the BLRC from the start. The 1950 race was sponsored by Sporting Record, another newspaper, followed by the Daily Express in 1951.

"The most effective sponsor of the Tour of Britain (the Daily Express) was lost as a result of the constant bickering between rival officials and organisations. I was the press officer to the Express publicity director, Albert Asher, and saw it all happen. He was upset by the petty disagreements and decided to support the new Formula 1 motor-racing instead."[7]

Sponsorship was taken up by the makers of Quaker Oats in 1954 and then, in 1958, by the Milk Marketing Board.

The Milk Marketing Board (MMB) was a sales monopoly for dairy farmers in England and Wales. A semi-professional cyclist from Derby, Dave Orford, asked the MMB to pay for "Drink more milk" to be embroidered on the jersey of every semi-professional, or independent, rider in the country. The MMB could then advertise that races had been won because of the properties of milk and the winner would receive a £10 bonus as a result.

Orford met the MMB's publicity officer, Reg Pugh, at the board's headquarters in Thames Ditton, west of London. Orford said: "At the end of the discussion he stated that the MMB would prefer to sponsor a major international marathon. So the Milk Race, the Tour of Britain, was born, starting in 1958 and lasting for 35 years, the longest cycle sponsorship in the UK ever."[8]

The professional Kellogg's Tour of Britain began in 1987 and eight editions were completed. This Tour, particularly in its early years, was characterised by very long hilly stages, a typical example being the Newcastle to Manchester stage via the Yorkshire Dales in the 1987 event. The Prudential plc-sponsored PruTour (1998–1999) ran twice. Concerns about safety during the races contributed to both events' demise through the withdrawal of sponsorship; in the case of the Kellogg's Tour this followed a member of the public driving head-on into the peloton in the Lake District,[9] and in the case of the PruTour a police motorcyclist being killed in a collision with a motorist near Worcester.[10] 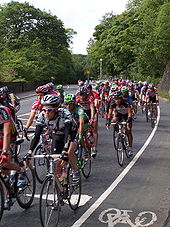 Stage 3 of the 2005 race passing through Honley, near Huddersfield

The 2004 Tour of Britain was the first edition of the latest version of the Tour of Britain. It took place over five days in early September 2004, organised by SweetSpot in collaboration with British Cycling, and was the first Tour of Britain to be held since 1999.[12] Sponsored by the organisers of London's 2012 Olympics bid, it attracted teams such as T-Mobile and U.S. Postal Service. It was designated a 2.3 category race on the Union Cycliste Internationale (UCI) calendar.

The tour climaxed with a 45 miles (72 km) criterium in London, where an estimated 100,000 spectators saw a long break by Bradley Wiggins last until the penultimate lap, before Enrico Degano of Team Barloworld took the sprint on the line. The Colombian Mauricio Ardila, of Chocolade Jacques, won the race overall.[13]

The 2005 race was run as a UCI 2.1 category in six stages starting in Glasgow on 30 August and finishing in London on 4 September: 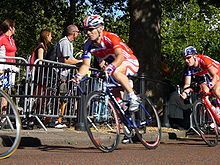 The Tour of Britain 2006 took place from the 29 August to 3 September as a UCI category 2.1 event. Martin Pedersen and Andy Schleck of Team CSC won the overall and King of the Mountains classification, respectively. Mark Cavendish (T-Mobile Team) won the points classification and Johan van Summeren (Davitamon-Lotto) the sprints classification.

The Tour of Britain was extended to seven days for 2007, with the extra day being used to run a stage in Somerset for the first time.

Instead of finishing in London, the 2007 race started in London and finished in Glasgow, which used the event to boost its bid to host the 2014 Commonwealth Games. French rider Romain Feillu won overall, Mark Cavendish won the points competition and Ben Swift won the mountains competition.

The tour increased by yet another day for 2008, with eight stages scheduled, from 7 to 14 September. The race began in London and finished in Liverpool.[14]

The sixth edition of The Tour of Britain was also raced over eight days,12–19 September. The race started in Scunthorpe and finished in London.

The 2011 edition of the Tour of Britain was held from 11 to 18 September. Stage Two was cancelled due to bad weather.[15] The general classification was won by Lars Boom.[16]