There are a number of masonic manuscripts that are historically important in the development of Freemasonry.

The Halliwell Manuscript, or Regius Poem

The Halliwell Manuscript, also known as the Regius Poem, is the first known Masonic text. It consists of 64 written pages in poetic form. The poem begins by evoking Euclid and his invention of geometry in ancient Egypt and then the spreading of the art of geometry in "divers lands." This is followed by fifteen points for the master concerning both moral behaviour (do not harbour thieves, do not take bribes, attend church regularly, etc.) and the operation of work on a building site (do not make your masons labour at night, teach apprentices properly, do not take on jobs that you cannot do etc.). There are then fifteen points for craftsmen which follow a similar pattern.

The general consensus on the age of the document dates its writing to between the late 14th century and the middle of the 15th century, and from internal evidence its author appears to have been a West of England clergyman. The manuscript was recorded in various personal inventories as it changed hands until it came into possession of the Royal Library, which was donated to the British Museum in 1757 by King George II to form the nucleus of the present British Library.

During this time, the document was generally described as a poem of moral duties. The significance of the document as relating to Freemasonry was not realized until it was featured in an article on Freemasonry by James Halliwell in 1840.

The text of the document states that Freemasonry was brought to England during the reign of King Athelstan from 924 to 939.

The manuscript is presently held by the British Library in the Royal Manuscript Collection, catalogue reference 17 A. I.

The Matthew Cooke Manuscript is the oldest of a class of about one hundred early documents known as Freemasonry's Gothic Constitutions, and the second oldest known manuscript in Masonic history.[1] Typically, the Gothic Constitutions included an invocation, a mythical legend of ancient Masonry, a list of charges and regulations for Masons, and an oath or obligation.[2]

The manuscript was published by R. Spencer, London, in 1861 and it was edited by Mr. Matthew Cooke—hence the name. In the British Museum's catalogue it is listed as "Additional M.S. 23,198", and has been dated by Hughan at 1450 or thereabouts, an estimate in which most of the specialists have concurred.

Dr. Begemann believed the document to have been "compiled and written in the southeastern portion of the western Midlands, say, in Gloucestershire or Oxfordshire, possibly also in southeast Worcestershire or southwest Warwickshire. The 'Book of Charges' which forms the second part of the document is certainly of the 14th century, the historical or first part, of quite the beginning of the 15th." (A.Q.C. IX, page 18)

It is a copy of parts of two older manuscripts which have not survived, as is indicated by a break in the text and the repetition of a portion.[3]

The Cooke manuscript was most certainly in the hands of Mr. George Payne, when in his second term as Grand Master in 1720 he compiled the "General Regulations," and which Anderson included in his own version of the "Constitutions" published in 1723. Anderson himself evidently made use of lines 901-960 of the manuscript.

The Lodge Quatuor Coronati reprinted the manuscript in facsimile in Vol. II of its Antigrapha in 1890, and included therewith a Commentary by George William Speth.[4]

The Statuts de Ratisbonne (1498) mark the transition of operative into speculative freemasonry in France.[5]

The Kirkwall scroll is a manuscript of uncertain origin which depicts several masonic devices. It hangs on the west wall of the temple of Lodge Kirkwall Kilwinning No. 38(2) in Orkney.

It is commonly claimed to be the floor cloth recorded as having been given to the lodge by Bro. William Graeme in 1785. Various legends link the scroll to the Knights Templar and location of the Holy Grail. These claims, however, have been challenged by Robert L.D. Cooper in his book "The Rosslyn Hoax?"[6]. Cooper presents evidence arguing that the scroll was made by William Graeme, or under his direction, and he dates it to the latter part of the 18th century on the basis of a detailed analysis of its symbolism.

The Constitutions of the Moderns 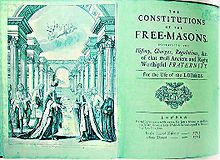 The Constitutions of the Free-Masons was a constitution written for the Premier Grand Lodge of England, to standardize the rituals and practices of Freemasonry among lodges of London and Westminster operating under that Grand Lodge. Obviously, it was not meant to apply to other lodges in other parts of England, Scotland and Ireland. The first and second edition were written by Rev. James Anderson in 1723 and 1738.

Anderson's Constitutions were based on the old masonic manuscripts (also called "Gothic Constitutions") and on the General Regulations which had been compiled first by George Payne in 1720.[7] The full title of the 1723 edition was The Constitutions of the Free-Masons, Containing the History, Charges, Regulations, &c. of that most Ancient and Right Worshipful Fraternity, For the Use of the Lodges.[8]

When in 1738, the Grand Lodge changed its name from Grand Lodge of London and Westminster into the Grand Lodge of England, the Constitution was rewritten by Anderson. The title of the second, rewritten, edition of 1738 was The New Book of Constitutions of the Antient and Honourable Fraternity of Free and Accepted Masons, Containing Their History, Charges, Regulations, &c. Collected and Digested By Order of the Grand Lodge from their old Records, faithful Traditions and Lodge-Books, For the Use of the Lodges.[9]

The 1723 edition of the Constitutions was edited and reprinted by Benjamin Franklin in Philadelphia in 1734 (online pdf edition), becoming the first Masonic book printed in America.

A new edition of the Constitutions was published in 1754, by John Entick. He reverted to the Charges as drawn up in 1723 into which, especially in the first Charge, Anderson had introduced various modifications in the 1738 edition. It is this edition of the Charges which forms the basis of the Ancient Charges to be found today in the Constitutions of the United Grand Lodge of England, with only small verbal modifications, except with regards to the first Charge on God and religion.[10]

The first section of the Constitution, on religion, stating that Masons can be of any faith and that they need only adhere to the Religion in which all Men agree, comes very close to the concept of a Natural Religion, a popular idea during the Enlightenment.

The section on religion of 1738 refers to the Seven Laws of Noah, which are a list of seven moral imperatives which, according to the Talmud, were given by God to Noah as a binding set of laws for all mankind.[11]

The Constitutions of the Antients

The Book of Constitutions, or Ahiman Rezon, of the Grand Lodge of England According to the Old Institutions, also known as the Antient Grand Lodge of England or the Grand Lodge of the Antients, was first published in 1754. Its author, Laurence Dermott, was Grand Secretary of the Antient Grand Lodge from 1752 to 1771. The full name of the first edition was Ahiman Rezon; or a Help to a Brother; showing the Excellency of Secrecy, and the first cause or motive of the Institution of Masonry; The Principles of the Craft; and the benefits from a Strict Observance thereof, etc., etc.; Also the Old and New Regulations; etc. To which is added the greatest collection of Masons' Songs, etc. A second edition was published in 1764, and subsequent editions in 1778, 1787, 1800, 1801, 1807, and 1813. The second edition was reprinted in Philadelphia in 1855 by Leon Hyneman. Dermott borrowed heavily from the Constitutions of the Grand Lodge of Ireland which had been published in 1751.

The first Charge in the Ahiman Rezon reads as follows:

The Constitutions of the United Grand Lodge of England