Władysław Dworaczek (9 September 1912 in Gliwice (Sośnica) - 22 December 2003 in Rybnik) was a Polish educator and community organiser, as well as a political prisoner in the Nazi concentration camps.

Dworaczek graduated from the elementary school in Kończyce, near the city of Zabrze, in 1932. He then entered a seminary for teachers in Pszczyna in 1938, finishing in 1948. Later he took courses in instruction of Polish language, in Katowice, where he subsequently pursued a master's degree course and graduated in 1951. He later received a master's degree in Polish philology from the University of Silesia in 1972.

Dworaczek began his teaching work on 1 August 1932 in the village of Gaszowice, working until the start of the World War II. During the Nazi occupation of Poland he was persecuted. From 1 May 1940 until 20 April 1941 he was a political prisoner in the 3 Nazi concentration camps: Dachau, Mauthausen and Gusen. After being discharged and unable to find employment in his field, he became a church organist in Halemba. In March 1945 he returned to Gaszowice, where he became the director of the elementary school until his retirement in 1972. He was also a member of the The Polish Scouting and Guiding Association, (ZHP) with the Scouting Cross No.11, one of the few that survived the Second World War in Silesia. 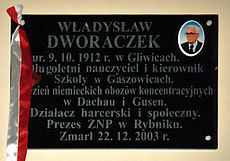