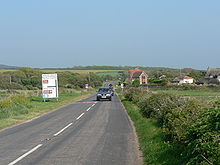 Military Road at Brook. This is the end of the clearway section, as denoted by the signs near the junction. Note also that the destination on the sign is Ventnor: despite the fact the road goes to Ryde, motorists travelling there would have a shorter journey via Brook Village and Newport.

The A3055 is an A-Class Road on the Isle of Wight in Southern England. It forms the Southern portion of the circular around-the-Island A-class loop, the northern section being the A3054. The stretch along the south-west coast of the Island is formed by the Military Road.

Because of the road's relatively short length, there are no confirmatory signs with distances, although on a few direction signs at junctions you may find the distance to the next major place. The final destination of the road (Freshwater/Totland or Ryde), in common with most UK roads, is not signed along the whole length of the route. As well as fitting with national practice, this is also because anybody wishing to travel from Totland to Ryde by road would do so via the North coast A3054, as it is much more direct. 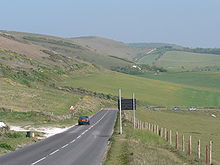 Military Road near Compton Farm (ahead). Automatically in the event of a landslide, or manually in very poor weather, the sign (to the right here) can be illuminated to close the road at this vulnerable point.

The Military Road (named as such on street maps) is the section of the A3055 regional coast road on the Isle of Wight which starts at Chale in the East and ends at Freshwater Bay in the West. The high standard of construction means that the road has needed little major work since it was built in the late nineteenth century until recent damage caused by sea erosion has caused it to be closed on several occasions for repair.[1][2][3]

The road from Chale to Niton was built as a diversionary inland route following the collapse of the previous coastal road in 1928. It is of similar construction and mostly from the same time period to the stretch to the west of Chale which was re-built and upgraded at this time. This length of road is not usually understood to be covered by the term 'Military Road' and its name on street maps and signs is different.

The section from Brook to Freshwater Bay is a clearway, so stopping on this section is only permitted at the five car parking areas, of which one is free, and the rest are operated with a charge to those who are not members of the National Trust. Along the rest of the route, there is no such restriction, but most motorists choose only to stop in designated car parks.

In Summer 2009 the Isle of Wight Council was warned that the future of the road would be under threat unless it acted quickly to preserve it. This is partly due to a new chine appearing in the cliffs making the road only 10 metres away from the cliff edge at its narrowest point. In March councillors are due to discuss whether the road is worth retaining or whether it should be abandoned. Moving the road further inland will also be discussed along with several other proposals, all of which will include consultation with bodies such as the AONB Partnership, Department of the Environment Food and Rural Affairs, Natural England, the National Trust and the Environment Agency.[4]

The harsh weather over winter 2009-10 caused a large number of landslides. By February 2010, another land slip on the section between Brook and Hanover car park, brought the cliff edge to about 5 metres away from the edge of the road. The coastal path was lost, and the council erected traffic barriers along the side of the road to alert drivers.[5]

A further landslide, on the same section, on 23 February 2010, brought the edge of the cliff to virtually the edge of the road. The road was reduced to single file, with traffic light control.[6] On 30th March the Isle of Wight Council will meet to discuss the future of the road, however have already been told the road is on its last legs with the best option being to close it off at both sides, turning it into a large cul-de-sac and improving car parking facilities on both sides.[7]