Aligoté is a white grape used to make dry white wines in the Burgundy region of France, and which also has significant plantings in much of Eastern Europe including Romania, Russia, Ukraine, Moldova and Bulgaria. With 45,000 hectares (110,000 acres), it was the 22nd most planted vine variety in the world in 2004.[1] The wine was first recorded in Burgundy in the 18th century.[2]

Aligoté is used to produce a varietal white wine, and can be used in the blend of Burgundy's sparkling wine, called Crémant de Bourgogne. In the varietal appellation Bourgogne Aligoté AOC up to 15% Chardonnay grapes may be blended in.[3] Traditionally, the cocktail kir (also known as vin blanc cassis in French) is made by adding cassis to an Aligoté white wine.

In Burgundy, where it often loses land to more prestigious grape varieties, Aligoté is often planted only in the poorer vineyard sites at the tops and bottoms of the slopes.[2] This variety is more tolerant to the cold. The grape ripens early with moderate yields and produces wines high in acidity that can be drunk young. Its aroma includes elements of apples and lemons.[3] Clive Coates says it is a variety very much of secondary importance in Burgundy which produces a light, primeur-style wine with slightly herbal flavour and rather higher acidity than the Chardonnay.[4] The village of Bouzeron which is considered to represent the region's finest examples of the variety[3] with the appellation Bouzeron-Aligoté AOC restricting the yields to 45 hl/ha compared to the Bourgogne Aligoté AOC limited to 60 hl/ha.[2]

Aligoté adds acidity and structure to other varieties when blended.[5] The grape is often blended with Sacy to complement its acidity.[6] 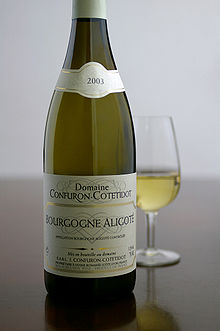 The grape is the second most popular white grape variety grown in Burgundy after Chardonnay, though it lies a long way behind in terms of planted area, with 1,700 hectares (4,200 acres)[7] against 12,800 hectares (32,000 acres).[8] The vines were once inter-planted and field blended with Chardonnay for the benefit of its added acidity but the vines have long since been separated.[9] In Burgundy the grape can be found along the fringe edges of the Côte-d'Or along Route Nationale 74. It can also be found in Mâconnais and Côte Chalonnaise.[10] There are also small plantings just east of the Rhone Valley around the city Die and in the commune of Pierrevert in the Alpes-de-Haute-Provence Communes of the Alpes-de-Haute-Provence department.[9] It has its own AOC, Bourgogne Aligoté. Aligoté is also produced in Eastern Europe,[5] Ukraine, Bulgaria, Romania and Moldova. In Bulgaria, the grape is prized for its blending qualities and high acid with more than double the quantity planted here than in the grape's ancestral home of Burgundy.[10] The grape is primarily found in the Stara Zagora Province around Chirpan.[10] In Russia it is used to make sparkling wines[5] with varietal wines being made along the coast of the Black Sea around Gelendzhik.[11] Aligoté has also been produced, although in very small quantity, by Australian wineries.[5] The wine is also grown in Washington State where it is resistant to the cold weather. The grape is also used in California, mostly for blending. The Aligoté grape is also known by the names Blanc de Troyes, Vert Blanc, Chaudenet Gris, and Plant gris.[12] There have been small, experimental plantings in Chile.[9]

DNA fingerprinting has found Aligoté to be a crossing of Pinot Noir and Gouais Blanc, which is an ancestry which is consistent with an origin in Burgundy or nearby areas of eastern France.[13][14]