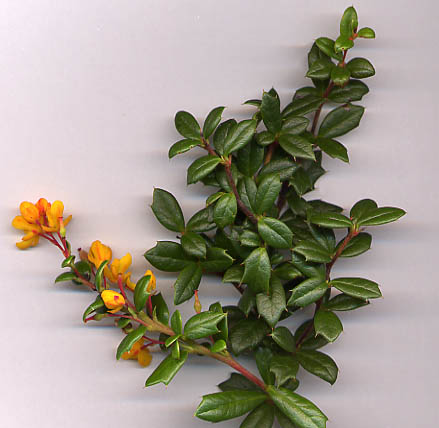 "Berberis" ("Bér-be-ris", barberry, pepperidge bush) a of about 450-500 species of and s from 1-5 m tall with thorny shoots, native to the temperate and subtropical regions of , , , and . They are closely related to the genus "", which is included within "Berberis" by some s.

The genus is characterised by dimorphic shoots, with long shoots which form the structure of the plant, and short shoots only 1-2 mm long. The leaves on long shoots are non-photosynthetic, developed into three-spined thorns 3-30 mm long; the bud in the axil of each thorn-leaf then develops a short shoot with several normal, photosynthetic leaves. These leaves are 1-10 cm long, simple, and either entire, or with spiny margins. Only on young seedlings do leaves develop on the long shoots, with the adult foliage style developing after the young plant is 1-2 years old.

The deciduous species (e.g. "Berberis thunbergii, B. vulgaris") are noted for good autumn colour, the leaves turning pink or red before falling. In some evergreen species from (e.g. "B. candidula, B. verruculosa"), the leaves are brilliant white beneath, making them particularly attractive.

The s are produced singly or in s of up to 20 on a single flower-head. They are yellow or orange, 3-6 mm long, with six s and six s in alternating whorls of three, the sepals usually coloured like the petals. The is a small 5-15 mm long, ripening red or dark blue, often with a pink or violet waxy surface bloom; they may be either long and narrow (like a bar, hence 'barberry') or in other species, spherical.

"Berberis" species are used as food plants by the e of some species including .

Several are popular shrubs, grown for their ornamental leaves, yellow flowers, and red or blue-black berries. They are also valued for crime prevention; being very dense, viciously spiny shrubs, they make very effective barriers impenetrable to burglars. For this reason they are often planted below potentially vulnerable windows, and used as hedges and other barriers.

"Berberis vulgaris" (European barberry) is the alternate host species of the wheat rust "Puccinia graminis", a serious fungal of . For this reason, cultivation of this species is prohibited in many areas.

Some "Berberis" have become when planted outside of their native ranges, including "B. glaucocarpa" and "B. darwinii" in (where it is now banned from sale and propagation), and "B. thunbergii" in some parts of North America.

The berries are edible, and rich in , though with a very sharp flavour; the thorny shrubs make harvesting them difficult, so in most places they are not widely consumed. They are an important food for many small s, which disperse the s in their droppings.

"Berberis" is often used in as a spice. Throughout the former , they are also used as the flavouring in a popular candy of the same name. In Kazakhstan the dried fruits are used to add flavour to a traditional dish Plov (lamb with rice).

"Berberis buxifolia" (Calafate) and "Berberis darwinii" (Michay) are two species found in in and . Their edible purple fruits are used for jams and infusions; anyone who tries a berry is said to be certain to return to Patagonia. The calafate and michay are symbols of Patagonia.

"Zereshk" () is the Kurdish and Persian name for the dried of "", which are widely cultivated in . Iran is the largest producer of "zereshk" and in the world. "Zereshk" and saffron are produced on the same land and the is at the same time. The province in is the main area of "zereshk" production. A garden of "zereshk" is called "zereshk-estan".

In colloquial Persian, "zereshk" is used as a term for showing dissent or disagreement, similar to the usage of "" in English. Although not a vulgar term in that context, it is not used in polite speech.fact|date= April 2008

* [http://waynesword.palomar.edu/images/berber2b.jpgPicture of packaged "Berberis" fruit] () as sold in Iran and in the US.