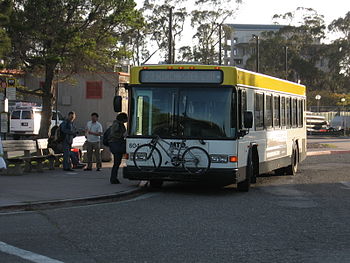 The Santa Barbara Metropolitan Transit District (MTD) is a public transit agency providing bus service in the southern portion of Santa Barbara County, California. It serves the cities of Santa Barbara, Carpinteria, and Goleta as well as the unincorporated areas of Montecito, Summerland, and Isla Vista.

Mule-powered street railways were implemented in 1875 and were gradually replaced by electric streetcars in 1896. The streetcars made their last run on July 1, 1929; about a month later, the Santa Barbara Transit Corporation company started providing local bus service (H.A. Spreitz, its owner, already operated another bus company that served the suburban areas of Goleta and Carpinteria. [1] [2] In the late 1950's and 60's, Santa Barbara Transit was losing revenue, and repeatedly threatened to go out of business. [3] [4] Strikes were also a problem, as the company could not afford to pay its employees. [5] [6] [7]

At first, the City of Santa Barbara considered subsidizing the transit company, but since service was needed to Carpinteria and Goleta as well, a transit district was thought to be a better choice, because it would also be able to levy taxes on separately. [8] [9] Voters approved the formation of the MTD in 1966. [10] However, since the new district had no funds, bus service didn't start until 1967.[citation needed] Over the years, service has expanded, particularly on routes serving the University of California, Santa Barbara and Santa Barbara City College. Bus schedules were being distributed from 1983 onwards. In March 2005 MTD implemented peak-hour commuter service (Valley Express) between Solvang/Buellton and the Santa Barbara/Goleta area.

This route serves Carrillo and San Andres on the west side of Santa Barbara. At the transit center, most Route 1 buses become Route 2.

This route runs to East Santa Barbara via Anapamu and Milpas. Interlined with Route 1.

This route serves State Street in Santa Barbara and Hollister Ave. in Goleta. Terminates at the Camino Real Marketplace near Hollister and Storke

Like Route 6, starts from Downtown SB and continues via State Hollister, but then turns south on Fairview to serve the Santa Barbara Airport and the University of California, Santa Barbara. From UCSB, alternating trips either become Route 23 or 25.

Together with Route 6, Route 11 forms the trunk of the SBMTD system.

Uses the US-101 Freeway between Downtown Santa Barbara and Downtown Goleta, then continues on Hollister to Storke, where it interlines with Route 24.

This route does double duty, serving Isla Vista commuters to Santa Barbara City College, then looping via the Mesa area (Cliff/Meigs) for passengers going to UCSB. No service is provided when either school is not in session.

Provides a quick trip between Downtown and the City College. Not in operation when SBCC is not in session.

Several short routes serving area schools. These typically provide one round trip per schoolday. These routes are open to the general public.

Local service between Downtown Santa Barbara and Carpinteria via Eastside Santa Barbara, US-101 and Via Real. Also serves Coast Village Road and southern Montecito. It is the only bus that runs through Summerland.

Like Route 20 above, but runs nonstop on US-101 between Downtown Santa Barbara and Carpinteria (no service to Montecito or Summerland). Peak hour weekday service, and some limited weekend service as well.

From UCSB, travels through Isla Vista, then via Storke to the Winchester Canyon residential area north of US-101. Alternating Route 11 trips become Route 23 at UCSB; Route 23 trips change to Route 25 trips at Hollister/Sandpiper and return to UCSB via Hollister and Storke.

Nonstop service between Downtown Santa Barbara and UCSB, then via Isla Vista and Storke to Hollister, where it interlines with Route 12x. Additional service is provided when UCSB is in session.

From UCSB, travels through Isla Vista, then via Storke to Hollister. Alternating Route 11 trips become Route 25 at UCSB; Route 25 trips change to Route 23 trips at Hollister/Sandpiper and return to UCSB via the Winchester Canyon residential area north of US-101, and Storke.

Provides additional service between UCSB and Hollister/Storke when UCSB is in session.

Loops around Carpinteria, with service provided to the northern areas of the city, as well as to the beach. Connects with Route 20 and 21x.

This is actually two routes. The Downtown route runs along State Street between Stearns Wharf and Sola St, near the Arlington Theater. The Waterfront route operates along Cabrillo between Santa Barbara Harbor and the Santa Barbara Zoo.

This route is partially subsidized by the City of Santa Barbara, and a reduced fare is charged.

The Crosstown Shuttle operates between the Westside and Eastside via Micheltorena, Chapala (eastbound) or Anacapa (westbound) and Cota. The City of Santa Barbara sponsors this service.

Provides shuttle service between Old Town Goleta (Hollister) and the shopping areas on Calle Real, just north of the US-101 Freeway.

A commuter bus system linking Solvang and Buellton with Goleta, Santa Barbara and UCSB. There are currently four round trips provided; going to Santa Barbara in the morning and coming back to Buellton and Solvang in the evening. These routes use comfortable over-the-road coaches.