The Division of Labour in Society

The Division of Labour in Society 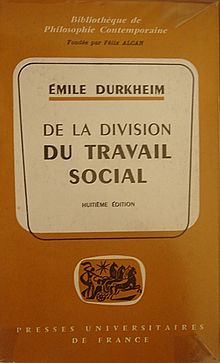 Cover of the French edition of the Division of Labor in Society.

The Division of Labor in Society (French: De La Division Du Travail Social) is the dissertation of French sociologist Émile Durkheim, written in 1893. It was influential in advancing sociological theories and thought, with ideas which in turn were influenced by Auguste Comte. Durkheim described how social order was maintained in societies based on two very different forms of solidarity (mechanical and organic), and the transition from more "primitive" societies to advanced industrial societies.

Durkheim suggested that in a "primitive" society, mechanical solidarity, with people acting and thinking alike and with a collective or common conscience, is what allows social order to be maintained. In such a society, Durkheim viewed crime as an act that "offends strong and defined states of the collective conscience."[1] Because social ties were relatively homogeneous and weak throughout society, the law had to be repressive and penal, to respond to offences of the common conscience.

In an advanced, industrial, capitalist society, the complex division of labor means that people are allocated in society according to merit and rewarded accordingly: social inequality reflects natural inequality. Durkheim argued that moral regulation was needed, as well as economic regulation, to maintain order (or organic solidarity) in society with people able to "compose their differences peaceably".[2] In this type of society, law would be more restitory than penal, seeking to restore rather than punish excessively.

He thought that transition of a society from "primitive" to advanced may bring about major disorder, crisis, and anomie. However, once society has reached the "advanced" stage, it becomes much stronger and is done developing. Unlike Karl Marx, Durkheim did not foresee any different society arising out of the industrial capitalist division of labour. He regards conflict, chaos, and disorder as pathological phenomena to modern society, whereas Marx highlights class conflict.

BOOK I THE FUNCTION OF THE DIVISION OF LABOR

Chapter I: The Method of Determining This Function

Chapter III: Solidarity Arising From the Division Of Labor, or Organic Solidarity

Chapter IV: Another Proof of the Preceding Theory

Chapter V: The Increasing Preponderance of Organic Solidarity and Its Consequences

Chapter VI: The Increasing Preponderance of Organic Solidarity and Its Consequences (cont.)

BOOK II THE CAUSES AND CONDITIONS

Chapter I: The Progress of the Division of Labor and Of Happiness

Chapter V: Consequences of the Foregoing

Chapter I: The Anomic Division of Labor