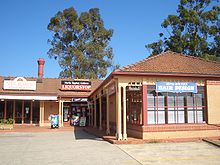 North Epping is a leafy suburb, surrounded by bushland of the upper section of Lane Cove National Park. There are many walking trails, including the Great North Walk. One of the well known landmarks is Whale Rock.

The Wallumedegal Aboriginal tribe lived in the area between the Lane Cove River and Parramatta River, which was known as Walumetta.

In 1792 Governor Phillip began the granting of parcels of lands to marines, and the area was referred to on Phillip's maps as the Field of Mars, named after the Roman Field of Mars probably because of the military link. It contained the area of what is now Epping and North Epping. The name Epping is derived from Epping Forest in Essex, England.[2]

In the early hours of 18 July 2009, the Lin family, consisting of Min Lin, Yun Li Lin, her sister Yun Lin, and the parents' two children Henry and Terry Lin, were all murdered at their home on Boundary Road, North Epping. Robert Xie was arrested at his home in North Epping on 5 May 2011 at 9.00am for killing the family. He is yet to be charged. Brenda Lin, the last member of the family still alive today, stayed and lived with the killer of the family, for 22 months. A funeral was held for the family at Sydney Olympic Park, New South Wales on 8 August 2009, with Seven News crime reporter Robert Ovadia being the MC. This incident occurred eight years after Sef Gonzales murdered his entire family nearby, who as a result was given multiple life sentences.

North Epping has a small shopping centre located on the corner of Roma Street and Malton Road. It features a number of specialty shops, cafes and restaurants.

The M2 Hills Motorway runs along the southern border to the Sydney CBD. North Epping is connected to adjacent Epping by a single road, Norfolk Road. Norfolk Road runs south to Epping Road, a major arterial road in the area that runs east to the Pacific Highway.

North Epping is under the municipal authority of Ward C in the Hornsby Shire Council, is part of the federal electorate of Bennelong and State electorate of Epping.