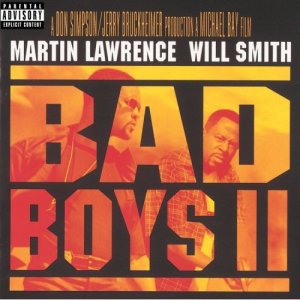 "Bad Boys II" is the soundtrack to the 2003 action-comedy film "", released on , through Bad Boy and . The album peaked at number one on the "Billboard" 200, selling 324,000 units in the first week, becoming one of few soundtracks to reach the position. [ [http://www.mtv.com/news/articles/1474594/20030723/jay_z.jhtml 'Bad Boys' Make Good on "Billboard" Albums Chart] . MTV. Accessed , .] On , , the certified the album platinum with over one million units shipped. [ [http://www.riaa.com/goldandplatinumdata.php?resultpage=1&table=SEARCH_RESULTS&action=&title=bad%20boys%20ii&artist=&format=&debutLP=&category=&sex=&releaseDate=&requestNo=&type=&level=&label=&company=&certificationDate=&awardDescription=&catalogNo=&aSex=&rec_id=&charField=&gold=&platinum=&multiPlat=&level2=&certDate=&album=&id=&after=&before=&startMonth=1&endMonth=1&startYear=1958&endYear=2007&sort=Artist&perPage=25 "Bad Boys II" Searchable Database] . RIAA. Accessed , .]

The soundtrack became the first album to be released under the and partnership. [ [http://movies.about.com/cs/badboys2/a/badboys2sound.htm "Bad Boys II" Soundtrack News] . About.com (, ). Accessed , .] As the album's executive producer, stated:

P. Diddy shared his views on the album, saying "it's not just one of those soundtracks where it's just a compilation record and it's not cohesive... These are all new songs. I've done a lot of work [and] I've produced almost everybody that's on the soundtrack, or I've paired on a record with them before. I'm in constant contact with them. I think that everyone respected the fact that I wanted to do something that was special".

The album received generally positive reviews from s. noted that it is rare for a hip hop movie soundtrack to "be explosive and feel as if it's a solid cohesive album, rather than a showcase for various artists to use throwaway tracks". [Theakston, Rob. [http://www.allmusic.com/cg/amg.dll?p=amg&sql=10:hxfrxqtaldfe~T1 Bad Boys II Review] . All Music Guide. Accessed , .] "" concurred, saying "this is how to do a hip-hop soundtrack". [Walters, Barry (, ). [http://www.rollingstone.com/artists/beyonce/albums/album/296982/review/6212333/bad_boys_ii Bad Boys II Review] . "Rolling Stone". Accessed , .] "Blender" magazine observed that the record is "riddled with stars", "packed with production pyrotechnics", and called the album "pure Hollywood". [Weiner, Jonah (2003). [http://www.blender.com/guide/reviews.aspx?id=1759 Bad Boys II Soundtrack] . "Blender" magazine. Accessed , .]

succession box
before = "Chapter II" by Ashanti
title = "Billboard" 200 number-one album
years = , – ,
after = "Greatest Hits Volume II and Some Other Stuff"
by