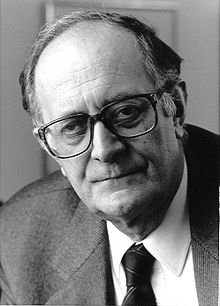 Cornelio Sommaruga (born December 29, 1932 in Rome) is a prominent Swiss humanitarian, lawyer and diplomat who is best known for being President of the International Committee of the Red Cross (ICRC) from 1987 to 1999. Today, he chairs the Geneva International Centre for Humanitarian Demining (GICHD) in Geneva. He is also active on a number of boards, such as the International Union Against Cancer. Currently he is Chair of the Board of Directors of the Foundation For the Future, a group dedicated to promoting human rights in the middle east and Africa,[1] and the honorary President of Initiatives of Change International,[2] a global organization dedicated to "building trust across the world's divides"[3] of culture, nationality, belief, and background.

Cornelio Sommaruga was born in Rome, Italy, where his father had a professional activity as a commercial lawyer and was stationed during WWII at the Swiss embassy responsible for foreign interests. In fact, he spoke Italian long before he learned German. He was brought up by Catholic parents and remained a devout Christian throughout his life. He was profoundly influenced by his early years in Rome. The period in which his father represented Liberia at the Vatican probably inspired him the most in terms of his long diplomatic and humanitarian career. Despite his connection to Rome, he has close ties with Ticino, his family's canton of origin.

He went to grammar and high school in Italy and attended university in Zurich, Switzerland, where he obtained a doctorate in law in 1957. It was only during this period that he learned German, one of the four national languages of Switzerland.

Cornelio Sommaruga entered the Swiss diplomatic corps after working two years in the banking sector from 1957 to 1959. He served as a diplomat in The Hague, Rome, Geneva and Bern. From 1968 to 1973, he was the deputy of the Swiss delegation to the European Free Trade Association (EFTA) and the senior representative to United Nations Conference on Trade and Development, General Agreement on Tariffs and Trade (GATT) and the United Nations Economic Commission for Europe (UN/ECE), where he further developed his diplomatic and negotiating skills. From 1973 to 1975, he served as the deputy to the Secretary General of EFTA in Geneva. From there, he returned to Bern where he held senior posts at the Office of Foreign Affairs of the Swiss government, i.a. as Ambassador, Delegate for Trade Agreements. From 1984 to 1987, he was Undersecretary of State at the Office of Foreign Economic Affairs, a job he left when he was nominated to the International Committee of the Red Cross (ICRC) in 1986.

Cornelio Sommaruga served as President of the ICRC from 1987 to 1999, succeeding Alexandre Hay. During his tenure, the budget and the international activities of the Committee increased considerably. He maintained the neutrality of the ICRC while keeping close ties to all governments of States signatories of the Geneva conventions. One of his initiatives was to propose in 1992 the introduction of the a new additional Red Crystal symbol symbol representing the Red Cross movement, alongside with the Red Cross and Red Crescent.

Among his challenges at the ICRC were:

Sommaruga was the founding President in April, 2002 of Initiatives of Change International [1], a voluntary association of independent national legal bodies of Initiatives of Change (IofC). As head of this international movement working to build bridges of trust across the world's divides, he was able to support peace and reconciliation initiatives in Africa's Great Lakes region and in Sierra Leone. He continues to serve on a number of charitable and corporate boards.

Israel refused to cooperate with a team appointed by United Nations General Secretary Kofi Annan in 2002 to investigate allegations of a massacre in Jenin, partly because Cornelio Sommaruga was personally unacceptable to the Israeli government, due to allegations that he had made a remark comparing the possibility of ICRC official recognition of the Red Star of David emblem (Magen David Adom, see Emblems of the International Red Cross and Red Crescent Movement) to recognition of a "Red Swastika".[4]

Despite an intense political and management career, Cornelio Sommaruga maintained strong family ties. Family gatherings were extremely meaningful to him in his early years, and as a result, Dr. Sommaruga has promoted strong family social values among his family just as in the institutions with which he worked. He married Ornella Marzorati in 1957 and he and his wife have six children. He and his family have preserved the ritual of annual family reunions at the same time each year, gathering their children and 15 grandchildren.