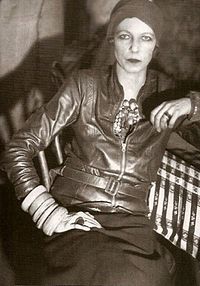 Nancy Clara Cunard (10 March 1896 – 17 March 1965) was a writer, heiress and political activist. She was born into the British upper class but strongly rejected her family's values, devoting much of her life to fighting racism and fascism. She became a muse to some of the 20th century's most distinguished writers and artists, including Wyndham Lewis, Aldous Huxley, Tristan Tzara, Ezra Pound and Louis Aragon, who were among her lovers, Ernest Hemingway, James Joyce, Constantin Brâncuşi, Langston Hughes, Man Ray, and William Carlos Williams. In later years, she suffered from mental illness, and her physical health deteriorated. She died at age 69, weighing only 26 kilos (57 pounds), in the Hôpital Cochin, Paris.

Her father was Sir Bache Cunard, an heir to the Cunard Line shipping businesses, interested in polo and fox hunting, and a baronet. Her mother was Maud Alice Burke an American heiress, who adopted the first name Emerald and became a leading London society hostess. Nancy had been brought up on the family estate at Nevill Holt, Leicestershire but when her parents separated in 1911 she moved to London with her mother. Her education was at various boarding schools, including time in France and Germany.

She had a short-lived marriage during World War I to Sydney Fairbairn, a cricketer, an army officer and wounded war veteran; it lasted less than two years before they separated. She was also at that time on the edge of the influential group The Coterie, associating in particular with Iris Tree.

She contributed to the Sitwell anthology Wheels, providing its title poem; it has been said that the venture was originally her project.[citation needed]

Cunard's lover Peter Broughton-Adderley was killed in action in France less than a month before Armistice Day,[1] within the year she announced her engagement to Fairbairn. Many who knew her claimed that she never fully recovered from Adderley's loss.

In 1920 Nancy Cunard moved to Paris, where she became involved with literary Modernism, Surrealists and Dada. Much of her published poetry dates from this period. During her early years in Paris, she was close to Michael Arlen.

A brief relationship with Aldous Huxley influenced several of his novels. She was the model for Myra Viveash in Antic Hay (1923) and for Lucy Tantamount in Point Counter Point (1928).[2]

It has been suggested that she became dependent on alcohol at this time, and may have used other drugs.[3]

In 1927 Cunard moved into a farmhouse in La Chapelle-Réanville, Normandy. It was there in 1928 that she set up the Hours Press. Previously the small press had been called Three Mountains Press and run by William Bird, an American journalist in Paris, who had published books by its editor from 1923, Ezra Pound, William Carlos Williams' The Great American Novel, Robert McAlmond and Ernest Hemingway's In Our Time. Cunard also wanted to support experimental poetry and provide a higher-paying market for young writers; her inherited wealth allowed her to take financial risks that other publishers could not. Hours Press became known for its beautiful book designs and high-quality production.[4]

It brought out the first separately published work of Samuel Beckett, a poem called Whoroscope (1930) and also Pound's A Draft of XXX Cantos. Cunard published old friends like George Moore, Norman Douglas, Richard Aldington, Arthur Symons and Henry-Music, a book of poems from various authors with music by Henry Crowder, but also two books by Laura Riding, The Collected Poems of John Rodker, poems by Roy Campbell, Harold Acton, Brian Howard, Walter Lowenfels and Words by Bob (Robert Carlton) Brown. By 1931 Wyn Henderson had taken over day-to-day operation of the press and in the same year it published its last book, The Revaluation of Obscenity by sexologist Havelock Ellis.[5]

In 1928 (after a two-year affair with Louis Aragon) she began a relationship with Henry Crowder, an African-American jazz musician who was working in Paris. She became an activist in matters concerning racial politics and civil rights in the USA, and visited Harlem. In 1931 she published the pamphlet Black Man and White Ladyship, an attack on racist attitudes as exemplified by Cunard's mother, whom she quoted as saying "Is it true that my daughter knows a Negro?"[6] She also edited the massive Negro Anthology, collecting poetry, fiction, and nonfiction primarily by African-American writers, including Langston Hughes and Zora Neale Hurston.[7] It also included writing by George Padmore and Cunard's own account of the Scottsboro Boys case. Press attention to this project in May 1932, two years before it was published, led to Cunard's receiving anonymous threats and hate mail, some of which she published in the book, expressing regret that "[others] are obscene, so this portion of American culture cannot be made public."[citation needed]

In the mid-1930s she took up the anti-fascist fight as well, writing about Mussolini's annexation of Ethiopia and the Spanish Civil War. She predicted, accurately, that the “events in Spain were a prelude to another world war”. Her stories about the suffering of Spanish refugees became the basis for a fundraising appeal in the Manchester Guardian. Cunard herself helped deliver supplies and organize the relief effort, but poor health — caused in part by exhaustion and the conditions in the camps — forced her to return to Paris, where she stood on the streets collecting funds for the refugees.[7]

In 1937, she published a series of pamphlets of war poetry, including the work of W. H. Auden, Tristan Tzara and Pablo Neruda. Later the same year, together with Auden and Stephen Spender, she distributed a questionnaire about the war to writers in Europe; the results were published by the Left Review as Authors Take Sides on the Spanish War.[8]

The most famous response was not included: it came from George Orwell, and began: "Will you please stop sending me this bloody rubbish. This is the second or third time I have had it. I am not one of your fashionable pansies like Auden or Spender, I was six months in Spain, most of the time fighting, I have a bullet hole in me at present and I am not going to write blah about defending democracy or gallant little anybody..." [11]

During World War II, Cunard worked, to the point of physical exhaustion, as a translator in London on behalf of the French Resistance.

After the war, she gave up her home at Réanville and travelled extensively. She suffered from mental illness and poor physical health, worsened by alcoholism, poverty, and self-destructive behavior.[7] She was committed to a mental hospital after a fight with London police; but, after her release, her health declined even further, and she weighed only sixty pounds when she was found on the street in Paris and brought to the Hôpital Cochin, where she died two days later.[7][12]

Her body was returned to England for cremation and the remains were sent back to the Cimetière du Père-Lachaise in Paris. Her ashes rest in urn number 9016.[citation needed]

According to an account of drafts of the poem "Nancy Cunard", by Mina Loy, held in the Yale University Library,

Drafts of Loy’s poem about Nancy Cunard, her friend, fellow poet, and editor of The Hours Press, provide a window on her [Loy's] creative process. The final, published version of the poem ends with lines derived from this draft’s beginning and its final lines are now the poem’s center:

The vermilion wall
receding as a sin
beyond your moonstone whiteness,
Your chiffon voice.[13]