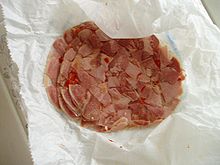 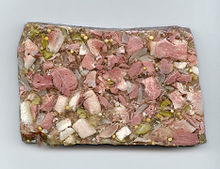 Head cheese (AmE), or brawn (BrE), is a cold cut that originated in Europe. A version pickled with vinegar is known as souse. Head cheese is not a cheese but a terrine or meat jelly made with flesh from the head of a calf or pig (sometimes a sheep or cow), and often set in aspic. Which parts of the head are used can vary, but the brain, eyes, and ears are usually removed. The tongue, and sometimes even the feet and heart, may be included.

Head cheese may be flavored with onion, black pepper, allspice, bay leaf, salt, and vinegar. It is usually eaten cold or at room temperature as a luncheon meat. It can also be made from quality trimmings from pork and veal, adding gelatin to the stock as a binder.

Historically, meat jellies were made of the cleaned (all organs removed) head of the animal, which was simmered to produce stock, a peasant food made since the Middle Ages. When cooled, the stock congeals because of the natural gelatin found in the skull. The aspic may need additional gelatin, or more often, reduction in order to set properly. 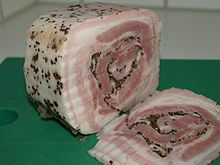 Austria
In Austria, head cheese is known as Presswurst or in the most western parts it is called Schwartamaga.
Bulgaria
In Bulgaria, the meal пача (pacha) is prepared from pig's heads (primarily the ears), legs, and oftentimes tongue. The broth is heavily seasoned with garlic before cooling.
Croatia
This cut is generally known as hladetina, and is commonly produced after the traditional slaughter of pigs. A strongly seasoned version of this cut is called tlačenica or švargla (the latter being a loan-word from German). The name švargl is used for a variant where the chopped parts are stuffed inside the pig's stomach, similar to Scottish haggis.
Czech Republic
In Czech Republic, the huspenina or sulc (from German Sülze) is made from pig's heads and/or legs boiled together, chopped, mixed into their own broth, poured into a pan and left in the cold in order to solidify. Other ingredients are onion, pepper, allspice, bayleaf, vinegar, salt, carrot, parsley, root celery, sometimes eggs. There is a similar product known as tlačenka, which is basically huspenina with some more meat, chopped liver and various offal, poured into a prepared pig stomach and left to solidify under the weight. Tlačenka is generally thicker than huspenina and it is commonly eaten with chopped onions, sprinkled with vinegar.
Denmark, Norway and Sweden
Sylte or Sylta, a pork head cheese seasoned with allspice, bay leaves, and thyme, is part of the traditional Christmas smörgåsbord, served on rugbrød or Lefse with strong mustard and pickled beetroots. Sylte is often prepared from other pork cuts than the head, especially the leaner versions.
Estonia
Sült, similar to the German or Croatian dish (the name is a loan as well), but usually less seasoned and made from higher quality meat. Sometimes carrots or greens are added. A traditional Christmas dish.
Finland
In Finland head cheese is known as syltty, tytinä or aladobi
France
Referred to as fromage de tête, tête pressée, tête fromagée (which translates as "cheesed head") or pâté de tête. 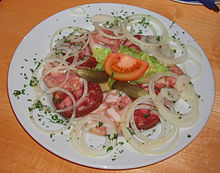 Germany
In Germany head cheese is known as Sülze, Schwartenmagen, or Presskopf. In Bavaria Presssack comes in three varieties (deep red, pinkish, and grey) in the form of a large (15 cm diameter) sausage. Sülze can have a tangy flavour due to the addition of pickles or vinegar. It usually takes the form of a rectangular loaf, which is then sliced into portions. There is a white coloured variety and two different red ones, using blood, one made with beef tongue (as in Zungenwurst) and aspic, the other without. In Franconia Saurer Presssack is served in a salad with a vinaigrette and vegetables. 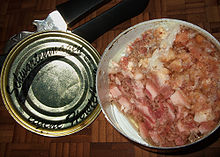 There are early references to Sulcze in documents of the Counts of Katzenelnbogen dating from 1410 and 1430.[1]
Hungary
A variant of head cheese is malacarc,[citation needed] disznósajt or disznófősajt ("pig cheese" or "pig head cheese"), made of mixed meat slices (especially from the head of the pig[2]), spices, paprika, and pieces of bacon cooked in spicy stock. The chopped meat is stuffed inside the pig's stomach, similar to Scottish haggis. Usually it is smoked like the sausages or the ham.
Iceland
Sviðasulta is a form of head cheese, made from svið, singed sheep's head, sometimes cured in lactic acid.
Italy
In Genoa a similar cold cut goes by the name of testa in cassetta, literally "head in a box", but it is possible to find it throughout the entire central and northern Italy, where it is called coppa di testa, or simply coppa, or – in some northern regions – formaggio di testa (literally, "head cheese"). In central Italy (Lazio, Umbria), it is common to put orange peel pieces in it, or to serve it in a salad together with oranges and black olives.
Lithuania
Košeliena (deriving from "košė", that means "pulp", "squash") or 'Šaltiena' (deriving from "šalta", that means "cold", and refers to way of serving the dish), usually made from pig's feet, sometimes part of head is added.

Netherlands and Belgium
Headcheese is known under several regional names and variations. Brabant: In Brabantic it is called zult and is made with blood. Pig's foot provides the gelatin and a little vinegar is added to the head cheese. Limburg: In Limburgisch it is called hoofdkaas, meaning head cheese, and is eaten on bread or with Limburgisch sausage as a starter. There's a red, sweet variety and a slightly Sour, grey variety. The red one can be compared to Brabantic zult. zult and preskop are also found in Limburg though the zult is less sour whereas the preskop often contains black pepper and is eaten on wholewheat bread. In Belgium, head cheese is also called kop or kopvlees, which translates as meat from the head.
Poland
In Poland, head cheese is referred to as salceson, a name possibly derived from saucisson, the French word for a type of sausage. There are several varieties of salceson which depend on the ingredients: Black Salceson which contains blood, White Salceson made with a mixture of seasoned meats without blood, and Ozorkowy (Tongue) Salceson where the major meat component is tongue.
Portugal
In Portugal, this delicacy is known as cabeça de xara and it is mainly prepared in the Alentejo region.[3]
Romania
There are two versions of it: The first is called "tobă" (same word as for "drum") or, especially in Transylvania, "caş de cap de porc" (literally "pork head cheese"), which looks like huge sausage, 4 inch diameter. The other form, which presents only similarities with central european "head cheese", is "piftie" (the same dish as Serbian Pihtije) in which the contents are poured into a bowl which is then refrigerated. Not necessarily made of head meat, but also from different kinds of meat, boiled with garlic and bayleaves.``Piftie`` has a more different way of preparing,usually the feet of the pig are boiled, to make a soup, those feet are used because they contain a lot more gelatin than any other part of the pig.The soup is then cooled and makes a jelly.Usually garlic is added.
Russia and Ukraine
In Russia and Ukraine head cheese is a popular food. In Ukraine it is called "kovbyk" ("ковбик"). Head cheese is served on festive occasions such as Christmas. Head cheese is also popular in the Jewish community. It is more popularly called saltisón ("салтисон").
Slovakia
A special variety of head cheese, called tlačenka (literally "pressed one"), is very popular in Slovakia. It is made of pork stomach stuffed with offal and leftover parts of pig's heads and legs. It is seasoned with garlic, paprika, black pepper, and other ingredients and usually smoked. It is traditionally served with sliced onion, vinegar, and bread.
Huspenina (also called studeno literally meaning cold one) is similar to a certain extent, but made with less meat and more gelatine. It is more similar to aspic, pork jelly, or hladetina.
Slovenia
In Slovenia is known as tlačenka, literally "pressed-one". Informally is also known as žolca.
Spain
This cold cut is known as cabeza de jabali, literally "boar's head".
Sweden
Sylta, a few variations are available with different meats, spices and preparation methods, the most popular being "pressylta (pressed head cheese)" and "rullsylta (rolled head cheese)". They are often regarded as a seasonal food eaten at christmas.
United Kingdom
In England and Wales, head sausage is referred to as brawn or (in Yorkshire and Norfolk) pork cheese. In Scotland, it is known as potted heid (potted head of a cow, pig or sheep); the similar potted haugh/hough is made from the shin of the animal.

Various versions exist around the world:

China
In certain parts of China, such as Tianjin, 'yaorou' (肴肉) is eaten. It is made by boning and pickling pig trotters with brine and alum. The meat is then rolled and pressed and eaten cold.[4] In Northeastern China, a jellied pork skin dish is often made and served with a spicy soy sauce and vinegar mixture with crushed garlic and red chili powder.[5]
Korea
In Korean cuisine, a similar dish is referred to as pyeonyuk (편육) made by pressing meat, usually from the head of the pig. It is eaten as anju (dishes associated with alcoholic beverages) or used for janchi (잔치, literally feast or banquet).
Vietnam
In Vietnam around Tết, giò thủ is made in celebration for the New Year. (not true. In fact, it is served uear round, mainly at parties or with bread) It is a traditional snack made of fresh bacon, pig’s ears, garlic, scallions, onions, black fungus, fish sauce and cracked black pepper. Traditionally, giò thủ (pork head meat pie) is wrapped in banana leaves and compressed in a wooden mold until the gelatin in the pig’s ears causes it to stick together.

In Australia, it is known as brawn or Presswurst. It is usually seen as something of an old-fashioned dish, although various large firms, such as Don and KR Castlemaine produce it.

Souse is pickled meat and trimmings usually made from pig's feet, chicken feet or cow's tongue to name a few.[6] The cooked meat or trimmings are cut into bite sized pieces and soaked in a brine made of water, lime juice, cucumbers, hot pepper, salt and specially prepared seasonings. It is usually eaten on Saturday mornings especially in St. Vincent and Barbados. In Trinidad and Tobago it is served or sold at most social gatherings such as parties, all inclusive fetes and sporting competitions. Many Caribbean countries have the same or similar version of the dish.

Head cheese or headcheese
Pennsylvania, United States
In the Pennsylvania Dutch dialect, head cheese is called souse. Pennsylvania Germans usually prepare it from the meat of pig's feet or tongue and it is pickled with sausage.
Louisiana, United States
The highly seasoned hog's head cheese is very popular as a cold cut or appetizer, especially with the Cajun people. A pig's foot provides the gelatin that sets the cheese, and vinegar is typically added to give a sour taste. Due to the French heritage of the state, this European-descended delight is widely eaten by many Louisianans. It is a popular Cajun food, and may also be known as souse meat or simply souse.
Newfoundland and Labrador, Canada
Throughout Newfoundland, brawn is typically made from wild game such as moose and caribou.
Ontario, Canada
Highly commercial and very processed versions made with pork are sold in the deli section in some grocery stores in Ontario, probably the rest of Canada too.
Quebec, Canada
Called tête fromagée, it is commonly available in grocery stores and butcher shops along with cretons and terrines.