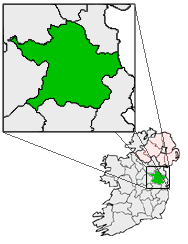 Kiltale is a small rural parish in , Ireland with a population of approx. 300. Kiltale is situated on the R154 , the main to Trim road. It is approximately 9km east of Trim, about 9km west of and 19km south of . Kiltale is just over 7km from the historical seat of the at the .

Kiltale Hurling & Club is by far the largest sporting organisation in Kiltale. The team's grounds are located on the main Trim - road, the .The Senior team won their first in 24 years when they defeated their bitter rivals Kilmessan on 28th October 2007. [ [http://www.meathchronicle.ie/story.asp?stID=1079&cid=127&cid2=] ]

Kiltale has a Church and a National School. There is also a small Parish Hall which is used for hosting events such as the annual Wheel of Fortune. There is a Public Bar in the Hurling Team's Clubhouse, which frequently hosts live music.

Public transport to/from Kiltale consists of the 111/112 service Which serves --Trim-Kiltale--- with approx. 10 services each way per day.And the 134 service which serves Dorey's Forge-Batterjohn-Dunsany--Kilcarn- Shopping Centre and runs once each way every Thursday.