Deakin (postcode: 2600) is a suburb of Canberra, Australian Capital Territory, Australia. Deakin is named after Alfred Deakin, second prime minister of Australia. Streets in Deakin are named after Governors, Governors-General and diplomats.[2]

The official residence of the Prime Minister, The Lodge is located in Deakin.

A local shopping centre is located on Hopetoun Circuit and contains an IGA supermarket, service station, newsagent, chemist, and restaurants. The Deakin Health Spa, adjacent to the shops, has recently been taken over and rebadged as the local Fitness First facility. The Embassy Hotel/Motel was also adjacent to the shops, but has since been demolished. 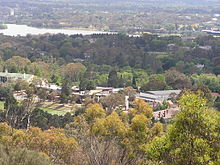 Deakin contains the embassies of Afghanistan, Bosnia, Hungary and Italy and the high commissions of Brunei, Cyprus, Fiji, Mauritius and Solomon Islands.

Located on Adelaide Avenue the Lodge is the official residence of the Prime Minister of Australia.

Officially opened by the Duke of Edinburgh on 22 February 1965, the Royal Australian Mint was commissioned to produce Australia's decimal coinage, which came into effect on 14 February 1966.

The Deakin Fault does not actually pass through Deakin. The Deakin Fault is a major fault in Canberra running North-west to south-east passing through state circle very close to Deakin. It extends from the hills to the east of Jerrabomberra via Narrabundah, Griffith, Forest, Yarralumla, then across the Molonglo River to Cook, then turns north east in Macquarie where it turns around to the north west again via Belconnen, Evatt, Melba, Flynn, Charnwood, Dunlop and out the north west of the ACT. It continues to the east end of Lake Burrunjuck near Yass. The block on the north east side was elevated and the south west side lowered.

The Deakin Anticline is a geological monument located between the Deakin Oval and the Grange Retirement Village. It is in the Yarralumla Formation in Tuffacious sandstone and siltstone. Access is from Hannah Place.