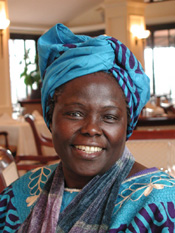 Dr. Wangari Muta Maathai (born , in village, Tetu division, of ) is an environmental and political . In 2004 she became the first n woman to receive the for “her contribution to , democracy and peace.” Dr. Maathai is also an elected member of Parliament and served as Assistant Minister for Environment and Natural Resources in the government of President between January 2003 and November 2005. She is of ethnicity.

After finishing school in Kenya, Maathai studied Biology in the and . She received her Bachelor's degree in from Mount St. Scholastica College (now ) in 1964, and her Master's degree from the , before returning to . There, at the , she earned the first Ph.D. awarded to an Eastern African woman (in ). In 1971, she became of at the University of Nairobi, and then later dean of her faculty. In 2002 Maathai accepted a position as Visiting Fellow at 's .

In 1977, Maathai founded the , a grassroots environmental , which has now planted over 40 million trees across Kenya to prevent . She has come to be affectionately called "Tree Woman" or "The Tree Mother of Africa." Since then, she has been increasingly active on both environmental and women's issues.

Maathai was also the former chairperson of (the National Council of Women of Kenya). In the 1980s her husband Mwangi Mathai, a politician whom she had married in 1969, divorced her, saying she was too strong-minded for a woman and that he was unable to control her. The judge in the divorce case agreed with the husband, and Wangari was put in jail for speaking out against the judge, who then decreed that she must drop her husband's surname. In defiance, Wangari chose to add an extra "a" instead. ["Conservation and Feminism: Africa's Greenheart." "The Economist", 21 Sep 2006.]

During the regime of President , she was imprisoned several times and violently attacked for demanding multi-party elections and an end to and tribal politics. In 1989 Maathai almost single-handedly saved Nairobi's by stopping the construction by Moi's business associates of the 60-story Kenya Times Media Trust business complex.

In 1997, in Kenya's second multi-party elections marred by ethnic violence, she ran for the country's presidency, but her party withdrew her candidacy. Nevertheless, she was a minor candidate among several contenders.

In 2002 Maathai was elected to parliament when the , which she represented, defeated the ruling party . She has been Assistant Minister in the Ministry of Environment, Natural Resources and Wildlife since 2003. She founded the in 2003.

On , she was elected as the first president of the 's .

In 2006 she was one of the eight flag bearers at the 2006 Winter Olympics Opening Ceremony. Also on , 2006 she was awarded an honorary doctorate by and gave the commencement address at . She supported the International Year of Deserts and Desertification programme. In November 2006, she spearheaded the .

In January 2007 Maathai hosted the conference in Nairobi, where more than 120 young delegates of environmental, civil rights, peace and social justice youth movements as well as youth organisations of green parties from all over the world are expected to come.

On January 28, 2007, Maathai returned to Benedictine College for the first time in over 15 years and spoke to the students at her alma mater.

She also endorsed the , calling for new market-based mechanisms to protect forests.

Maathai was defeated in Party of National Unity's primary elections for its parliamentary candidates in November 2007 and chose to instead run as the candidate of a smaller party. [ [http://www.news24.com/News24/Africa/News/0%2C%2C2-11-1447_2223090%2C00.html "Upset in Kenyan primaries"] , Sapa (News24.com), November 18, 2007.] She was, however, defeated in the December 2007 parliamentary election, and she subsequently called for a recount of votes in the presidential election (officially won by Kibaki, but disputed by the opposition) in her constituency, saying that both sides should feel the outcome was fair and that there were indications of fraud. [ [http://www.afriquenligne.fr/news/daily-news/opposition-claims-polls-fraud-discovered-in-48-elective-zones-2007123014189/ "Opposition claims polls fraud discovered in 48 elective zones"] , Panapress (afriquenligne.fr), December 30, 2007.]

In 2008, she will co-host the Nairobi conference, which is expected to draw over 1,000 Greens from dozens of Green Parties around the planet.

Her autobiography, "Unbowed: One Woman’s Story", was released in September 30, 2006.

"Maathai stood up courageously against the former oppressive regime in ," the said in a statement announcing her as the 2004 winner. "Her unique forms of action have contributed to drawing attention to political oppression—nationally and internationally. She has served as inspiration for many in the fight for democratic rights and has especially encouraged women to better their situation." In short, her main contribution to peace was planting hundreds of trees throughout the country in an effort to deter warfare.

In a 2004 interview with , [http://www.time.com/time/magazine/article/0,9171,713166,00.html] in response to the question, "You've said that AIDS is a biological weapon manufactured by the developing world to wipe out black people. Do you still believe that?" Maathai replied, "I have no idea who created AIDS and whether it is a biological agent or not. But I do know things like that don't come from the moon. I have always thought that it is important to tell people the truth, but I guess there is some truth that must not be too exposed," and when asked what she meant, she continued, "I'm referring to AIDS. I am sure people know where it came from. And I'm quite sure it did not come from the monkeys." [ [http://www.time.com/time/magazine/article/0,9171,901041018-713166,00.html 10 Questions: Wangari Maathai - TIME ] ]

In response she issued the following statement: