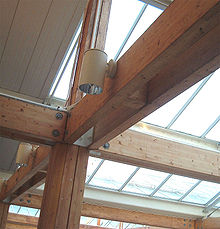 Glulam frame for the roof of a building.

Glued laminated timber, also called Glulam, is a type of structural timber product composed of several layers of dimensioned timber bonded together with durable, moisture-resistant adhesives. This material is called 'laminating stock' or lamstock for short.

By laminating several smaller pieces of timber, a single large, strong, structural member is manufactured from smaller pieces. These structural members are used as vertical columns or horizontal beams, as well as curved, arched shapes. In fact, glulam is the only engineered wood product that can be produced in curved shapes, offering unlimited design flexibility. It is available in a range of appearance characteristics to meet end-use requirements. [1] Connections are usually made with bolts or plain steel dowels and steel plates.

Glulam optimizes the structural values of a renewable resource - wood. Because of their composition, large glulam members can be manufactured from a variety of smaller trees harvested from second- and third-growth forests and plantations. Glulam provides the strength and versatility of large wood members without relying on the old growth-dependent solid-sawn timbers. [2] It reduces the overall amount of wood used when compared to solid sawn timbers by diminishing the negative impact of knots and other small defects in each component board.

Glulam has much lower embodied energy than reinforced concrete and steel, although of course it does entail more embodied energy than solid timber. However the laminating process allows timber, to be used for much longer spans, heavier loads and complex shapes. Glulam is two-thirds the weight of steel and one sixth the weight of concrete – the embodied energy to produce it is six times less than the same suitable strength of steel. [3] Glulam can be manufactured to a variety of straight and curved configurations so it offers architects artistic freedom without sacrificing structural requirements. [4] Wood has a greater tensile strength relative to steel – two times on a strength-to-weight basis – and has a greater compressive resistance strength than concrete. [5] The high strength and stiffness of laminated timbers enable glulam beams and arches to span large distances without intermediate columns, allowing more design flexibility than with traditional timber construction. The size is limited only by transportation and handling constraints. [6] 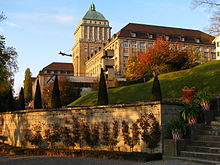 Glulam dome roofing the tower of the University of Zurich, built using the Hetzer system in 1911.

One of the earliest still-standing glulam roof structures is generally acknowledged [8] to be the assembly room of King Edward College, a school in Southampton, England, dating from 1870. Two churches near Liverpool, England are now thought to have the earliest extant uses: St Luke, Formby dates from 1855, and Holy Trinity, Parr Mount, St Helens from 1857. Other examples of 19th-century British glulam have also been identified. The first industrial patented use was in Weimar, Germany. Here in 1872 [8] Otto Hetzer set up a steam sawmill and carpentry business in Kohlstrasse. Beginning in 1892, he took out a series of patents. DRP No. 63018 was for a ventilated timber floor deck that could be tightened laterally after installation, to compensate for shrinkage. Hetzer continued to patent various ingenious systems, but the first of these that could be compared with subsequently standardised horizontal glulam was DRP No. 197773, dated 1906. This entailed vertical columns which transitioned into curved glued laminated eaves zones, and then became sloped rafters, all in a single laminated unit. Each component, bonded under pressure, comprised three or more horizontally arranged laminations. In other words, the glulam portal frame was born. In 1895, Hetzer moved his company to Ettersburger Strasse, still in Weimar. At the height of production, in around 1917, he employed about 300 workers, and Müller includes a fine engraving of the railway sidings and works in 1921.

In 1909, the Swiss engineering consultants Terner & Chopard [8] purchased permission to use Hetzer's patent, and employed glulam in a number of projects. These included the former Hygiene Institute, Zurich, 1911, now the main building of the university, where the bell-shaped roof dome is still to be seen.

The technology arrived in North America in 1934 when Max Hanisch, Sr., who had worked with Hetzer at the turn of the century, formed a firm in Peshtigo, Wisconsin to manufacture structural glued laminated timber. One of the first glulam structures erected in the United States was a research laboratory at the USDA Forest Products Laboratory in Madison, Wisconsin. The structure was erected in 1934 and is still in service today. A significant development in the glulam industry was the introduction of fully water-resistant phenol-resorcinol adhesive in 1942. This allowed glulam to be used in exposed exterior environments without concern of gluline degradation. The first U.S. manufacturing standard for glulam was Commercial Standard CS253-63, which was published by the Department of Commerce in 1963. The most recent standard is ANSI/AITC Standard A190.1-02, which took effect in 2002. [9]

The roof of the Richmond Olympic Oval, built for speed skating events at the 2010 Winter Olympic Games in Vancouver, British Columbia, features is one of the world's largest clearspan wooden structures. The roof includes 2,400 cubic metres of Douglas-fir lamstock lumber in glulam beams. A total of 34 yellow-cedar glulam posts support the overhangs where the roof extends beyond the walls. [10]

Pressure-treated glulam timbers or timbers manufactured from naturally durable wood species are well suited for creating bridges and waterfront structures. Wood’s ability to absorb impact forces created by traffic and its natural resistance to chemicals, such as those used for de-icing roadways, make it ideal for these installations. Glulam has been successfully used for pedestrian, forest, highway, and railway bridges. An example in North America of a glulam bridge is at Keystone Wye, South Dakota, constructed in 1966 - 7.

The Kingsway Pedestrian Bridge in Burnaby, British Columbia, Canada, is constructed of cast-in-place concrete for the support piers, structural steel and glulam for the arch, a post tensioned pre-cast concrete walking deck, and stainless steel support rods connecting the arch to the walking deck.