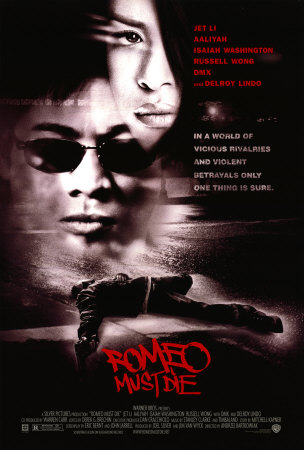 "Romeo Must Die" is a 2000 with a "" theme, directed by . It stars , , , , , , , and DMX, and features action and fight choreography by . It is considered Jet Li's breakout role in the English-speaking American film industry.

Despite the romantic main theme, in which it was originally slated to have a scene at the end where Jet Li and Aaliyah kiss, that kiss was cut in the final release. The comments by Jet Li indicate that the scene was removed because in the film a family member is murdered, and it would be inappropriate for him to be kissing a girl immediately afterwards from the rival family.

The movie's setting was supposedly set in , but other than a few establishing shots, the film was entirely shot in Vancouver, Canada.

The next morning, Po Sing's body is found dangling from a light pole, dead. The news quickly travels to Ch'u, as well as the boss of the black gang, Isaak O'Day (played by ).

The scene shifts to Hong Kong, where Po's brother, Han Sing (played by ), is currently incarcerated. Han, formerly a cop, had taken the fall for his brother and father, who have both since escaped to America. Upon hearing of his brother's death, Han breaks out of prison and heads for the US.

The character of Trish O'Day (played by in her first film role) is then introduced. Although the daughter of a notorious crime boss, Trish wants nothing to do with her father or crime, and is reluctant when Maurice (played by ), working for her father, comes to act as her bodyguard and babysitter.

Trish manages to give Maurice the slip at a music store and gets into a cab, which coincidentally Han is stealing. The two drive for Trish's house, and along the way, they become fast friends. Meanwhile, Isaak is meeting with shady businessman Vincent Roth (played by ), where it is revealed they are planning to build a football stadium.

Trish then runs into Colin O'Day (played by ), her brother, at her store. Unlike Trish, Colin is willing to follow in his father's footsteps and go into the world of business. At the same time, Han breaks into his deceased brother's apartment, reminiscing about when the pair emigrated to Hong Kong by sea as children. Using the phone's redial function, he discovers the last number Po called before he died, Trish's store.

At a diner, Trish is then accosted by Mac (played by ), Isaak's leading agent and all-around best man, who stresses the need for Trish's safety due to the rising level of gang warfare. Upon arriving home, she runs into Han, who has followed her in order to talk to her about his brother's death. Maurice and other gangsters under the employ of Isaak then arrive, who find Han, resulting in a fight where Han then steals Maurice's car and drives away.

Han then shows up at Po's funeral, where he confronts his father and demands to know the identity of his brother's killer. Afterwards, Han meets up with Kai, who explains the reason for the gang warfare - half of the precious waterfront property is owned by the Triad, the other half owned by assorted black gangsters and businessmen. Battle is erupting to determine which side will result in controlling the majority of the property.

Han meets Trish again, inquiring about Po's death, during which a humorous football sequence occurs. Later, at Colin's apartment, Colin and a friend are thrown out of a window by an unidentified assassin. Han then returns to Po's place to find it ransacked. Han then sees Trish amongst the mess, and she tells him about a childhood memory between her and Colin. Finding a list of addresses hidden in a cane in Po's car, Han and Trish decide to visit them, only to find that the Chinese owners have been killed by assassins.

After a chase sequence, Han confronts one of the assassins, only to discover she is actually Chinese. After bringing this information to his father, Ch'u dismisses it as a plot by Isaak. Another scene then follows where Mac muscles a black fisherman out of his waterfront estate. Then Kai and Chinese agents arrive at a Chinese-owned waterfront business, where the Triad agents kill the Chinese owners and take their property deeds. It is revealed that the entire conspiracy is actually a plot by Ch'u and Mac to rob all the waterfront owners of their precious property in order to sell it to Roth, who is planning to use the land to build a stadium.

Deciding to take action, Han and Trish go to Silk's club, the only place on the list of addresses that has yet to be invaded or signed over. There, they witness Mac killing Silk in order to obtain his land deeds. Han is then beaten unconscious, and when he comes to he is in a warehouse surrounded by Maurice and other gang members. In an extended fight sequence, Han manages to escape, and heads for Trish.

At Roth's estate, Ch'u signs over his ill-gotten property deeds for a vast sum of money, followed by Isaak then arriving to do the same. Isaak, however, changes his mind and decides not to sell his property to Roth, but instead go into business with Roth and become his partner in the management of the stadium. Mac, fed up, turns on Isaak, and reveals the plot and that he is, in fact, Colin's killer. Enraged, Isaak attacks Mac, resulting in a gunfight between Mac's agents and Roth's agents.

In the ensuing chaos, Roth attempts to escape with the deeds, but Mac chases him, causing most of the deeds to become lost. Han then arrives and confronts Mac on the rooftop, where Mac is shot dead by Trish. Han then leaves for Ch'u's place, intending to confront his father once and for all.

Along the way, Han gets into a fight with Kai, where he eventually kills him. Han then angrily demands of Ch'u, who reveals he had Po killed to protect his business venture. Ch'u then asks if Han plans to kill him, who replies that he has already honored his brother's memory by killing Kai, his murderer, and he plans to let fate decide what to do with Ch'u. As Han is walking away, his father commits suicide.

Han then meets up with Trish. They embrace and the two walk away together as the credits roll.