The Commodore PET (Personal Electronic Transactor) was a home/personal computer produced from 1977 by Commodore International.[1] A top-seller in the Canadian and United States educational markets, it was Commodore's first full-featured computer, and formed the basis for their entire 8-bit product line.

Origins and the early models

Design of the chiclet keyboard of the PET 2001 series

In the 1970s Commodore was one of many electronics companies selling calculators designed around Dallas-based Texas Instruments (TI) CPU chips. However, in 1975 TI increased the price of these components to the point where the chip set cost more than an entire TI calculator, and the industry that had built up around it was frozen out of the market.

Commodore responded to this by searching for a chip set they could purchase outright. They quickly found MOS Technology, who were in the process of bringing their 6502 microprocessor design to market, and with whom came Chuck Peddle's KIM-1 design, a small computer kit based on the 6502. At Commodore, Peddle convinced Jack Tramiel that calculators were a dead-end. In September 1976 Peddle got a demonstration of Jobs and Wozniak's Apple II prototype, when Jobs was offering to sell it to Commodore, but Commodore considered Job's offer too expensive.[2] Tramiel demanded that Peddle, Bill Seiler, and John Feagans create a computer in time for the June 1977 Consumer Electronics Show, and gave them six months to do it.[3] Tramiel's son, Leonard, helped design the PETSCII graphic characters and acted as quality control. The result was the first all-in-one home computer, the PET, the first model of which was the PET 2001. Its 6502 processor controlled the screen, keyboard, cassette tape recorders and any peripherals connected to one of the computer's several expansion ports.[4] The PET 2001 included either 4 KB (2001-4) or 8 KB (2001-8) of 8-bit RAM, and was essentially a single-board computer with discrete logic, driving a small built-in monochrome monitor with 40×25 character graphics. Designed on an appliance computer philosophy similar to the original Macintosh [5] the machine also included a built-in Datassette for data storage located on the front of the case, which left little room for the keyboard. The data transfer rate to cassette tape was 1500 baud, duplicated for safety, giving an effective rate of 750 baud.[citation needed] The computer's main board carried four expansion ports: extra memory, a second cassette tape recorder interface, a parallel port and an IEEE-488 port.[6]

The PET 2001 was announced at the Winter CES[7] in January 1977 and the first 100 units were shipped later that year in October.[8] However, the PET was back-ordered for months and to ease deliveries, early in 1978 Commodore decided to cancel the 4 kB version.[citation needed]

Although the machine was fairly successful, there were frequent complaints about the tiny calculator-like keyboard, often referred to as a "chiclet keyboard" because the keys resembled the gum candy. This was addressed in upgraded "dash N" and "dash B" versions of the 2001, which put the cassette tape recorder outside the case, and included a much larger keyboard with a full stroke motion. Internally a newer motherboard was used, along with an upgrade from static RAM to dynamic RAM[citation needed] and 8, 16, or 32 KB, known as the 2001-N-8, 2001-N-16 or 2001-N-32, respectively.

Sales of the newer machines were strong, and Commodore then introduced the models to Europe. The result was the CBM 3000 series ('CBM' standing for Commodore Business Machines), which included the 3008, 3016 and 3032 models. Like the 2001-N-8, the 3008 was quickly dropped. 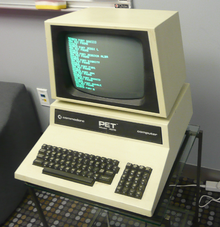 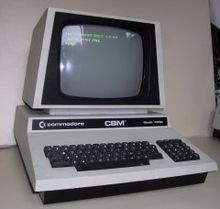 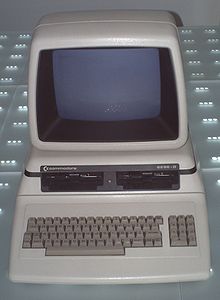 The final version of what could be thought of as the "classic" PET was the PET 4000 series. This was essentially the later model 2000 series, but with a larger black-and-green monitor and a newer version of Commodore's BASIC programming language. By this point Commodore had noticed that many customers were buying the "low memory" versions of the machines and installing their own RAM chips. The 4008 and 4016 had the sockets punched out of the motherboard to prevent this practice.[citation needed] The 4032 was a huge success in schools, where its tough all-metal construction and all-in-one design made it better able to stand up to the rigors of classroom use.[9] Just as important in this role was the PET's otherwise underutilized IEEE 488 port. Used wisely, the port could be used as a simple local area network and allowed printers and disk drives (which were then very expensive) to be shared among all of the machines in the classroom.[citation needed]

A machine code monitor was introduced which allowed the user to inspect, write and execute code for the 6502. It did not feature an assembler, so the user was left to do this by hand and enter hexadecimal code directly. The PET lacked a reset key, however, so turning off the power was the only option if a machine-code program got stuck in a loop. Since these computers did not multitask, the only data loss would be to the program in memory.

Two more machines were released in the PET series. The CBM 8000 included a new display chip which drove an 80×25 character screen, but this resulted in a number of software incompatibilities with programs designed for the 40 column screen, and it appears to have been unpopular as a result. The machine shipped with 32 kB standard as the 8032, but allowed another 64 kB to be added externally. Later the upgrade was installed from the factory, creating the 8096.[citation needed]

The last in the series was the SP9000, known as the SuperPET or MicroMainframe. This machine was designed at the University of Waterloo for teaching programming. In addition to the basic CBM 8000 hardware, the 9000 added a second CPU in the form of the Motorola 6809, more RAM and included a number of programming languages including BASIC in ROM for the 6502 and APL, COBOL, FORTRAN, Pascal and a 6809 assembler on floppies for the 6809. It also included a terminal program which allowed the machine to be used as a "smart terminal" as well, so this single machine could replace many of the boxes currently in use at the university. Additionally this machine became a remote development environment where the user could later upload their creation to a mainframe after completing development and testing on the SuperPET.[citation needed]

Commodore tried to update the PET line with a new redesign called the CBM-II series (also known as the B series). These were not as successful and were ultimately abandoned. However, due to demand, the original PET machines were revived and the CBM-II case style was retained. These were known as the SK's (due to the separated keyboard). They also had a swivel monitor. Originally, standard 8032 boards were retrofitted into these cases. Later the SK models got a new mainboard that already included the 64 kB extension directly on the board and were sold as 8296 or, with a built-in 8250 dual disk drive, as 8296-D.

Although not officially a member of the PET series, in 1983 Commodore packaged C64 motherboards in plastic cases similar to the PET 4000-series in order to create the Educator 64. This was an attempt to retake some of the education market they had largely lost by then to the Apple IIe.

In the home computer market the PET line was soon outsold by machines that supported high-resolution color graphics and sound, mainly the Apple II (introduced a few months after the PET 2001 in 1977), Atari 400/800 (1979), and, in particular, Commodore's own bestselling VIC-20 (1980/81). Commodore released a High Resolution Graphic board for the PET using the Thomson EF936x with a resolution of 512x512 pixels.[10]

Without the board, the PET's graphics capabilities were limited to a character set hardwired in ROM. On many of the PET range's home computer rivals, the look-up address of the character graphics could be changed and pointed to RAM, where new characters could be drawn by a programmer to create custom graphics shapes. From a programming point of view, this was a relatively simple method of producing good-looking graphics images. BASIC programs often could not achieve acceptable speed animating bitmap graphics, but since this technique only involved moving character objects on the screen, many programs were made this way even on bitmap-capable machines. Still, the PET's lack of the character set remapping feature must therefore be said to constitute a major weakness in the machine's design.

Somewhat offsetting this drawback, the PET's ROM-restricted character set—an ASCII-1963 deviation known as PETSCII—was one of the most varied and flexible of the era, allowing PET games with rudimentary graphics to be created, exemplified by clones of video games such as Space Invaders. This flexibility was achieved by the use of two switchable character sets, allowing the choice of either mixed-case characters, or uppercase with graphics; either could also be displayed as a reverse field, negative image. Also, this was an era in which many popular text adventure games did not need graphics at all. For specialized applications, alternative character sets could be programmed into an EPROM inserted in the character set ROM socket. Alternative character set EPROMs with diacritics and mathematical symbols were available in the aftermarket. 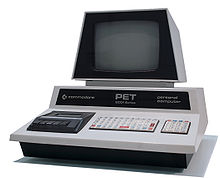 Commodore Business Machines made a variety of disk drives available for the PET, using the IEEE 488 interface, including: