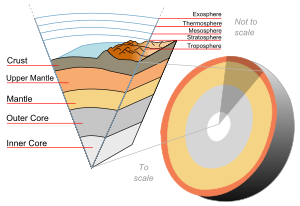 Earth cutaway from core to exosphere.

The term China syndrome (loss-of-coolant accident) describes a nuclear reactor operations accident characterized by the severe meltdown of the core components of the reactor, which then burn through the containment vessel and the housing building, then notionally through the crust and body of the Earth until reaching China.[1][2] 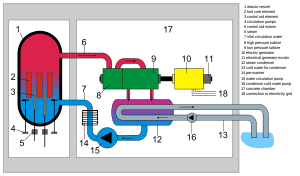 The China syndrome is a catastrophic accident, which is a possible result of the meltdown of a nuclear reactor, which begins with the loss of coolant fluid in the reactor vessel, and the partial or complete exposure of the fuel element assemblies. Despite the nuclear chain reaction having been stopped with control rods, or other means, the fuel element assemblies continue radiating much residual, decay heat for days, because of the further decay of the fission products produced. If not properly cooled, the fuel rod assemblies might overheat, soften, and melt, falling to the bottom of the reactor vessel, where, without neutron-absorbing control rods to moderate the chain reaction, nuclear fission might resume. Hence, the temperature of the molten fuel rod assemblies would rise to a temperature that would burn through the containment vessels and housing buildings until reaching the atmosphere and the environment.[3][4]

The system design of the nuclear power plants built in the late 1960s raised questions of operational safety, and raised the concern that a severe reactor accident could release large quantities of radioactive materials into the atmosphere and environment. By 1970, there were doubts about the ability of the emergency cooling systems of a nuclear reactor to prevent a loss of coolant accident and the consequent meltdown of the fuel core; the subject proved popular in the technical and the popular presses.[5] In 1971, in the article Thoughts on Nuclear Plumbing, former Manhattan Project (1942–1946) nuclear physicist Ralph Lapp used the term "China syndrome" to describe a possible burn-through, after a loss of coolant accident, of the nuclear fuel rods and core components melting the containment structures, and the subsequent escape of radioactive material(s) into the atmosphere and environment; the hypothesis derived from a 1967 report by a group of nuclear physicists, headed by W. K. Ergen.[6] In the event, Lapp’s hypothetical nuclear accident was cinematically adapted as The China Syndrome (1979).

The geographic, planet-piercing concept of the China syndrome derives from the misperception that China is the antipode of the United States; to many Americans, it is the “the other side of the world”.[7] The idea that the molten fuel would melt the earth's crust, let alone reach China, is obviously nonsense, intended as a joke.[8][2]

Unit #2 at the Fukushima Daiichi nuclear power plant suffered serious damage during the disaster in 2011. The containment and pressure vessels of unit #2 were compromised and most of the cooling water pumped into unit #2 quickly leaked out. TEPCO eventually announced that unit #2 had experienced a fuel meltdown and melt-through. On September 20, 2011, Hiroaki Koide, assistant professor at Kyoto University's Research Reactor Institute, estimated that material from the nuclear fuel rods may be 12 meters deep underground at reactors 1-3.[citation needed]