Dagger
This article is about the weapon. For other uses, see Dagger (disambiguation).

A dagger is a fighting knife with a sharp point designed or capable of being used as a thrusting or stabbing weapon.[1][2] The design dates to human prehistory, and daggers have been used throughout human experience to the modern day in close combat confrontations.[3] Many ancient cultures used adorned daggers in ritual and ceremonial purposes, a trend which continues to the present time in the form of art knives. The distinctive shape and historic usage of the dagger have made it iconic and symbolic.

Over the years, the term 'dagger' has been used to describe a wide variety of thrusting knives, including knives that feature only a single cutting edge, such as the European rondel dagger or the Persian pesh-kabz, or, in some instances, no cutting edge at all, such as the stiletto of the Renaissance. However, a true dagger consists of a double-edged fighting knife with a sharp point and central spine or fuller, with two cutting edges sharpened for the full length of the blade, or nearly so.[4] Most daggers also feature a full crossguard to keep the hand from riding forwards onto the sharpened blade edges. Designed from the outset as a fighting knife and close combat weapon, and equipped with its distinctive full-length twin cutting edges, the true dagger is easily distinguished from fighting knives that incorporate a single full-length sharpened edge. Another distinctive feature of the true dagger is that it is designed to position the blade horizontally when using a conventional palm grip, enabling the user to slash right or left as well as thrust the blade between an opponent's ribs.[4] The twin full-length edges enable the user to make broad slashes (cuts) using either a forehand or backhand arm movement, while the sharp, acutely-pointed tip makes the knife an effective thrusting or stabbing weapon.[4][5] This versatility distinguishes the true dagger from more specialized thrusting knives such as the stiletto.[6][5]

A Neolithic dagger from the Museum of Toulouse.

Much like battle axes, daggers evolved out of prehistoric tools. In Neolithic times, daggers were made of materials such as flint, ivory or bone and were used as weapons since the earliest periods of human civilization. The earliest metal daggers are of Beaker copper and appear in the early Bronze Age, in the 3rd millennium BC, predating the Bronze Age sword.[7]

From pre-dynastic Egypt,[8] daggers were adorned as ceremonial objects with golden hilts and later even more ornate and varied construction. One early silver dagger was recovered with midrib design. Traditionally, some military and naval officers wore dress daggers as symbols of power, and modern soldiers are still equipped with combat knives and knife bayonets. Copper daggers of Early Minoan III were recovered at Knossos.[9]

In ancient Egypt, daggers were usually made of copper or bronze, while royalty had gold weapons. The 1924 opening of the tomb of Tutankhamun revealed two daggers, one with a gold blade, and one of smelted iron. Iron ore was not found in Egypt, making the iron dagger rare, and the context suggests that the iron dagger was valued on a level equal to that of its ceremonial gold counterpart.[10]

One of the earliest objects made of smelted iron dates is a dagger dating to before 2000 BC, found in a context that suggests it was treated as an ornamental object of great value. Found in a Hattic royal tomb dated about 2500 BC, at Alaca Höyük in northern Anatolia, the dagger has a smelted iron blade and a bronze handle.[11]

The artisans and blacksmiths of Iberia in what is now southern Spain and southwestern France produced various iron daggers and swords of high quality from the 5th to the 3rd century BC, in ornamentation and patterns influenced by Greek, Punic (Carthaginian), and Phoenician culture.[12][13] The exceptional purity of Iberian iron and the sophisticated method of forging, which included cold hammering, produced double-edged weapons of excellent quality.[12] One can find technologically advanced designs such as folding knives rusted among the artifacts of many Second Iberian Iron Age cremation burials or in Roman Empire excavations all around Spain and the Mediterranean.[14] Iberian infantrymen carried several types of iron daggers, most of them based on shortened versions of double-edged swords, but the true Iberian dagger had a triangular-shaped blade. Iberian daggers and swords were later adopted by Hannibal and his Carthaginian armies.[12] The Lusitanii, a pre-Celtic people dominating the lands northwest of Iberia, successfully held off the Roman Empire for many years with a variety of innovative tactics and light weapons, including iron-bladed short spears and daggers modeled after Iberian patterns.

During the Roman Empire, legionaries were issued a pugio (from the Latin pugnō, or “fight”), a double-edged iron thrusting dagger with a blade of 7-12 inches. The design and fabrication of the pugio was taken directly from Iberian daggers and short swords; the Romans even adopted the triangular-bladed Iberian dagger, which they called the parazonium.[12]

The term dagger appears only in the Late Middle Ages, reflecting the fact that while the dagger had been known in antiquity, it had disappeared during the Early Middle Ages, replaced by the hewing knife or seax.[15][16] It re-appeared in the 12th century as the "knightly dagger" and was developed into a common arm and tool for civilian use by the late medieval period.[17] The earliest known depiction of such a knightly dagger is the so-called "Guido relief" inside the Grossmünster of Zürich (ca. 1120).[18] A number of depictions of the fully developed knightly dagger are found in the Morgan Bible (ca. 1240). The Old French term dague appears to have referred to these weapons in the 13th century, alongside other terms such as poignal and basilard. The Middle English dagger is used from the 1380s.

During this time, the dagger was often employed in the role of a secondary defense weapon in close combat. The knightly dagger evolved into the larger baselard knife in the 14th century. The baselard was considered an intermediate between a short sword and a long dagger, and became popular also as a civilian weapon. Sloane MS. 2593 (ca. 1400) records a song satirizing the use of oversized baselard knives as fashion accessoires.[19]

Depiction of combat with the dagger (degen) in Hans Talhoffer (1467)

In the Late Middle Ages, knives with blade designs that emphasized thrusting attacks, such as the stiletto, became increasingly popular, and some thrusting knives commonly referred to as 'daggers' ceased to have a cutting edge. This was probably due to the custom of fighting in plate armour, where cutting attacks were ineffective and focus was laid instead on thrusts with narrow blades aimed at armour plate intersections (or the eye slits of the helmet visor). These late medieval thrusting weapons are sometimes classed by the shape of their hilt as either roundel, bollock or ear daggers. The term dagger is coined in this time, as are the Early Modern German equivalents dolch (tolch) and degen (tegen). In the German school of fencing, Johannes Liechtenauer (Ms. 3227a) and his successors (specifically Andres Lignizer in Cod. 44 A 8)) taught fighting with the dagger.[20]

These techniques in some respects resemble modern knife fighting, but emphasized thrusting strokes almost exclusively, instead of slashes and cuts. When used offensively, a standard attack frequently employed the reverse or icepick grip, stabbing downward with the blade to increase thrust and penetrative force. This was done primarily because the blade point frequently had to penetrate or push apart an opponent's steel chain mail or plate armor in order to inflict an injury. The disadvantage of employing the medieval dagger in this manner was that it could easily be blocked by a variety of techniques, most notably by a block with the weaponless arm while simultaneously attacking with a weapon held in the right hand. Another disadvantage was the reduction in effective blade reach to the opponent when using a reverse grip. As the wearing of armor fell out of favor, dagger fighting techniques began to evolve which emphasized the use of the dagger with a conventional or forward grip, while the reverse or icepick grip was retained when attacking an unsuspecting opponent from behind, such as an assassination.

The dagger was very popular as a fencing and personal defense weapon in 17th and 18th century Spain, where it was referred to as the daga or puñal.[21] During the Renaissance Age the dagger was used as part of everyday dress, and daggers were the only weapon commoners were allowed to carry on their person.[22] In English, the terms poniard and dirk are loaned during the late 16th to early 17th century, the latter in the spelling dork, durk (presumably via Low German, Dutch or Scandinavian dolk, dolch, ultimately from a West Slavic tulich), the modern spelling dirk dating to 18th-century Scots.

Beginning with the 17th century, another form of dagger—the plug bayonet and later the socket bayonet—was used to convert muskets and other longarms into spears by mounting them on the barrel. 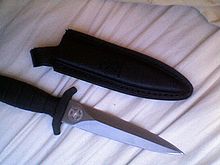 A modern Winchester dagger or boot knife, with sheath.

Daggers achieved public notoriety in the 20th century as ornamental uniform regalia during the Fascist dictatorships of Mussolini's Italy and Hitler's Germany. The resurgence of these dress daggers and accoutrements in post-World War I Germany gave a much needed boost to the flagging fortunes of the metalworking center Solingen. Dress daggers were used by several other countries as well, including Japan but never to the same extent as those worn by the Military and Political bodies of the Third Reich or Fascist Italy. As combat equipment they were carried by many infantry and commando forces during the Second World War. British Commando and other elite units were issued an especially slender dagger, the Fairbairn-Sykes Fighting Knife, developed by William E. Fairbairn and Eric A. Sykes from real-life close-combat experiences gained while serving on the Shanghai Municipal Police Force.[23][24] The F-S dagger proved very popular with the commandos, who used it primarily for sentry elimination. Some units of the U.S. Marine Corps Raiders in the Pacific were issued a similar fighting dagger, the Marine Raider Stiletto.[25], though the design proved less than successful when used in the type of knife combat encountered in the Pacific theater.[26][27]

Aside from military forces, most daggers are no longer carried openly, but concealed in clothing. One of the more popular forms of the concealable dagger is the boot knife. The boot knife is nothing more than a shortened dagger that is compact enough to be worn on the lower leg, usually by means of a sheath clipped or strapped to a boot or other footwear.[28]

The dagger is symbolically ambiguous. It may be associated with deception, stealth, and/or treachery due to the ease of concealment and surprise that someone could inflict with one on an unsuspecting victim, and indeed many assassinations have been carried out with the use of a dagger, including that of Julius Caesar.[29] A cloak and dagger attack is one in which a deceitful, traitorous, or concealed enemy attacks a person.[30] On the other hand, for some cultures and military organizations the dagger symbolizes courage and daring in combat.[31]

Daggers are a popular form of what is known as the "Art Knife". One of the most famous examples is Knifemaker Buster Warenski's replication of the gold dagger found in King Tut's tomb. Warenski's dagger was made with a cast gold blade and the knife contained 32 ounces of pure gold in its construction.[32] One of the knives required of an American Bladesmith Society Mastersmith is the construction of an "Art Knife" or a "European style" dagger.[33]