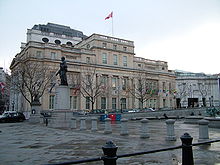 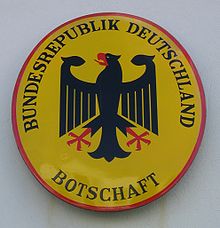 Seal on the building of German Embassies.
Text: "Federal Republic of Germany - Embassy"

A diplomatic mission is a group of people from one state or an international inter-governmental organisation (such as the United Nations) present in another state to represent the sending state/organisation in the receiving state. In practice, a diplomatic mission usually denotes the permanent mission, namely the office of a country's diplomatic representatives in the capital city of another country. As well as being a diplomatic mission to the country in which it is situated, it may also be a non-resident permanent mission to one or more other countries. There are thus resident and non-resident embassies.[1][2][3][4]

A permanent diplomatic mission is typically known as an embassy, and the person in charge of the mission is known as an ambassador. The term "embassy" is often used to refer to the building or compound housing an ambassador's offices and staff. Technically, however, "embassy" refers to the diplomatic delegation itself, while the office building in which they work is known as a chancery.

All missions to the United Nations are known simply as permanent missions, while EU Member States' missions to the European Union are known as permanent representations and the head of such a mission is typically both a permanent representative and an ambassador. European Union missions abroad are known as EU delegations. Some countries have more particular naming for their missions and staff: a Vatican mission is headed by a nuncio (Latin "envoy") and consequently known as an apostolic nunciature. Under the rule of Maumar al-Gadaffi Libya's missions used the name people's bureau and the head of the mission was a secretary. Missions between Commonwealth countries are known as high commissions and their heads are high commissioners. This is because ambassadors are exchanged between foreign countries, but since the beginning of the Commonwealth, member countries have nominally maintained that they are not foreign to one another (the same reason as the naming of the Foreign and Commonwealth Office).

In the past a diplomatic mission headed by a lower-ranking official (an envoy or minister resident) was known as a legation. Since the ranks of envoy and minister resident are effectively obsolete, the designation of legation is no longer used today. (See diplomatic rank.)

A consulate is similar to (but not the same as) a diplomatic office, but with focus on dealing with individual persons and businesses, as defined by the Vienna Convention on Consular Relations. A consulate or consulate general is generally a representative of the embassy in locales outside of the capital city. For instance, the United Kingdom has its Embassy of the United Kingdom in Washington, D.C., but also maintains seven consulates-general and four consulates elsewhere in the US. The person in charge of a consulate or consulate-general is known as a consul or consul-general, respectively. Similar services may also be provided at the embassy (to serve the region of the capital) in what is sometimes called a consular section.

In cases of dispute, it is common for a country to recall its head of mission as a sign of its displeasure. This is less drastic than cutting diplomatic relations completely, and the mission will still continue operating more or less normally, but it will now be headed by a chargé d'affaires (usually the deputy chief of mission) who may have limited powers. (A chargé d'affaires ad interim also heads the mission during the interim between the end of one chief of mission's term and the beginning of another). 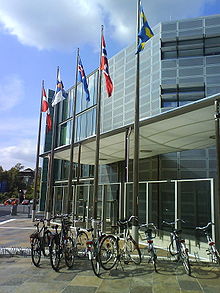 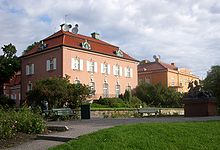 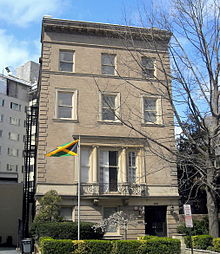 Embassy of Jamaica in Washington, D.C.

The US Chancery in Manila, Philippines.

Contrary to popular belief, diplomatic missions do not enjoy full extraterritorial status and are not sovereign territory of the represented state.[5][6] Rather, the premises of diplomatic missions remain under the jurisdiction of the host state while being afforded special privileges (such as immunity from most local laws) by the Vienna Convention on Diplomatic Relations. Diplomats themselves still retain full diplomatic immunity, and (as an adherent to the Vienna Convention) the host country may not enter the premises of the mission without permission of the represented country. The term "extraterritoriality," therefore, is often used in this broader sense when applied to diplomatic missions.

As the host country may not enter the representing country's embassy without permission, embassies are sometimes used by refugees escaping from either the host country or a third country. For example, North Korean nationals, who would be arrested and deported from China upon discovery, have sought sanctuary at various third-country embassies in China. Once inside the embassy, diplomatic channels can be used to solve the issue and send the refugees to another country. Notable violations of embassy extraterritoriality include the Iran hostage crisis (1979–1981) and the Japanese embassy hostage crisis at the ambassador's residence in Lima, Peru during 1996.

Between members of the Commonwealth of Nations their diplomatic missions are not called embassies, but High Commissions, as Commonwealth nations share a special diplomatic relationship. It is generally expected that an embassy of a Commonwealth country in a non-Commonwealth country will do its best to provide diplomatic services to citizens from other Commonwealth countries if the citizen's country does not have an embassy in that country. Canadian and Australian nationals enjoy even greater cooperation between their respective consular services, as outlined in Canada-Australia Consular Services Sharing Agreement. The same kind of procedure is also followed multilaterally by the member states of the European Union (EU). European citizens in need of consular help in a country without diplomatic or consular representation of their own country may turn to any consular or diplomatic mission of another EU member state.

The rights and immunities (such as diplomatic immunity) of diplomatic missions are codified in the Vienna Convention on Diplomatic Relations.

Multiple missions in a city

Some cities may host more than one mission from the same country. An example is Rome, where many states maintain missions to Italy and another to the Holy See. It is not customary for these missions to share premises nor diplomatic personnel. At present, only the Iraqi missions to Italy and the Holy See share premises; however, two ambassadors are appointed, one to each country. In the case of the UN's Food Agencies, the Head of Mission to the Italian Republic is usually accredited as Permanent Representative. The United States maintains a separate United States Mission to the UN Agencies in Rome whose head is the United States Ambassador to the United Nations Agencies for Food and Agriculture.

Governments of states not recognized by the receiving state and of territories that make no claim to be sovereign states may set up offices abroad that do not have official diplomatic status as defined by the Vienna Convention. Examples are the Taipei Economic and Cultural Representative Offices that represent the government of the Republic of China, Somaliland's Representative Offices in London, Addis Ababa, Rome, and Washington, D.C. and the Hong Kong Economic and Trade Offices that represent the government of that territory. Such offices assume some of the non-diplomatic functions of diplomatic posts, such as promoting trade interests and providing assistance to its citizens and residents. They are nevertheless not diplomatic missions, their personnel are not diplomats and do not have diplomatic visas, although there may be legislation providing for personal immunities and tax privileges, as in the case of the Hong Kong offices in London and Toronto, for example.

Under United States law, offices which are not official diplomatic missions are officially regarded by the Department of State as "information centers"; credentials from their chiefs of mission are not accepted.[citation needed]