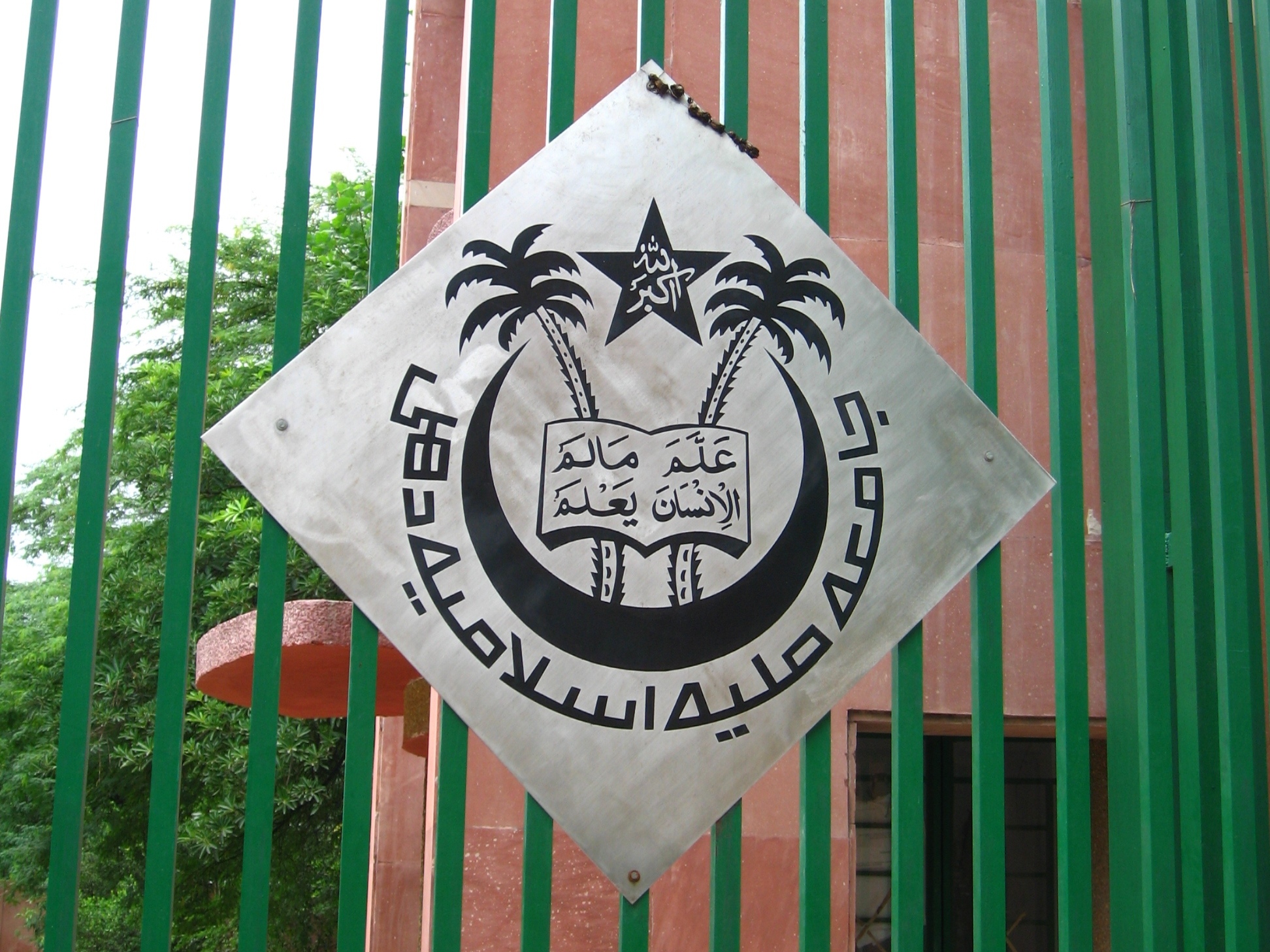 Jamia Millia Islamia (: جامعہ ملیہ اسلامیہ, : जामिया मिलिया इस्लामिया, : "National Islamic University") is an Indian Central University located in . It was originally established at in United Provinces, in 1920. It became a Central University by an act of the in 1988. In and , Jamia means "University", and Millia means "National".

The university was established by nationalist Muslims and is secular in character. Its campus is located in . There are no colleges affiliated to the university anywhere else. The university provides a large number of courses at school, undergraduate and postgraduate level.

Under the colonial British rule, two dominant trends joined hands and contributed towards the birth of Jamia. One was anti-colonial activism and the other was the pro-independence aspiration of the politically radical section of western educated Indian . In the political climate of 1920, the two trends gravitated together with as a catalyst. The idea was to project Indian Muslims as nationalist and anti British. The anti-colonial activism signified by the and the pro-independence aspirations symbolized by the of the helped to harness creative energies and the subsequent making of Jamia Millia Islamia.

Responding to Gandhi’s call to boycott all educational institutions supported or run by the colonial regime, a group of nationalist teachers and students quit , protesting against its pro-British inclinations. The freedom fighter and Muslim theologian, , laid the foundation stone of Jamia Millia Islamia at on Friday, October 29, 1920, during the meeting of the Foundation Committee of Jamia Millia Islamia.

Born out of political crisis and as a political affront to the British, it seemed for a while, Jamia would not survive the heat of the intense political struggle for the independence of India. It participated in the Bardoli resolution and sent volunteers across the country to motivate people to fight for the freedom of the country. The colonial British government soon imprisoned many of its teachers and students. In 1922, Gandhi called off the non-cooperation movement. Even as its teachers and students were being released, declared the end of the Khilafat in 1924.

Suddenly Jamia saw itself in a great crisis. Some thought it had achieved its mission, as others believed that the institution had lost its "raison d’etre" with the end of the non-cooperation and the Khilafat movements. Even the little financial assistance, that the Khilafat had been giving it, also dried up. As even prominent people started deserting it, Jamia’s total collapse virtually became an imminent possibility.

As the crisis loomed large, Hakim Ajmal Khan, Dr. and Abdul Majeed Khwaja — the first trio—supported by Gandhiji shifted Jamia from Aligarh to , in New Delhi in 1925. Although Gandhi’s contacts helped to secure financial help for Jamia, the risk of helping a Congress-backed institution under the British Raj dissuaded many willing benefactors. Orthodox Muslims also viewed Jamia as a threat to Aligarh Muslim University, the "Muslim Oxford". During those difficult days, it was Hakim Ajmal Khan who met most of Jamia’s expenses from his own pocket. Dr. M.A. Ansari and Abdul Majeed Khwaja toured India and abroad, explaining the importance of Jamia and collecting funds for this noble enterprise. Their collective intervention did avert a collapse that was almost certain.

In 1925, after long deliberation, a group of three friends studying in Germany — Dr. Zakir Hussain, Dr. Abid Husain and Dr. Mohammad Mujeeb — decided to serve Jamia. In 1928 when Hakim Ajmal Khan died it was the beginning of the second financial crisis, as it was Hakim Sahib himself who had been meeting most of Jamia’s financial needs. The leadership of Jamia then moved into the hands of Dr. Zakir Husain, who became its Vice Chancellor in 1928.

To resolve Jamia of its financial problems, a group of young Jamia teachers, led by Dr. Zakir Hussain, took a pledge to serve Jamia for the next twenty years on a salary not more than Rs. 150. This group was called the Life Members of Jamia. (This was repeated in 1942 when a second group of Jamia teachers took a similar pledge).

Jamia’s department of Printing and Publications was trifurcated in 1928 with the newly established Jamia Press at Darya Ganj, Urdu Academy, and Maktaba Jamia under the charge of Prof. Mohammad Mujeeb, Dr. Abid Husain and Mr. Hamid Ali respectively.

New campus and the teachers college

On March 1 1935, the foundation stone for a school building was laid at Okhla, then a non-descript village in the southern outskirts of Delhi. In 1936, all institutions of Jamia, except Jamia Press, the Maktaba and the library, were shifted to the new campus. The basic emphasis of Jamia was on evolving innovative education methods. This led to the establishment of a teacher’s college ("Ustadon ka Madrasa") in 1938. In 1936, Dr. M.A. Ansari died. On June 4 1939, Jamia Millia Islamia was registered as a society.

The fame of Jamia as an innovative education movement spread and dignitaries from foreign countries began visiting Jamia. Husein Raouf Bey (1933), Dr. Behadjet Wahbi of (1934), and Ms. of Turkey (1936) were some of them. Foreigners, impressed by Jamia, began working in Jamia. A German lady Ms. Gerda Philipsborn (popularly nicknamed in Jamia as "Aapa Jaan") served Jamia for many years and is buried in Jamia. In 1939, Maulana (1872-1944), a theologian and freedom fighter, came to stay in Jamia on the invitation of Dr. Zakir Husain. He started a school of Islamic Studies in Jamia, called Baitul Hikmal, propagating the ideology of .

In 1946, during Jamia’s silver jubilee celebration, one could see the crisis that India had to face in the following year: Mr. , and were on one side of Dr. Zakir Husain, the vice chancellor, on the dias; Pandit , and Sir were on the other side.

The riots following partition that shook the northern India did affect Jamia, but not its campus. Gandhiji observed that its campus remained “an oasis of peace in the Sahara” of communal violence. Maktaba Jamia alone lost books worth seven lakhs in arson.

After the attainment of Independence, Jamia continued to grow as an academic institution with a difference. Many foreign dignitaries made it a point to visit Jamia Millia Islamia during their visits to New Delhi. Among those who visited Jamia include (1954), king of (1955), crown prince Faisal of , king Reza Shah Pehlavi of (1956) and prince (1960).

In 1962, the University Grants Commission declared the Jamia a ‘Deemed to be University’. Soon thereafter, the School of Social Work was established in 1967. In 1971, Jamia started the Zakir Husain Institute of Islamic Studies, to honour Dr. Zakir Husain, who had died in 1969. BE course in Civil Engineering commenced in 1978; in 1981, the faculties of Humanities and Languages, Natural Sciences, Social Science, and the State Resource Centre were founded. In 1983, it started the Mass Communication Research Centre and the Centre for Coaching and Career Planning. In 1985, it established the Faculty of Engineering & Technology and the University Computer Centre. Academic Staff College and the Academy of Third World Studies followed in 1987 and 1988.

Jamia Millia Islamia is historically counted as among the most important nationalist institutions in India todayFact|date=March 2008. There is probably no other Indian institution which had to survive so much political opposition in its making without diluting its goalsFact|date=March 2008. Even the degrees awarded by Jamia were not considered valid in the time of the British. Jamia was accorded the status of a "central university" by a special act of the parliament in December 1988. [http://www.education.nic.in/cd50years/x/7H/8M/7H8M0101.htm]

In early 2006 the king of Saudi Arabia paid a historic visit to the university and donated a record $30 million for construction of a library. [http://www.hindu.com/thehindu/holnus/003200606020330.htm] Its scenic cricket ground (popularly known as the "Bhopal Ground" ) has hosted a number of matches and a women's cricket . Notable alumni of the university include , , and .Besides its seven faculties, the Jamia has a number of centres of learning and research, like Mass Communication Research Centre (MCRC), Academy of Third World Studies (ATWS) etc. The Jamia offers various undergraduate and postgraduate information and technology courses. Apart from this, the Jamia has a campus wide network which connects a large number of its departments and offices.

Faculty of :Historically speaking, this is the faculty which identifies itself most, with the Jamia's heritage of being a pioneering institution in the field of teaching. Its parent institution, the Teachers Training College was established by renowed educator and Jamia's most famous patron Dr. Zakir Hussain in 1938.

This faculty, besides offering B.Ed.(Bachelor of Education), M.Ed.(Master of Education) and M.A.(Master of Art) courses with various specializations also conducts and programmes in . It also offers a diploma in elementary teacher education programme besides conducting research.

Faculty of and :The Faculty has seven departments— , English and Modern European Languages, , and , , Persian, and — offering programmes in Ph.D., M.Phil. (Pre-PhD), postgraduate, undergraduate, diploma and certificate courses. The curricula of the faculty focuses upon the composite nature of the rich and myriad facets of the literature and culture of India.

Faculty of :The Faculty of Law, Jamia Millia Islamia was established in 1989. In addition to the Five year integrated BA,LLB course, the Faculty is also running an four course presently in three streams, i.e., Personal Law, Corporate Law and Criminal Law and a Ph.D. programme.

Faculty of :Besides offering Bachelor programmes in , , , , , , , and , and this faculty has programmes leading to a masters degree in related disciplines as well. Some diploma and . courses are also offered.

Faculty of and :A relatively new faculty, it offers undergraduate and postgraduate courses in architecture and ekistics besides a Ph.D. programme. It's M.A. in Architecture Education is the only course of its kind in India.

Centre for Interdisciplinary Research in Basic Sciences (CIRBAS) is amongst a newly created research centre in Jamia Millia Islamia, New Delhi. It is located in the Jamia's Main Campus and is funded by the University Grants Commission (UGC).

Fakhruddin T. Khorakiwala Centre for Information Technology also popularly known as FTK-CIT is a state-of-the art centre of Jamia providing IT services and facilities to all its staff members and students. The Centre has recently shifted to a New Building near Ansari Auditorium. Other centres:Besides these faculties, there are twenty more centres of learning and research covering a wide range of subjects. Notable among the other courses offered at Jamia are M.A. in at the [http://ajkmcrc.org/ AJK Mass Communication and Research Center] and at [http://www.jmi.nic.in/cms/cms.htm Centre for Management Studies] .

For a complete list of all faculties/centres of Jamia and the courses offered by them please see: [http://jmi.nic.in/AcademicStructure.htm List of Faculties/Centres] .