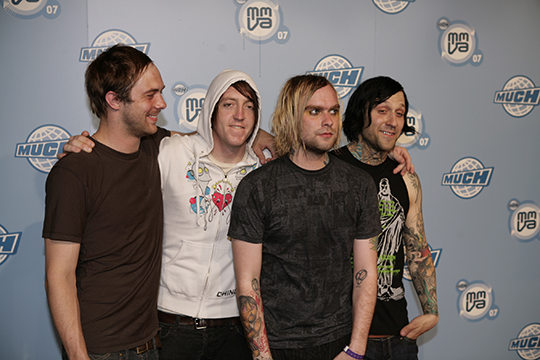 The Used is a rock band from , USA. Their sound has been classified under many genres and subgenres of rock. They signed with in late and rose to fame in June 2002 after releasing their debut self-titled album, "The Used". They followed up with their second album, "", in September and their third album, "", in May 2007. An EP, "", was released in February 2008 that featured most of the band's s to date. They are currently working on their fourth studio album, due out in early . The band has achieved both Gold and Platinum status in over 6 countries worldwide.

The Used officially formed in 2000, but members had played in a many previous bands since the early 1990s which helped lead to the formation of The Used. Founding member along with Quinn Allman and Jeph Howard were trying to start a new band and needed a singer. They had a bunch of music for songs but no lyrics or vocals to go along with it. Tryouts for singers were held in Branden's bedroom, but they weren't satisfied with anyone they heard, and described the tryouts as being terrible. Quinn then remembered from school and other local previous bands they played in and called him to see if he was interested in trying out. Bert heard they were looking for a singer and was going to give them a call, but he received a call from Quinn the night before he planned to call them. He met up with the other members and liked the music they wrote. After being given music that the band had written, Bert wrote the lyrics to what would become "Maybe Memories" and returned the next day to record a demo version of the song. The band welcomed him immediately and from there on out, Bert took over the vocals. Throughout all of this, the band members suffered from poverty, homelessness, and substance abuse. They panhandled for change in order to buy food to stay alive while at the same time hating the Mormon town that they lived in and the people that lived there. [ [http://allmusic.com/cg/amg.dll?p=amg&sql=11:fzfpxqq0ld6e~T1 allmusic ((( The Used > Biography ))) ] ] The band's name was born when their friends claimed they felt "used" when contact was lost between them and band members due to them becoming more involved in the band.

Used continued to write songs together and recorded a demo album in Branden's bedroom that fans titled "". Drummer Branden Steineckert sent their songs to producer from the group Goldfinger. After he heard "", he wanted to get them signed because he believed this band had something no other band had and could change what's happening in the music world. John flew the band to LA taking them out of their home state for the first time in their lives and played the songs for various record executives to try and get them signed, however, the first few weren't interested and it left John discouraged because he felt this band was like no other. Eventually, more people got hold of the demo and a few record companies were eager to sign them. They decided to sign with in late .

In , it was discovered that a band had already trademarked the name "Used," so they decided to add "The" to their name, thus becoming The Used. Their self-titled debut album was released on , 2002. The album received mixed reviews and featured four singles: "", "", "", and "", with the latter three entering the charts. The album has been certified gold.

Tragedy struck The Used in when lead singer Bert McCracken's ex-girlfriend, who was pregnant with his child, died of a drug overdose. [ [http://www.theage.com.au/news/Music/Scream-it-out-loud/2005/06/02/1117568305743.html Scream it out loud - Music - Entertainment - theage.com.au ] ] Their second studio album was thus named "", released as a reference to the tragedy Bert dealt with during the recording. The song "Hard to Say" was a reference to Bert's ex-girlfriend; although he wrote the song years earlier, it fit the moment and Bert felt that it was the right time to release it.Fact|date=June 2008 The album received generally favorable reviews [ [http://www.metacritic.com/music/artists/used/inloveanddeath The Used: In Love and Death (2004): Reviews] ] and spawned three singles: "Take It Away", "" (which earned them their first nomination), and "", before being re-released in 2005. "" (a and Queen cover song performed with ) was featured as a bonus track on the re-release. The album has been certified gold. After finishing up an international tour for the album, The Used took about 7 months off before starting to work on their next album. Throughout the summer of , rumors spread among fans that Branden was no longer in the band. Then on , , The Used announced and confirmed that Branden was no longer a member of the band.

On , , The Used released a live CD/DVD package, "Berth", which included a full live concert shot on the 2005 tour in . It continued where "Maybe Memories" left off and showed what the band had been up to since they released "In Love and Death". It also gave a preview of "". Berth has been certified gold. The Used spent most of the early part of 2007 on the Taste of Chaos tour, before their third album, "" was released , . They also headlined the festival. In June, The Used played the for the first time ever, and also received their second nomination for Best International Group Video, for "". The Used were scheduled to play in June and July, in support of their album, but had to cancel because Bert required surgery to remove a node from his . After Bert recovered, they played the Reading and Leeds festivals in August, and went on to tour the in September. "" charted in the top 5 in over seven countries, and there were 4 singles released: "", "", "Pretty Handsome Awkward", and "Paralyzed". Although was chosen as the new drummer, of recorded drums for the album. The recording session for this album was the longest of any The Used album, as it took them over six months to record. "" received mixed reviews [ [http://www.metacritic.com/music/artists/used/liesfortheliars The Used: Lies For The Liars (2007): Reviews ] ] and has 8 B-sides. The Used had considered making a double album since 19 songs were recorded, but this idea was dropped after they decided to save the songs for a future release.

Before "" was even released, The Used had planned on releasing an of the album's B-sides not long after it dropped. However, it was delayed due to problems with their label, and for a time it didn't appear that it would be released at all. Finally on , the EP was released, titled "", which featured B-sides from all their studio albums. It was only released on digital music stores and it has charted #13 on iTunes' top 100 albums. The Used have worked on their 4th album throughout all of 2008 and will finish it up in October. They took many breaks while working on it to be the headlining band on the inaugural "Get a Life Tour" and to play shows , and , . The album is produced by producer , [ [http://www.buzznet.com/web/music/journals/entry/2456051/used-team-panic-disco-producer/ The Used Team With Panic at the Disco Producer] ] making this their first studio album not produced by John Feldmann. They decided to go with a different producer because they "want [the album] to be very different" from everything else that they've done in the past. [ [http://yousingiwrite.blogspot.com/2008/04/q-with-jeph-howard-of-used.html You Sing, I Write: Q&A with Jeph Howard of The Used] ] This will also be the first studio album by The Used to feature as the drummer. The album will be released by the beginning of 2009