Senator Gravel supports the FairTax proposal that calls for eliminating the Internal Revenue Service and the income tax and replacing it with a progressive national sales tax of between tax inclusive 19 and 23 percent on newly manufactured items and services. As compensation for necessities, such as food, there would be a “prebate” to untax households up to the poverty level. He calculates that an average family of three that lives below the poverty level would receive an additional $3,000 a year.[1]

In his campaign pronouncements Senator Gravel has identified medicine and medical technology costs as 'one of the leading causes of bankruptcies'.[1] He is an advocate for a 'universal healthcare system that provides equal medical services to all citizens, paid for by a retail sales tax (a portion of the Progressive Fair tax).'[2] Citizens would pay nothing for health benefits.

He proposes a National Health Care Voucher plan. Using vouchers paid for by the government, patients would be free to choose their own doctor.[3]

Senator Gravel has recorded his call for Congress to 'stop raiding the Social Security Trust Fund'.[1] He proposes identifying the interests of individual beneficiaries so they can leave their surplus funds to their heirs.

Gravel wants to put real money, rather than borrowed money, in the Social Security Trust Fund. He advocates investing it properly.

Senator Gravel proposes to index veteran health care entitlements to take full account of increases in the costs of care and medicine. He has said that he would make permanent the 100 percent disability ratings of those diagnosed as suffering from Post-traumatic stress disorder (PTSD).[1]

He has pledged that he would fully fund and resource the Veterans Administration.[4] Gravel would ensure that veterans receive full and unambiguous funding for their most important needs, including aforementioned treatment for post traumatic stress disorder.

Senator Gravel has advocated that carbon energy should be taxed to provide the funding for a global effort to bring together the world's scientific and engineering communities to develop energy alternatives to significantly reduce the world’s energy dependence on carbon.[5]

Gravel believes that global climate change is a matter of national security and survivability of the planet. He supports swift action to reduce America's carbon footprint in the world by initiating legislation to tax carbon at the source and cap carbon emissions. He would also initiate a massive scientific effort, integrating the world's scientific and engineering community, to end energy dependence on oil and integrate the world's scientific community in this task.

Gravel supports a free and open Internet with unlimited access to all sites regardless of content. He supports legislation and regulation that keeps citizens in control of their internet usage and promotes free speech.

The Senator's October 2006 speech to the New Hampshire Institute of Politics entitled Stepping Back From Imperialism: Redirecting American Foreign Policy, revealed his analysis of pressing domestic and foreign policy issues and the policies he would address if elected President.[6] Prominent within that was his categorical expression of the desire to effect the immediate termination of United States military involvement in Iraq and the withdrawal of all remaining US military personnel from that country.

His remarks could otherwise be encapsulated as follows:

'The reality is, the United States is No. 1 only in weaponry, consumer spending, government and personal debt, in the number of people we have in prison and... in delusion.' 'The preeminent threat in the affairs of nations is nuclear proliferation. Sanctions (against nuclear states) do not work... [and are] in most cases,... immoral.' 'Take our troops out of Iraq immediately, and move aggressively toward a diplomatic solution bringing the United Nations, the European and Asian communities, and regional players... into a process to help end the civil war in Iraq and establish stability in the region.' 'The US (with allies, regional powers and the UN)... must sponsor direct negotiations between Israel and the Palestinian Authority, including Hamas... with the goal of a two-state solution.. which would involve guarantee[ing] the demilitarized borders of both parties, guarantee[ing] Israel's right to survive... and making a commitment to the Palestinians to raise their economic standards to that of Israel.'

His specific foreign policy related proposals and initiatives are:

He is highly critical of the President and Bush Administration's public characterization of nations such as Iran, Syria, North Korea, Cuba, and Libya as members of an 'axis of evil'.[7]

He has stated his firm opposition to the prospect of military confrontation with Iran.[8]

Senator Gravel has called upon Congress to pass legislation to outlaw the practice of torture against detainees of the Government and military. His 1 March 2007 media release states:

“The Constitution is very clear that prisoners of war are the responsibility of the Congress. The Bush administration has unlawfully taken that power without Constitutional justification. The Congress has been derelict in its duty to see that enemy combatants are treated humanely within the guidelines of the Geneva Conventions, and has been equally neglectful in its response to the President’s unlawful use of torture.”

He has pledged that, if elected President, he would 'vanquish' the Military Commissions Act of 2006, by which the writ of habeas corpus has been suspended for aliens designated "unlawful combatants" and which he also claims to found authorization for CIA torture practices in overseas detention facilities.

In June 2008 Gravel spoke in support of an organization running a petition drive to get on the 2008 General Election ballot in New York City a referendum to create a Citizens' Commission with subpoena power to re-investigate the September 11, 2001 attacks. He said that President George W. Bush, Vice President Dick Cheney and former Central Intelligence Agency Director George Tenet and others should be subpoenaed.[9] 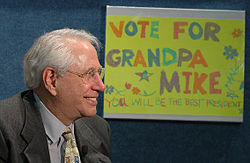 Among his proposals and/or remarks to the New Hampshire Institute of Politics were:

In his February 2007 address to the Democratic National Committee Winter Conference, Gravel referred to the prospect of same-sex marriage in the following terms:

"Since the Second World War, various political leaders have fostered fear in the American people - fear of communism, fear of terrorism, fear of immigrants, fear of people based on race and religion, fears of gays and lesbians in love who just want to get married. Fear of people who are just different. It is fear that allows our political leaders to manipulate us all and to distort our national priorities."

Gravel's media release of 26 February 2007 explicitly stated his support of the full range of gay civil rights including same-sex marriage recognition, opposition to Don't ask, don't tell policy, extension of the scope and effect of hate crimes legislation to cover hate violence against gays and lesbians, and the removal of all other remaining legal discrimination against LGBT people.

Senator Gravel has stated that drug abuse should be treated as a medical problem rather than a criminal matter.

In an interview with the Iowa Independent, Gravel was asked what his policy would be on cocaine and methamphetamine. He responded, "We need to legalize the regulation of drugs. The drug problem is a public health problem. It’s not a criminal problem. We make it a criminal problem because we treat people like criminals. You take a drug addict, you throw him in jail, you leave him there, and he learns the criminal trade so that when he gets out you have recidivism."[10] He disparages the appropriateness of prosecuting what has been termed the 'war on drugs' and instead favors the decriminalization of minor drug offenses and increasing the availability and visibility of substance abuse treatment and prevention in prisons and in the free community.

He advocates legalizing marijuana so that it can be sold in stores next to alcohol.[11] He also advocates eliminating mandatory minimum sentencing laws, particularly as they may apply to nonviolent drug offenders.[12]

His campaign website notes the comparatively sizeable prison population and high rate of incarcerations in the United States. He disparages the appropriateness of prosecuting what has been termed the 'war on drugs' and instead favors the decriminalization of minor drug offenses and increasing the availability and visibility of substance abuse treatment and prevention in prisons and in the free community. He advocates the wider use of specialist drug courts through which addict offenders may be committed to supervised substance abuse treatment rather than punitive incarceration.

Senator Gravel in principle does not object to the use of embryonic stem cells for medical research purposes.[13]

He is avowedly pro-choice on the issue of abortion and women's reproductive rights. In response to the April 2007 United States Supreme Court opinion in Gonzales v. Carhart affirming the legality of the Partial-Birth Abortion Ban Act of 2003, he issued the following statement to that end:

"I am opposed to today's ruling or any ruling that places restrictions on reproductive freedom. Today's decision authorizes federal intervention to prohibit a procedure that the American College of Obstetricians and Gynecologists has found at times to be medically necessary. Any decision on abortion should remain between a woman and her doctor. There is no room for interference from politicians and judges."[14]

At the February 2007 Democratic Presidential Candidates Forum he has said that he is in favor of some degree of public financial assistance to the campaigns of Presidential candidates.

In remarks at the Carson City, Nevada, Democratic Presidential Candidates Forum of February 2007, Senator Gravel has said that he disfavors wholesale or widespread deportation of illegal immigrants found residing in the United States.

The campaign website declares that he favors a guest worker program and 'setting up naturalization procedures that would fairly bring existing illegal immigrants into legal status'.

He has described the North American Free Trade Agreement as 'a disaster for the working class of both the U.S .and Mexico' which 'has led to a wave of immigrant workers looking for work in the US job market'. His position statement speaks in favor of 'major structural changes... to NAFTA... [and] reforming unfair trade policies'.

He declared himself an opponent of the death penalty in his book Citizen Power, published in 1972.

Senator Gravel proposes an Amendment to the U.S. Constitution and an accompanying Federal Law to bring about a means of citizen-initiated national lawmaking in addition to the existing means of lawmaking through the institutions of representative government (i.e., Congress and the President).[16]

The 'Democracy Amendment' would:

1) amend the Constitution asserting the legislative powers of the people,
2) outlaw the use of monies not from natural persons in initiative elections,
3) create an Electoral Trust and define the role of its trustees,
4) legitimize national elections to vote on the enactment of federal laws arising from citizen-initiated legislative proposals ('national initiatives').

The 'Democracy Act' as a federal law would:

The authority for effecting such a constitutional reform, is proposed to derive from Article VII of the US Constitution.

The Senator approved the release of a statement on 13 February 2007[17] outlining his view that 'impeachment (of President Bush)... is, in this case, insufficient' and that he 'supports a congressional inquiry into whether or not (the President) has overstepped his authority and broken the law'.

His Presidential campaign website states that Senator Gravel 'fully supports the Second Amendment to the United States Constitution'. It also states that he advocates a licensing program whereby a potential gun owner must be licensed as well as properly trained with a firearm before s/he may own one.