The first recorded football match involving a side from the Dutch East Indies was against a side from Singapore on March 28, 1921. The match was played in Batavia and was won 1–0. This was followed by matches against an Australian XI in August 1928 (won 2–1) and a team from Shanghai two years later (4–4).[1]

In 1934, a team from Java represented the Dutch East Indies in the Far Eastern Games played in Manila, Philippines. Despite defeating Japan 7–1 in their first match,[2] the next two matches ended in defeats (2–0 to China and 3–2 to the host nation) resulting in a second-place finish in the tournament for the Javan team. Although not recognized by PSSI, these matches are treated as the first matches involving the Indonesian national side by the World Football Elo ratings.[3] 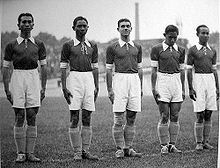 Dutch East Indies players line up in Reims, France in 1938 to face Hungary.

Indonesia, was the first Asian team to participate in the World Cup when they qualified to the 1938 tournament. A 6–0 first-round loss in Reims to eventual finalists Hungary remains the country's only appearance in the World Cup.

In 1958, the team tasted their first World Cup action as Indonesia in the qualifying rounds. They got past China in the first round, but subsequently refused to play their next opponents Israel due to political issues. The team subsequently suffered a ban from FIFA World Cup from 1958 to 1974 due to unfavorable internal and external political situation. It was only almost two decades later that Indonesia returned to the fold.

Indonesia participated in the AFC Asian Cup 4 times. In South East Asia they only less than Thailand with participated 6 times, but Indonesia recorded better performance with 2 match victory in the tournament, while Thailand only recorded once.

Indonesia eventually established better record in 2004, beating Qatar 2–1 to record their first ever victory in the history of tournament. Nevertheless, as luck had it, the win was unfortunately not enough to qualify for the second round.

Their participation in 2007 was especially notable as Indonesia acted as one (of four) co-hosts of the tournament. The national team proceeded by defeating Bahrain 2–1 in the first match, however, the next two ties proved tough as they face Asian giants Saudi Arabia and South Korea. Despite arguably decent performance both ties ended in narrow 1–2 and 0–1 defeat—thus sealing their fate as third place in the group.

Indonesia has somewhat decent record in ASEAN Football Championship (AFF Championship), reaching the final four times (2000, 2002, 2004, and 2010), albeit never able to lift the trophy. Their claim of regional titles came via Southeast Asian Games in 1987 and 1991, whilst only getting bronze or silver medals in recent time.

It was perceived that, right after the historic 2004 Asian Cup campaign, Indonesia might be on verge of growing stature in ASEAN football scene. Under the guidance of former Aston Villa and England striker Peter Withe, the South-East Asian outfit looked set to continue success in terms of football development and FIFA World Rankings. However they failed on the group stage of ASEAN Football Championship, and on January 18, 2007, Withe was immediately sacked. He was replaced by Bulgarian Ivan Venkov Kolev.

After the Withe era, the inability to fulfill ASEAN target has been cited as reason for Indonesian managerial rolling door. During two years time Indonesia national team had seen Kolev succeeded by local coach Benny Dollo, whom was in turn getting sacked in 2010. As of recently Indonesian national team head coach position is held by Alfred Riedl, former national coach of Vietnam and Laos. But he failed to lift any cups during his time and in July 2011, he was replaced by Wim Rijsbergen.

The regional 1998 ASEAN Football Championship tournament was perhaps infamous in respect to Indonesian football history. In what was supposedly a sporting event, the group stage match between Thailand and Indonesia was marred with an unsportsmanlike attempt. At the time both teams had already qualified for semi-finals, but with knowledge that winners would have to face hosts Vietnam, while the losing team would play the supposedly weaker Singapore. There was also technical incentive that facing Vietnam would mean moving training bases from Ho Chi Minh City to Hanoi – which none of the teams would wish to do.

The first half saw very little action as both teams barely making attempt to score. During the second half both teams managed to score, partly thanks to half-hearted defending, resulting in a 2–2 tie after 90 minutes. However the real infamy didn't take place until extra time, in which Indonesian defender Mursyid Effendi deliberately kicked the ball into his own goal, despite the Thais' attempts to stop him doing so. FIFA fined both teams $40,000 for "violating the spirit of the game", while Mursyid Effendi was banned from domestic football for one year and international football for life.

Ironically in the semi-finals, Thailand lost to Vietnam, and Indonesia also lost to Singapore, pitting the teams together once again for the third-place playoff. Indonesia eventually won by penalty shootout, as in the final, unfancied Singapore made one of the competition's biggest shocks by defeating Vietnam.

Indonesia received a bye to the second round along with 21 others who advanced past the first round in 2014 qualification. Having only 5 days to prepare for their first match, Indonesia managed to equalize 1–1 against the home team Turkmenistan. Indonesia was the only away team that did not lose on their first leg. On the second leg, playing in their home stadium, Indonesia managed to advance to the third round after winning 4–3 against the guest team.

In the third round of qualification, Indonesia joins Group E with Iran, Qatar, and Bahrain as determined in the preliminary draw in Brazil on July 30, 2011. 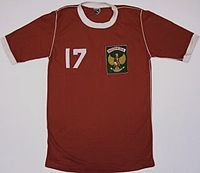 During the Dutch colonial era, the team competed as Dutch East Indies in international matches and played in an orange jersey, the national colour of the Netherlands. There are no official documents about the team's kit, only several black-and-white photos from the match against Hungary in the 1938 FIFA World Cup, but unofficial documents stated that the kit consisted of an orange jersey, white shorts and light blue socks.[4] After Indonesia's independence, the kit consists the colours of the country's flag, which are red and white. A combination of green and white has also been used for the away kits, and was used from the team's participation in the 1956 Summer Olympics in Melbourne, Australia, until in the mid 1980s.[5] During the 1990s, the colour changed to all-red for the home kit and all-white for the away kit. In 2007, just before the start of the Asian Cup, the original colours were restored.

The shirt badge has always been the Garuda Pancasila, Indonesia's coat of arms. This is where the inspiration of the song Garuda di Dadaku (Garuda on My Chest) came from. The song is a modified version of a Papuan folk song, Apuse, with the lyrics changed.

PSSI signed a deal with Nike to sponsor football uniform on Indonesia national football team. The first kit of Nike that Indonesian wore is Red-White-White (Home) combination and for away was white-red-red uniform. This kit was worn at 2007 ASEAN Football Championship. Shortly before the Asian Cup, Nike introduce a new kits with White-Green-White combination and Red-White-Red for home. The new colors stayed for a year. In 2008 AFF Suzuki Cup, they started wearing new kits with same colors. By 2010, Nike design Indonesian uniform with Garuda water mark on the both home and away jersey. In addition, Nike also went back to 2007 colors for home but the away is not used red for the short and socks, instead White-Green-Green combination. The home kit is red-white-white combination, from the Flag of Indonesia. The 2010–2012 home kit have issue when they're playing with opponent that wear all white uniform. The solution was solve by wearing Red-Green-Green combination (on away games) or all reds uniform (on home games). On 8 September 2011, Indonesia U-19 team wore old colours combination with red shirt and white shorts as usual, but they used red socks which usually used for training when they forced a draw against Laos in AFF U-19 Youth Championship in Myanmar.[6][7] There is also a combination for away colours. Indonesia U-23 team wore white home socks when they faced Persebaya 1927.[8]

Other stadia used include:

The following players have also been called up to the Indonesia squad within last 12 months and are still available for selection.

* The players in bold typeface are still active in football.

* The players in bold typeface are still active in football.