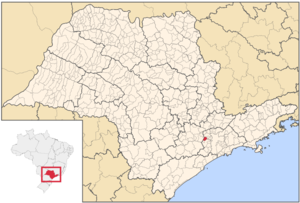 Itapevi is a in the state of São Paulo, . The city is located 15 miles to the west of São Paulo city, in the metropolitan area, with access for the Castello Branco and Raposo Tavares highways. The population appraised well into 2006 is as of 202.683 inhabitants (IBGE), and the territorial area is as of 79km², the one to is a result of in a density demographic as of 2,565.60/km². The altitude varies between 740 mt. in the center of the city to 1035 mt. in the mountain range of Itaqui. Its climate is subtropical transition, with annual average temperature of approximately 18.5°C (15°C in July; 22.5°C in February). This place name comes from the , where it means "river of boats rocks" .

This suburban city has access to the rapid-transit system of on line B.