Bank Melli Iran (Persian: بانک ملی ایران) (BMI), also called the National Bank of Iran, is the first national Iranian bank. The bank was established in 1927 by the order of the Majlis (the Iranian Parliament) and since then has consistently been one of the most influential Iranian banks.

In 1931 the Iranian Majlis authorized the bank to print and distribute the Iranian currency rial. BMI acted as the central bank of Iran until Bank Markazi was established in 1960, after which all of its central banking responsibilities were transferred to the new central bank. Over the past 80 years, BMI has grown to become a large retail bank with several domestic and international branches. BMI opened its first foreign branch in Hamburg, Germany in 1965.[1]

BMI is now the largest commercial retail bank in Iran and in the Middle East with over 3300 branches and 43,000 employees.[2] Bank Melli Iran has 18 international branches and services in 11 countries:[citation needed]

BMI is owned and operated by the government of Iran.

All banks in Iran must follow the banking principles and practices described in the Islamic Banking law of Iran passed in 1983 by the Islamic Majlis of Iran.[3] According to this law, banks can only engage in interest-free Islamic transactions (interest is considered as usury or riba and is forbidden by Islam and its holy book the Quran). The permitted commercial transactions involve exchange of goods and services in return for a share of the assumed profit. All such transactions are performed through Islamic contracts, such as mozarebe, foroush aghsati, joale, salaf, and gharzol-hassane. Details of these contracts and related practices are contained in the Iranian Interest-Free banking law and its guidelines. 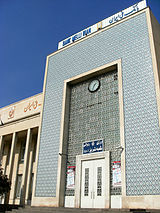 On January 26, 1981, a bomb exploded outside the San Francisco offices of Bank Melli Iran. According to the National Memorial Institute for the Prevention of Terrorism, a bomb exploded at BMI branch in San Francisco, shattering windows and damaging the wall of the building where the explosive was planted. No injuries were reported and no arrests were made. A caller from the Jewish Defense League claimed credit for the attack.[6]

Following the September 1997 suicide bombing in Jerusalem, five American students who had been wounded were awarded $251 million in compensatory and punitive damages against the government of Iran and the Iranian Revolutionary Guard Corps by Judge Ricardo M. Urbina, under the Flatow Amendment of the Foreign Sovereign Immunities Act, in accordance with Section 201a of the Terrorism Risk Insurance Act of 2002, which states that "in every case in which a person has obtained a judgment against a terrorist party on a claim based upon an act of terrorism ... the blocked assets of that terrorist party ... shall be subject to execution". Since most Iranian assets in the United States had been withdrawn after the embassy hostage crisis, the only substantial monetary asset left was approximately $150,000 in the Bank Melli's account in the Bank of New York. Before turning over the funds to the five students, however, the Bank of New York sued for a legal decision regarding its responsibilities in the case. The United States Department of Justice, speaking as amicus curiae in support of Bank Melli, advised that the bank had no responsibility for turning the funds over to the students; in March, 2006, Judge Denise Cole ruled against them, and was upheld by the Second Circuit Court in April, 2007. Bank Melli then withdrew the funds from Bank of New York.[7]

On 25 October 2007, the United States imposed unilateral sanctions against Iran. These sanctions include new measures to reduce Iran’s ability to conduct financial transactions between the state-owned banks of Iran and United States citizens or private organisations.[8] Bank Melli was included in these sanctions, on the grounds that, besides its other customers, Bank Melli provides financial services to Iran’s nuclear and ballistic missile programmes.[8] A fact sheet released by the US Treasury Department also asserts that between 2002 and 2006 Bank Melli sent at least $100 million to Hamas, Palestinian Islamic Jihad, and other groups, via the Quds Force, a branch of the Iranian Revolutionary Guard.[7]

In a statement published on its web site, BMI refutes the US allegations and categorically denies that it has ever been involved in any "deceptive banking practices".[9]

On 16 June 2008, the European Union, and the UK, imposed further unilateral sanctions against Iran. Sanctions will include the European Union freezing the assets of Bank Melli, in response to Tehran's refusal to suspend its uranium enrichment program.[10]