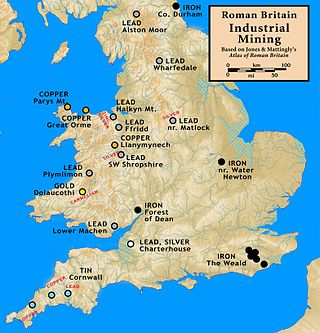 Mining was one of the most prosperous activities in Roman Britain. Britain was rich in resources such as copper, gold, iron, lead, salt, silver, and tin, materials in high demand in the Roman Empire. The abundance of mineral resources in the British Isles was probably one of the reasons for the Roman conquest of Britain. They were able to use advanced technology to find, develop and extract valuable minerals on a scale unequaled until the Middle ages. 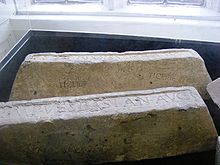 Lead was essential to the smooth running of the Roman Empire.[1] It was used for piping for aqueducts and plumbing, pewter, coffins, and gutters for villas, as well as a source of the silver that sometimes occurred in the same mineral deposits.

The largest Roman lead mines were located in or near the Rio Tinto (river) in southern Hispania.[2][3]In Britannia the largest sources were at Mendip, South West England and especially at Charterhouse. In 49 C.E., six years after the invasion and conquest of Britain, the Romans had the lead mines of Mendip and those of North West England and Wales running at full shift. By 70 C.E., Britain had surpassed Hispania as the leading lead-producing province. The Spanish soon lodged a complaint with Emperor Claudius, who in turn put limits on the amount of lead being produced in Britain. However, these limits were ignored and had the opposite effect on British lead production.[4][citation needed]

The most important use of lead was the extraction of silver. Lead and silver were often found together, with the silver being encased in the lead ore. The Roman economy was based on silver, as the majority of coins were minted from the precious metal.

The process of extraction, cupellation, was fairly simple. First, the ore was heated until the lead, which contained the silver, separated from the rock. The lead was removed, and heated up to 1100° Celsius using hand bellows. At this point, the silver separated from the lead, and was put into molds which, when cooled, would form ingots that were to be sent all over the Roman Empire for minting.[1] 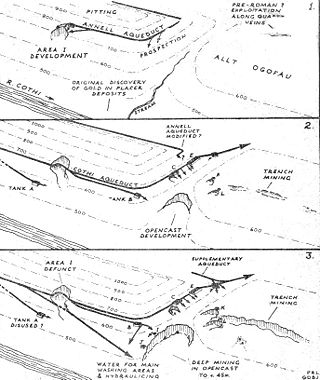 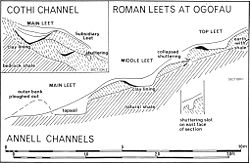 Britain's gold mines were located in Wales at Dolaucothi. The Romans discovered the Dolaucothi vein soon after their invasion, and they used hydraulic mining methods to prospect the hillsides before discovering rich veins of gold-bearing quartzite. The remains of the several aqueducts and water tanks above the mine are still visible today. The tanks were used to hold water for hushing during prospecting for veins, and it involved releasing a wave of water to scour the ground and remove overburden, and expose the bedrock. If a vein was found, then it would be attacked using fire-setting, a method which involved building a fire against the rock. When the hot rock was quenched with water, it could be broken up easily, and the barren debris swept away using another wave of water. The technique produced numerous opencasts which are still visible in the hills above Pumsaint or Luentinum today. A fort, settlement and bath-house were set up nearby in the Cothi Valley. The methods were probably used elsewhere for lead and tin mining, and indeed, were used widely before explosives made them redundant. Hydraulic mining is however, still used for the extraction of alluvial tin.

Long drainage adits were dug into one of the hills at Dolaucothi, after opencast mining methods were no longer effective. Once the ore was removed, it would be crushed by heavy hammers, probably automated by a water wheel until reduced to a fine dust. Then, the dust would be washed in a stream of water where the rocks and other debris would be removed, the gold dust and flakes collected, and smelted into ingots. The ingots would be sent all across the Roman world, where they would be minted or put into vaults.[1]

There were many iron mines in Roman Britain. The index to the Ordnance Survey Map of Roman Britain lists 33 iron mines: 67% of these are in the Weald and 15% in the Forest of Dean. Because iron ores were widespread and iron was relatively cheap, the location of iron mines was often determined by the availability of wood for smelting fuel, which Britain had in abundance. Great amounts of iron were needed to fuel the Roman war machine, and Britain was the perfect place to fill that need.[5]

Many underground mines were constructed by the Romans. Once the raw ore was removed from the mine, it would be crushed, then washed. The less dense rock would wash away, leaving behind the iron oxide, which would then be smelted using the bloomery method. The iron was heated up to 1500°C using charcoal. The remaining slag was removed and generally dumped.[5]

After being smelted, the iron was sent to forges, where it was reheated, and formed into weapons or other useful items. 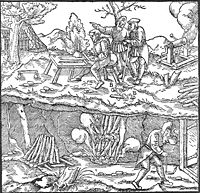 Fire-setting underground from De Re Metallica

The majority of mine workers were slaves, although skilled artisans were needed for building aqueducts and leats as well as the machinery needed to dewater mines and to crush and separate the ore from barren rock. Reverse overshot water-wheels were used to lift water, and sequences of such wheels have been found in the Spanish mines. A fragment of a wheel found at Dolaucothi shows they used similar methods in Britain.

The working conditions were poor, especially when using fire-setting, an ancient mining method used before explosives became common. It involved building a fire against a hard rock face, then quenching the hot rock with water, so that the thermal shock cracked the rock and allowed the minerals to be extracted. The method is described by Diodorus Siculus when he discussed the gold mines of Ancient Egypt in the first century BC, and at a much later date by Georg Agricola in his De Re Metallica of the 16th century. Every attempt was made to ventilate the deep mines, by driving many long adits for example, so as to ensure adequate air circulation. The same adits also served to drain the workings.