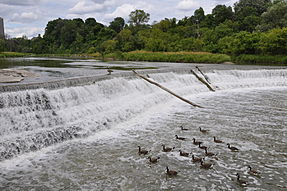 A weir was built on the Humber River (Ontario) to prevent a recurrence of a catastrophic flood.

Flood control refers to all methods used to reduce or prevent the detrimental effects of flood waters.[1]

Floods are caused by many factors: heavy rainfall, highly accelerated snowmelt, severe winds over water, unusual high tides, tsunamis, or failure of dams, levees, retention ponds, or other structures that retained the water. Flooding can be exacerbated by increased amounts of impervious surface or by other natural hazards such as wildfires, which reduce the supply of vegetation that can absorb rainfall.

Periodic floods occur on many rivers, forming a surrounding region known as the flood plain.

During times of rain or snow, some of the water is retained in ponds or soil, some is absorbed by grass and vegetation, some evaporates, and the rest travels over the land as surface runoff. Floods occur when ponds, lakes, riverbeds, soil, and vegetation cannot absorb all the water. Water then runs off the land in quantities that cannot be carried within stream channels or retained in natural ponds, lakes, and man-made reservoirs. About 30 percent of all precipitation becomes runoff[1] and that amount might be increased by water from melting snow. River flooding is often caused by heavy rain, sometimes increased by melting snow. A flood that rises rapidly, with little or no advance warning, is called a flash flood. Flash floods usually result from intense rainfall over a relatively small area, or if the area was already saturated from previous precipitation.

Even when rainfall is relatively light, the shorelines of lakes and bays can be flooded by severe winds—such as during hurricanes—that blow water into the shore areas.

Coastal areas are sometimes flooded by unusually high tides, such as spring tides, especially when compounded by high winds and storm surges.

Adeloye & Rustum (2011) analyse the causes of the flooding problems being encountered to recommend sustainable management solutions to them. Data on climate, drainage infrastructures and physical planning regulations were collected and extensively analysed. These were combined with evidence from field inspection and discussion with stakeholders, including relevant government departments, university researchers and selected residents. The investigation revealed that, contrary to popular wisdom, climate change or unusually high rainfall is not the primary cause of the flooding problems in Lagos. Rather, the increased urbanisation, lax planning laws in relation to the erection of buildings in flood plains and the lack or inadequacy of storm drainage facilities in the city are to blame. It is argued that a lasting solution to the flooding problem will require the incorporation of sustainable drainage systems within the existing flood management strategy for the city and planning for this must start now.

Flooding has many impacts. It damages property and endangers the lives of humans and other species. Rapid water runoff causes soil erosion and concomitant sediment deposition elsewhere (such as further downstream or down a coast). The spawning grounds for fish and other wildlife habitats can become polluted or completely destroyed. Some prolonged high floods can delay traffic in areas which lack elevated roadways. Floods can interfere with drainage and economic use of lands, such as interfering with farming. Structural damage can occur in bridge abutments, bank lines, sewer lines, and other structures within floodways. Waterway navigation and hydroelectric power are often impaired. Financial losses due to floods are typically millions of dollars each year, with the worst floods in recent U.S. history having cost billions dollars.

Some methods of flood control have been practiced since ancient times.[1] These methods include planting vegetation to retain extra water, terracing hillsides to slow flow downhill, and the construction of floodways (man-made channels to divert floodwater).[1] Other techniques include the construction of levees, dikes, dams, reservoirs[1] or retention ponds to hold extra water during times of flooding.

Many dams and their associated reservoirs are designed completely or partially to aid in flood protection and control.

In many countries, rivers prone to floods are often carefully managed. Defences such as levees, bunds, reservoirs, and weirs are used to prevent rivers from overflowing their banks. When these defences fail, emergency measures such as sandbags or portable inflatable tubes are used.

A weir, also known as a lowhead dam, is most often used to create millponds, but on the Humber River in Toronto, a weir was built near Raymore Drive to prevent a recurrence of the flood damage caused by Hurricane Hazel in 1954.

Coastal flooding has been addressed in Europe and the Americas with coastal defences, such as sea walls, beach nourishment, and barrier islands.

Tide gates are used in conjunction with dykes and culverts. They can be placed at the mouth of streams or small rivers, where an estuary begins or where tributary streams, or drainage ditches connect to sloughs. Tide gates close during incoming tides to prevent tidal waters from moving upland, and open during outgoing tides to allow waters to drain out via the culvert and into the estuary side of the dike. The opening and closing of the gates is driven by a difference in water level on either side of the gate.[2]

Another elaborate system of floodway defenses can be found in the Canadian province of Manitoba. The Red River flows northward from the United States, passing through the city of Winnipeg (where it meets the Assiniboine River) and into Lake Winnipeg. As is the case with all north-flowing rivers in the temperate zone of the Northern Hemisphere, snowmelt in southern sections may cause river levels to rise before northern sections have had a chance to completely thaw. This can lead to devastating flooding, as occurred in Winnipeg during the spring of 1950. To protect the city from future floods, the Manitoba government undertook the construction of a massive system of diversions, dikes, and floodways (including the Red River Floodway and the Portage Diversion). The system kept Winnipeg safe during the 1997 flood which devastated many communities upriver from Winnipeg, including Grand Forks, North Dakota and Ste. Agathe, Manitoba.

In the U.S., the New Orleans Metropolitan Area, 35% of which sits below sea level, is protected by hundreds of miles of levees and flood gates. This system failed catastrophically, with numerous breaks, during Hurricane Katrina in the city proper and in eastern sections of the Metro Area, resulting in the inundation of approximately 50% of the Metropolitan area, ranging from a few inches to twenty feet in coastal communities.

The Morganza Spillway provides a method of diverting water from the Mississippi river when a river flood threatens New Orleans, Baton Rouge and other major cities on the lower Mississippi. It is the largest of a system of spillways and floodways along the Mississippi. Completed in 1954, the spillway has been opened twice, in 1973 and in 2011.

In an act of successful flood prevention, the Federal Government of the United States offered to buy out flood-prone properties in the United States in order to prevent repeated disasters after the 1993 flood across the Midwest. Several communities accepted and the government, in partnership with the state, bought 25,000 properties which they converted into wetlands. These wetlands act as a sponge in storms and in 1995, when the floods returned, the government did not have to expend resources in those areas.[3]

In China, flood diversion areas are rural areas that are deliberately flooded in emergencies in order to protect cities.[4]

The consequences of deforestation and changing land use on the risk and severity are prone to discussion. In assessing the impacts of Himalayan deforestation on the Ganges-Brahmaputra Lowlands, it was found that forests would not have prevented or significantly reduced flooding in the case of an extreme weather event.[5] However, more general or overview studies agree on the negative impacts deforestation has on flood safety - and the positive effects of wise land use and reforestation.[6][7] 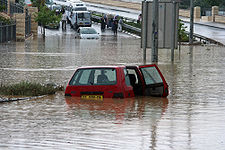 Flood blocking the road in Jerusalem

London is protected from flooding by a huge mechanical barrier across the River Thames, which is raised when the water level reaches a certain point (see: Thames Barrier).

Venice has a similar arrangement, although it is already unable to cope with very high tides. The defenses of both London and Venice will be rendered inadequate if sea levels continue to rise.

The largest and most elaborate flood defenses can be found in the Netherlands, where they are referred to as Delta Works with the Oosterschelde dam as its crowning achievement. These works were built in response to the North Sea flood of 1953, in the southwestern part of the Netherlands. The Dutch had already built one of the world's largest dams in the north of the country. The Afsluitdijk closing occurred in 1932.

Currently the Saint Petersburg Flood Prevention Facility Complex is to be finished by 2008, in Russia, to protect Saint Petersburg from storm surges. It also has a main traffic function, as it completes a ring road around Saint Petersburg. Eleven dams extend for 25.4 kilometres (15.8 mi) and stand 8 metres (26 ft) above water level.

Europe is at the forefront of the flood control technology, with low-lying countries such as the Netherlands developing techniques that can serve as examples to other countries facing similar problems.[10]

After hurricane Katrina, the US state of Louisiana sent politicians to the Netherlands to take a tour of the complex and highly developed flood control system in place in the Netherlands.[11] With a BBC article quoting experts as saying 70% more people will live in delta cities by 2050, the number of people impacted by a rise in sea level will greatly increase.[12] The Netherlands has one of the best flood control systems in the world and new ways to deal with water are constantly being developed and tested, such as the underground storage of water, storing water in reservoirs in large parking garages or on playgrounds,[12][13] Rotterdam started a project to construct a floating housing development of 120 acres (0.49 km2) to deal with rising sea levels.[14] Several approaches, from high-tech sensors detecting imminent levee failure to movable semi-circular structures closing an entire river, are being developed or used around the world. Regular maintenance of hydraulic structures, however, is another crucial part of flood control[15]

There are many disruptive effects of flooding on human settlements and economic activities. However, flooding can bring benefits, such as making soil more fertile and providing nutrients in which it is deficient. Periodic flooding was essential to the well-being of ancient communities along the Tigris-Euphrates Rivers, the Nile River, the Indus River, the Ganges and the Yellow River, among others. The viability for hydrologically based renewable sources of energy is higher in flood-prone regions.