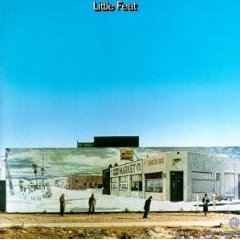 "Little Feat" was the ous debut by the American rock band , released in January 1971. Cobbled together from a variety of recording sessions mostly between August and September 1970, its sound can be best described as the antithesis to any of the group's classic recordings (such as 1973's "Dixie Chicken" and 1978's "Waiting For Columbus".) Featuring the Mk. 1 line-up of the group, with on bass, it was the first of eight albums by the group before their 1979 break-up.

The blues which accented the group's later recordings were in full force on "Little Feat". Utilizing slide guitar legend , the group knocked off a medley of two songs, "Forty Four Blues" and "How Many More Years". The coming together of bizarre lyrics and superb instrumentation that dominated all Little Feat albums through Lowell George's tenure as leader were debuted with the dark "Hamburger Midnight". The brilliant slices of American life that were present on each album were debuted with "Strawberry Flats" and "Willin'" (the latter destined for a reworking on ""). The tender side of the group was exemplified with tracks like "Truck Stop Girl" and "I've Been The One".

Due to its relative failure commercially (only selling about eleven thousand copies), the group never again attempted to record anything like it.