Omar Efraín Torrijos Herrera (February 13, 1929 – July 31, 1981) was the Commander of the Panamanian and National Guard and the de facto leader of Panama from 1968 to 1981. Torrijos was never officially the president of Panama, but instead held titles including "Maximum Leader of the Panamanian Revolution" and "Supreme Chief of Government." Although he was considered a leftist dictator, he simultaneously had the support of the United States as he opposed communism. His politics were based instead on progressivism.

Torrijos is best known for negotiating the 1977 Torrijos–Carter Treaties that eventually gave Panama full sovereignty over the Panama Canal, at noon on December 31, 1999. His son Martín Torrijos was elected president and served from 2004 to 2009.

Torrijos was born in Santiago in the province of Veraguas, the sixth of twelve children. His father, José Maria Torrijos, was originally from Colombia, and was employed as a teacher. He was educated at the local Juan Demóstenes Arosemena School and won a scholarship to the military academy in San Salvador. He graduated with a commission as a second lieutenant. He joined the Panamanian army, the National Guard (Guardia Nacional), in 1952. He was promoted to captain in 1956 and took a cadet course at the School of the Americas in 1965.

Omar Torrijos (right) with farmers in the Panamanian countryside. The Torrijos government was well-known for its policies of land redistribution.

He had reached the rank of lieutenant colonel by 1966 and in 1968 he and Major Boris Martínez led a successful coup d'état against the recently elected president of Panama, Arnulfo Arias, after only eleven days in office, when he tried to order Torrijos to a foreign post. Although a two-man junta was appointed, Martinez and Torrijos were the true leaders from the beginning. Soon after the coup, Torrijos was promoted to full colonel and named commandant of the National Guard. They barred all political activity and shut down the legislature. They also seized control of three newspapers owned by Arias' brother, Harmodio and blackmailed the owners of the country's oldest newspaper, La Estrella de Panama, into becoming a government mouthpiece.

In the internal power struggle that followed Torrijos emerged victorious — he exiled Martínez in 1969 and promoted himself to brigadier general.

In 1972, the regime held a controlled election of an Assembly of Community Representatives, with a single opposition member. The new assembly approved a new Constitution and elected Demetrio Lakas as president. However, the new document made Torrijos the actual head of government, with near-absolute powers for six years.

Torrijos was regarded by his supporters as the first Panamanian leader to represent the majority population of Panama, which is poor, Spanish-speaking, and of mixed heritage– as opposed to the light-skinned social elite, often referred to as rabiblancos ("white-tails"), who had long dominated the commerce and political life of Panama. He opened many schools and opened job opportunities for the less fortunate. Torrijos instituted a range of social and economic reforms to improve the lot of the poor, redistributed agricultural land and persecuted the richest and most powerful families in the country, as well as independent student and labor leaders. The reforms were accompanied by an ambitious public works program, financed by foreign banks.

Torrijos also negotiated the Torrijos-Carter Treaties over the Panama Canal, signed on September 7, 1977. These treaties passed United States sovereignty over the canal zone to Panama, with a gradual increase in their control over it, leading to complete control on Dec 31, 1999. The United States however, retained the permanent right to protect what they see as the neutrality of the canal. The ratification ceremony at Fort Clayton was somewhat of an embarrassment for Torrijos. He was noticeably drunk during the ceremony; his speech was badly slurred and he had to brace himself against the podium to keep from falling.[1] {In 2006 Torrijos son President Martin Torrijos passed the Panama Canal expansion project}

On the debit side, Torrijos was extremely intolerant of political opposition. Many opponents were imprisoned, exiled, killed, or "disappeared". Also, the public works project was plagued by corruption and nepotism, which turned Panama into one of the countries with the highest per capita ratio of public indebtedness.[2]

In 1978, he stepped down as head of the government, but remained de facto ruler of the country while another one of his followers, Aristides Royo was a figurehead president. He also restored some civil liberties; U.S. President Jimmy Carter had told him that the Senate would never approve the Canal treaties unless Torrijos made some effort to liberalize his rule.[1] He planned to return the country to full civilian rule by 1984.[2] 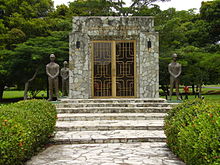 General Torrijos died at the age of 52 when his aircraft, a DeHavilland Twin Otter (DHC-6), registered as FAP-205 of the Panamanian Air Force, crashed near Penonome, in the Republic of Panama at Cerro Marta of the community of Coclesito. The aircraft disappeared from radar during severe weather, but due to the limited nature of Panama's radar coverage at the time, the plane was not reported missing for nearly a day. The crash site was located several days later, and the body of General Torrijos was recovered by a Special Forces team in the first few days of August.[3] His death caused an national mourning around the country, especially in the poverty area. Following a large state funeral, Torrijos was briefly buried in a cemetery in Casco Viejo (the Old City of Panama), before being moved to a mausoleum in the former Canal Zone on Fort Amador near Panama City. He was succeeded as commander of the National Guard and de facto leader of Panama by Florencio Flores, who later gave way to Rubén Darío Paredes. Actually, the place where the plane crashed is a national park and his house in Coclesito is now a museum.

Speculations on cause of crash

Torrijos' death generated charges and speculation that he was the victim of an assassination plot. For instance, in pre-trial hearings in Miami in May 1991, Manuel Noriega's attorney, Frank Rubino, was quoted as saying "General Noriega has in his possession documents showing attempts to assassinate General Noriega and Mr. Torrijos by agencies of the United States."[4] Those documents were not allowed as evidence in trial, because the presiding judge agreed with the U.S. government's claim that their public mention would violate the Classified Information Procedures Act. More recently, former businessman John Perkins alleges in his book Confessions of an Economic Hit Man, that Torrijos was assassinated by American interests, who had a bomb planted aboard his aircraft (by CIA organized operatives).[5] The alleged motive is that some American business leaders and politicians strongly opposed the negotiations between Torrijos and a group of Japanese businessmen led by Shigeo Nagano, who were promoting the idea of a new, larger, sea-level canal for Panama. Manuel Noriega, in America's Prisoner, claims that these negotiations had evoked an extremely unfavorable response from American circles. However, the documents with the investigations about the cause of the accident were missing during the U.S. invasion in Panama on December 20, 1989 and never found. Torrijos died shortly after the inauguration of US President Ronald Reagan, just two months after Ecuadorian president Jaime Roldós died in strikingly similar circumstances.

Omar Torrijos is well known in Panama for his famous quotes. Here are some examples: