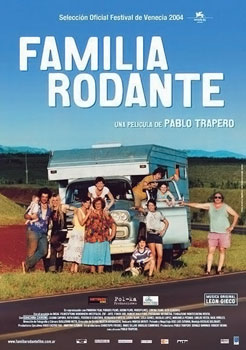 "Familia rodante" (English: "Rolling Family") (2004) is a , written and directed by , and produced by various countries, including . The film's executive producers were Hugo Castro Fau and Martina Gusman, and it was produced by Pablo Trapero, Robert Bevan, and Donald Ranvaud. [ [http://www.imdb.com/title/tt0359254/ "Familia rodante"] at the .]

The picture is about a large Argentine family that takes a northern 1000 plus kilometer road trip in an old cramped motor-home to attend a wedding. The family takes part in many adventures along their way to the wedding.

The comedy-drama tells the story of Emilia () an 84 year-old grandmother who lives in the Buenos Aires suburbs and receives a phone call inviting her to be the matron of honor at her niece's wedding in Misiones, the village of her birth.

The Province of Misiones, where the village is located, is over 1000 kilometers away, on the Brazilian border in the farthest north-east part of Argentina.

Nevertheless, the large family decides to embark on a weekend long trip to take their grandmother to the wedding in a beat-up motor-home.

While the members have feuds, intrigues and love affairs on the journey, they, mostly, have to accept each others quirks and faults, and give each other a lot of space along the way as they encounter a few problems on their long road-trip.

The film ends with Emilia in an introspective moment. She drinks her mate and appears to contemplate her family and life.

The grandmother in the film () is Trapero's actual grandmother. In fact, she's present in all of Trapero's films. She's seen by the director as the story's conscience. [ [http://www.fipresci.org/world_cinema/south/south_english_argentinean_cinema_pablo_trapero.htm Lerer, Diego] . , "Cinemas of the South: Pablo Trapero: Family Pictures," 2006.]

Filming locations
The picture was filmed in and ; .

* as Emilia, the grand-mother and matriarch of the family.
* Bernardo Forteza as Oscar, the hot-head and overweight uncle married to Marta. He's in charge of the driving.
* Liliana Capurro as Marta, who's married to Oscar and spurns the advances made by Ernesto.
* Ruth Dobel as Claudia, a very emotional woman and married to Ernesto.
* Carlos Resta as Ernesto, who, although married, wants to revive a sexual relationship with Marta, his long ago girlfriend.
* Raul Viñona as Gustavo, and is the kissing cousin of Yanina. He also lusts after her girlfriend Nadia.
* Marianela Pedano as Yanina, is a teenager in love with her cousin Gustavo and later hooks-up with a member of the wedding.
* Leila Gomez as "'Nadia," and the girlfriend of Yanina. She lusts after Gustavo.
* Laura Glave as Paola, who's a young mother and in love with Claudio.
* Nicolás López as Matias, in his teens and along for the ride.
* Federico Esquerro as Claudio, is irresponsible and in love with himself according to the film's trailer in English.

It screened at various film festivals, including: the Rio de Janeiro International Film Festival, ; the , ; the , USA; the Nantes Festival, France; the , USA; and others.

Stephen Holden, film critic for "," liked the film and the direction of Pablo Trapero, and wrote, "Don't fret if you find it frustrating to unscramble the blood ties or follow the fragmented domestic dramas that jostle one another in Pablo Trapero's bighearted ensemble comedy...Without becoming intimate with any one person, you come to know them collectively." [ [http://movies2.nytimes.com/2004/10/11/movies/11fami.html?ex=1172811600&en=c4289c29b0880a20&ei=5070 Holden, Stephen] . "The New York Times," film review, "A Family on the Road, With No Air-Conditioner," , 2004.]

"" film reviews wrote, " [I] t becomes clear we’ve seen a film of subtlety and wisdom, a shaggy-dog story about learning to deal with disappointment, compromise, confusion and loss: learning, in short, to survive life in all its painful truth and beauty." [ [http://www.timeout.com/film/81607.html "Time Out"] . Time Out London, film reviews, Issue 1839: November 16-23 2005. Last accessed: , .]

Film critic Diego Lerer, a member of , wrote an extensive essay on Pablo Trapero's cinema works. He said of the film, "The 'families' in "Rolling Family" are already morally 'corrupted.' It is never clearly spoken, but one of the reasons is obvious: they live in the capital. They have urbanised, diversified and standardised themselves; they are no longer the safeguard against problems, but are now a part of them, and perhaps among the most serious ones...the characters are presented in a much crueler and hostile way, and the filmmaker does not just look at 'the others' with a dark gaze, but also at 'us'." [Lerer, Diego. Ibid.]

Critic Neil Young wrote, "Familia rodante" nimbly dramatises the clash between old ways and new, making this a socially-conscious road movie with genuine texture and warmth... [the] [s] tar of the show is Chironi, very much front-and-centre as Emilia - the actress is actually Trapero's own grandmother, and as well as making some subtle points about family, maturity and the state of Argentina, it also works very well as a heartfelt, elaborately autobiographical tribute/farewell to a beloved relative." [ [http://www.jigsawlounge.co.uk/film/content/view/244/1/ Young, Neil] . "Neil Young's Film Lounge," film review, October 31, 2005.]