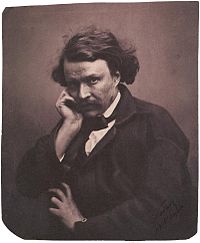 Félix Nadar was the pseudonym of Gaspard-Félix Tournachon (1 April 1820, Paris – 23 March 1910), a French photographer, caricaturist, journalist, novelist and balloonist. Some photographs by Nadar are marked "P. Nadar" for "Photographie Nadar" (see image below). 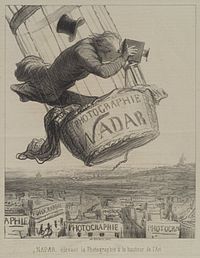 1863: Disaster with "Le Géant" at Neustadt am Rübenberge at Hanover. Illustration in a newspaper

Nadar was born in April 1820 in Paris (though some sources state Lyon). He was a caricaturist for Le Charivari in 1848. In 1849 he created the Revue comique and the Petit journal pour rire. He took his first photographs in 1853 and in 1858 became the first person to take aerial photographs. He also pioneered the use of artificial lighting in photography, working in the catacombs of Paris.

Around 1863, Nadar built a huge (6000 m³) balloon named Le Géant ("The Giant"), thereby inspiring Jules Verne's Five Weeks in a Balloon. Although the "Géant" project was initially unsuccessful Nadar was still convinced that the future belonged to heavier-than-air machines. Later, "The Society for the Encouragement of Aerial Locomotion by Means of Heavier than Air Machines" was established, with Nadar as president and Verne as secretary. Nadar was also the inspiration for the character of Michael Ardan in Verne's From the Earth to the Moon.

On his visit to Brussels with the Géant, on 26 September 1864, Nadar erected mobile barriers to keep the crowd at a safe distance. Up to this day, crowd control barriers are known in Belgium as Nadar barriers.

From 1895 until his return to Paris in 1909, the Nadar photo studio was in Marseilles (France).

Nadar died in 1910, aged 89. He was buried in Père Lachaise Cemetery in Paris.