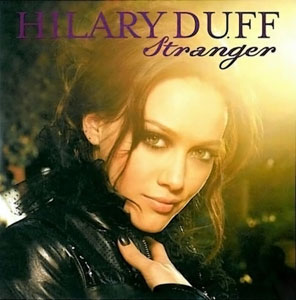 "Stranger" is a song written by , , , and Julius Diaz, and recorded for Duff's third studio album, "Dignity" (2007). It features elements of , particularly that of India, and aspects of were incorporated into the accompanying -directed music video, which Duff cited as her best video at the time. She said that contrary to rumors, the song was inspired by the strained relationship between her parents and not by her ex-boyfriend, .

Internet feedback from Duff's fans led to the release of "Stranger" as the third and last single from "Dignity" in , where it was released in July 2007 (see ). It was a number-one club hit in the , but it became Duff's lowest peaking song on the "Billboard" Hot 100 chart. In the , where "Stranger" was the album's second single, a -produced remix of the song was released in September 2007.

According to Duff, the song is actually about how she thought her mother feels around her father, who had an extramarital affair with another woman. Duff said she wrote "Stranger" to appear to be about one of her own relationships, because she didn't want people to know about the strained relationship between her parents.

A writer for gave the song three stars, commenting on how it "continues the more grown-up, serious side of Hilary Duff"; he called the vocals "definitely more in the ballpark of 'husky' rather than 'impressive'" and said the Eastern sound owed much to songs such as the ' "Buttons". Although he stated he would prefer "Danger", another song on "Dignity", to be a single, he said "Stranger" " [wouldn't] sound out of place on a album, which suggests to me that she's done a passable job of leaving behind her bubblegum past", and that it made him " [do] a fair bit of seat-dancing". [ [http://www.bbc.co.uk/blogs/chartblog/2007/06/hilary_duff_stranger.shtml "Chart Blog - Hilary Duff - 'Stranger'"] . . . Retrieved .]

A review from Music Focus called the track "unashamedly pop" and said that it was "one of the strongest cuts from Duff's latest album and pushes her into a maturer pop sound". They gave the song a positive review, adding that "Stranger" "need [ed] to be a success" and was "cool, confident slice of dance pop and some of Duff's best work to date". [ [http://music.entertainment-focus.com/reviewsingle142.php "Hilary Duff - Stranger"] . Music Focus. . Retrieved .] Gary Lancaster of TeenSpot gave the song four stars, calling it an "example of how a modern pop anthem really should sound". He also called it "sleek and sophisticated" and a "catchy, chart worthy track". [Lancaster, Gary. [http://www.teenspot.com/reviews/view.html?id=292 "Review - Hilary Duff"] . TeenSpot.com. . Retrieved .] The song was well-received by "Billboard" reviewer Chuck Taylor, who called it "uptempo" and "dance-friendly", but said that "Top 40 is a tough call". [Taylor, Chuck. [http://www.billboard.com/bbcom/content_display/reviews/singles/e3i2530f60f036b288e372149b2a2b9f1c3 "Stranger - Hilary Duff"] . "Billboard". 2007. Retrieved .]

In mid April 2007, in a post on Duff's blog, she told her fans that they could vote for what they thought should be the next single from "Dignity". [ [http://www.hilarynews.com/2007/04/17/new-hilary-duff-blog-post/ "New Hilary Duff blog post"] . hilarynews.com; original post on hilaryduff.com only available to members of her official fan club. . Retrieved .] According to a later post, fan feedback via votes was "overwhelmingly" in favor of "Stranger" as the next single.

In mid-2007, concurrent to the preparation of the radio release of "Stranger", Duff was featured in a bikini on the July covers of the magazines "" and "Shape", and on the August cover of "Maxim" accompanied by the declaration that she had gone "from the queen of teen to breakout sex symbol".

The single was released to U.S. mainstream stations on .

"Stranger" entered the Italian Singles Chart at number six (its peak position) in late June. The club mix of the song was premiered at the opening party of the nightclub Space, which named it "Single of the Week" in its weekly .

The video for the single was directed by and shot in , including at a mansion in Silver Lake, between and .

The video begins with Duff's character running out of her home to look for her romantic partner (played by model ), who drives away. It cuts to her waking up and finding a letter and a bracelet, and then shows Duff watching a woman seducing her partner. At a dinner party, Duff's partner kisses her and then flirts with the other woman. The video cuts to a scene at a lounge where dancers entertain the guests, among whom are Duff's partner and two other men. Duff's partner flirts with one of the dancers. Recurring shots of Duff wearing a hooded jacket are edited into the video. The second verse begins with Duff

Bill Lamb of named it the week's "Friday Fun Video", writing "Visually, this is probably Hilary Duff's best video yet." [Lamb, Bill. [http://top40.about.com/b/a/209145.htm "Friday Fun Video - Hilary Duff - Stranger"] . . Retrieved .] "Blender" magazine wrote, "Her dancing skills are still a tad stilted but she makes up for it with some key "despondent" and "perturbed" acting faces", also noting what it described as "shameless close-ups of a certain cell phone".

For the WaWa mix of the song, another edit of the video was released. [http://www.youtube.com/watch?v=gnR5219jXco] [http://new.uk.music.yahoo.com/Hilary-Duff/videos/view/Stranger--WAWA-Remix---45593795]