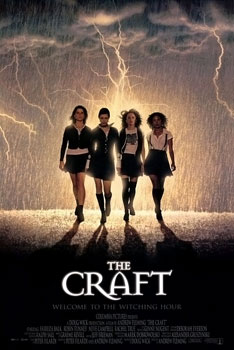 "The Craft" is a 1996 directed by and starring , , and . The original music score was composed by . The film's tagline is: "Welcome to the witching hour."

Sarah Bailey, a troubled young girl, moves to from , and meets three friends who teach her about the world of . As they explore the extent of their abilities, the four experience good fortune, and put s on their enemies. Sarah, played by Robin Tunney, becomes increasingly separated from the other three girls, and soon finds that her best friends can become her worst enemies. She later discovers that her late mother was a powerful witch, and unlike the other girls, she has the inherent gift of witchcraft herself.

Sarah Bailey has just moved from San Francisco to L.A. with her father and . She enrolls at the local high school, but struggles to fit in as the "new kid." A group of three girls who dabble in witchcraft believe that someone will arrive to be their "fourth", complete their circle and make a full .

During a French class one of the three girls, Bonnie, witnesses Sarah balancing a pencil on its tip and causing it to rotate while standing upright. Bonnie then tells her friends that Sarah is their "fourth." Afterwards, Sarah is hit on by Chris, the school's football star. He tells her to stay away from the three girls because they are witches. At Chris's invitation, Sarah comes to watch his football practice, where the three girls introduce themselves as Bonnie, Nancy and Rochelle. They befriend Sarah and take her to an occult shop the girls frequently visit. Bonnie, Nancy and Rochelle steal things for their rituals, but the owner notices that Sarah is not like the other girls. Sarah tells the shop keeper that she doesn't follow witchcraft. Lirio, the owner, says "Maybe you are a natural witch; your power comes from within." Later on, the girls tell Sarah about "invoking the Spirit," Manon. Sarah leaves the girls and goes to meet Chris.

The following day at school, Sarah discovers that Chris has lied and told the whole school that he and Sarah slept together. During diving practice Rochelle is racially abused by another girl, Laura Lizzie, while Bonnie goes to hospital for treatment for the burn scars that cover her back. The next day, Nancy tells Sarah they are planning a field trip. They take the bus out to the country and find a quiet place. The four girls call the corners and cast some spells: Rochelle asks for the strength not to hate those who hate her; Sarah performs a love spell on Chris; Bonnie asks for beauty inside and out; and Nancy asks for "all the power of Manon."

Shortly after the spells are cast, they show signs of working: Chris becomes infatuated with Sarah, Bonnie's scars have been miraculously healed, and the next time Laura bullies Rochelle, Laura's hair begins falling out. Later at Bonnie's house the girls play a game and succeed in levitating Rochelle. At home, Nancy causes her abusive Ray to have a heart attack, and he dies. Nancy and her mother find out that they have inherited $175,000 from an . The girls go to visit Nancy at her new , and experiment with glamouring (disguise) spells. They go to Lirio's shop again, where Nancy finds a book about "invoking the Spirit" and, despite Lirio's warnings about invoking the Spirit being dangerous, buys it. Later that night, the girls go to the beach and form a circle, where they call on Manon. At the culmination of the spell Nancy is struck by . The next day the girls witness Nancy walking on the water and find s washed up on the shore and Nancy says that these are gifts from Manon.

Sarah begins to question their magic. At school, Rochelle finds Laura in the showers with all of her hair falling out, and she is shocked that her magic has caused such damage. Chris, still infatuated with Sarah, persuades her to go on a date with him. On the date, Chris attempts to rape Sarah, who manages to get away and tells the other girls. Nancy says he has to pay and finds him at a party, where she disguises herself as Sarah to fool Chris into kissing her. When Sarah arrives and tells Nancy to leave, Nancy becomes enraged and causes Chris to fall out a second-story window, killing him. Shocked at Nancy's abuse of her magic, Sarah tries to bind her powers, but Nancy warns her not to try it again.

Sarah goes to the only person she can think of who can help her: Lirio. Lirio tells her that to fight the other girls she must invoke the spirit herself. Lirio also reveals the reason why Sarah already has some powerful natural magic of her own (before she met Nancy and the rest), was because her mother was an amazingly powerful white witch, one of the best in fact, and Lirio knew her. At home, Nancy and the others torment Sarah, saying that her father and stepmother had been killed in a plane crash and cause her to see rats, snakes and insects all over the house. Nancy and the other two girls confront Sarah and suggest that Sarah should kill herself; Nancy goes so far as to write a suicide note for Sarah and slash her wrists, right across the scars from a suicide attempt. Sarah runs upstairs to her room in horror. As she lies bleeding in her room she tries to invoke Manon, but is too weak. She hears her mother's voice whispering to her, telling her, "Don't be afraid, reach inside yourself." With new strength, Sarah is able to invoke Manon and her wounds are healed.

Downstairs, Rochelle tells Nancy that they should stop tormenting Sarah and that what they are doing is getting out of hand. When Nancy threatens the other girls, they go upstairs to find Sarah. However, Sarah's invocation of Manon allows her to show the girls some illusions: When Bonnie and Rochelle stumble across a mirror, they see themselves transformed by spells they have cast on others. (Rochelle's reflection shows her hair falling out, and in Bonnie's reflection, her scars have covered her face.) Panicked, the girls flee, leaving only Nancy and Sarah. Nancy, armed with an , comes looking for Sarah, and the girls have a showdown; ultimately, Nancy is defeated by Sarah, who binds Nancy's power to prevent her from doing any more harm.

The following day Rochelle and Bonnie come to apologize to Sarah, but it seems they are more interested about whether Sarah has retained any of her powers. When Sarah doesn't answer, the girls snidely assume Sarah has lost her powers, just as they have. However, the wind suddenly picks up, clouds rumble overhead, and a tree is struck by lightning, causing a branch to nearly hit the two girls. Sarah coolly tells them, "Be careful. You don't want to end up like Nancy."

The next scene shows Nancy strapped to a bed in a psychiatric hospital with scratches all over her face, screaming about her powers (" I can Fly!") until a nurse sedates her.

The film employed state-of-the-art s, presenting "" and pagan behavior to the in an attractive package. Through this exposure, many teenage viewers gained an interest in /, and especially . Though some of the interest waned, the movie helped lesser known s come into the spotlight for a time.

The musical group recorded the song "" which was originally sung by 80's music group , for the film. Two years later, the WB television series "" was created, also centered on young witches in , and used the same song for its theme song. On the DVD commentary, the director wryly comments on this, stating of , producer of "Charmed", that "you've got to give the man credit for originality".